Welcome to the Markets Monthly!

We are still fine tuning our new format from January and would love to hear your feedback on how we reflect the market, analysis, new deals and selected reading.

For more information on the Climate Bonds Database on Market Data mail to: dataenquiries@climatebonds.net

Climate Bonds Connected is our new online programme to stay connected with us for all the latest transition, green & sustainable finance developments. It includes webinars, podcasts and blogs on a variety of topics. Look out for our first Markets Monthly Podcast due next week.

Coming up: Focus on Asia

In partnership with HSBC, we will launch our ASEAN Green Finance State of the Market report on 16th April. Sign up for the launch webinar here. Later in April we will publish our Vietnam Green Infrastructure Opportunities (GIIO) report. This will be followed by our inaugural Vietnam Green Infrastructure Investment Opportunities (GIIO) report (dates and webinar TBA). New reports on green finance in Japan, China and Hong Kong are all in the pipeline. 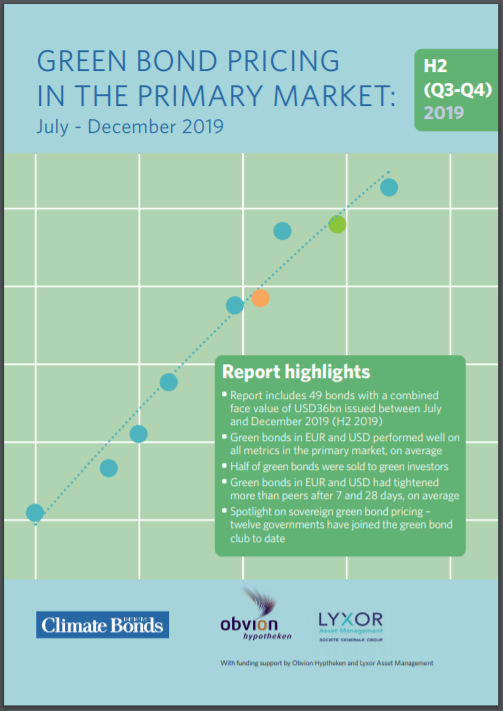 The report monitors the performance of 36 EUR and 13 USD denominated benchmark size green bonds with a total value of USD36bn issued during H2 2019 with spotlight on Green Sovereigns and emerging greenium. Read the Environmental Finance story. 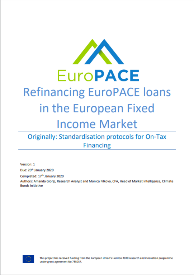 “EuroPACE”, a project funded by the European Commission, seeks to boost energy efficiency investments for buildings in Europe and has been developed by a number of NGOs and organisations under the EuroPACE Consortium umbrella. As a member of the EuroPACE Consortium, the Climate Bonds Initiative has worked on a series of reports aimed at supporting the uptake of the programme.

March at a glance

Overall March 2020 issuance added up to USD2.8bn, translating into an 83% year-on-year decrease and down from USD15.6bn in February 2020. This is the lowest monthly issuance volume since December 2015.

The COVID-19 outbreak has had a visible impact on all financial markets, including the debt capital market and green bond segment. The disruption has left companies and governments shift into crisis mode. However, while countries tackle the pandemic and its economic impact, talk is already shifting to the role capital markets can play in economic recovery. Increasingly voices are calling on governments and regulators to ensure a green and sustainable slant to measures supporting stabilisation and recovery. Bloomberg suggests that government stimulus could be attached to emissions-cutting projects, such as tax breaks for buyers of electric cars or subsidies for energy efficient homes.

The IEA argues that the transition to green energy should be front and centre in government stimulus plans, whereas the EU's Environment, Public Health and Food Safety Committee Pascal Canfin points out the importance of connecting fiscal stimulus packages to the EU’s Green Deal. EBRD echoes this, stating that governments should utilise “green tilting” and build stimulus packages round climate action and resilience, and support towards green firms. European Commission’s President Ursula von der Leyen said that priorities of the new long-term budget – namely digitalisation, decarbonisation and resilience – are not going to change. The World Bank states in a blog post that response measures to the crisis are already identified on projects around climate change adaptation.

Nevertheless, new bonds whose proceeds contribute to advancing sustainable development can still be seen in the market. The State Bank of India (SBI) just issued a USD100m Certified Climate Bond. Medical multinational Pfizer came out with a sustainability bond for social and environmental impact. The deal will finance the company’s environmental impact management (the bond is moved from the main Climate Bonds Green Bond Database and added to the Sustainability Bond sub-segment). It will also fund initiatives to facilitate access to the company’s products which includes addressing the COVID-19 pandemic and the threat of antimicrobial resistance. This is the first labelled sustainability bond from a biopharmaceutical company.

As recent developments have shown, innovative green structures are being used by an increasing number of organisations: forestry company UPM from Finland is one of the first companies to link the pricing mechanism of a syndicated revolving credit facility to biodiversity as well as climate targets. Spanish wind turbine manufacturer Siemens Gamesa entered into an interest rate swap with an ESG trigger which incentivises the company to improve its ESG rating. 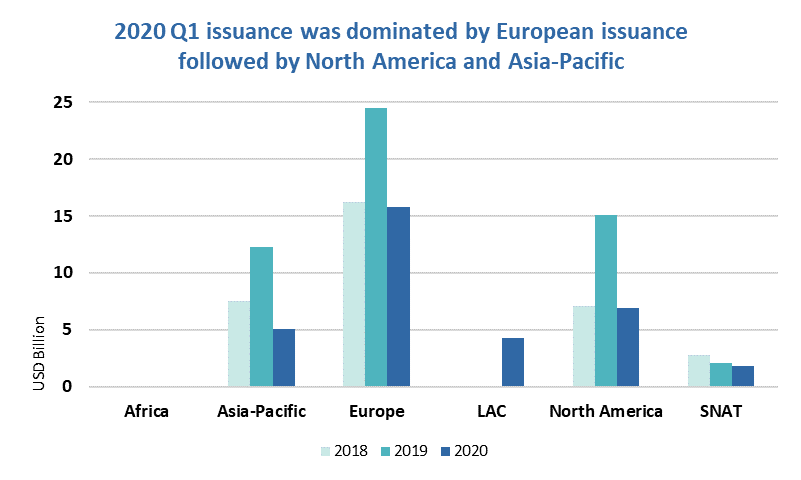 Overall, 2020 issuance is now at USD33.9bn, mainly coming from Europe with North America ranking second and Asia-Pacific third. As expected, for each region, a clear decline was recorded as compared to last year’s Q1 volumes. This month, the major share of issuance came from Asia-Pacific with an equivalent of USD1.7bn, making up 61% of total March volume.

Out of individual countries, China contributed USD786m and Japan USD714m; with the US in third at USD489m. China issuance amounted to USD147m in January this year and USD142m in February. The largest deals came from JRTT (Japan) with JPY42.6bn (USD388m) and Russian Railways (Russia) with CHF250m (USD257m). Both organisations use Climate Bonds Programmatic Certification process for repeat issuers. 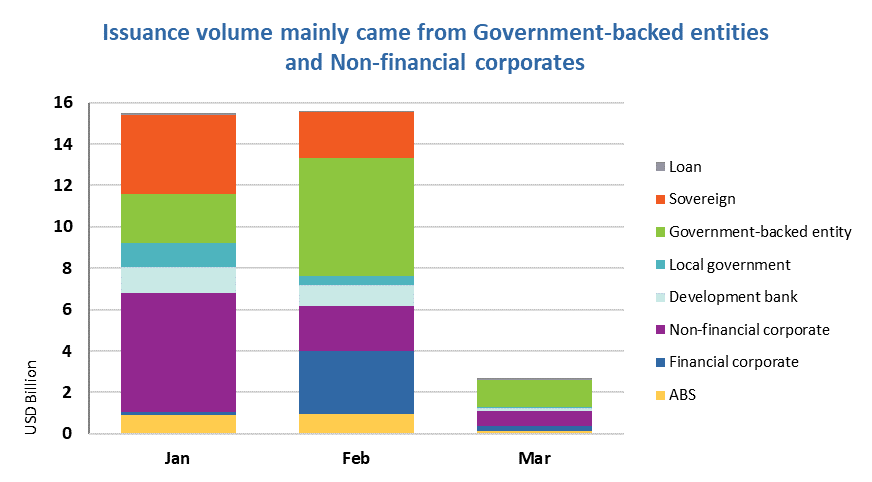 No green sovereign issuance took place in March. The main issuer types were Government-backed entities and Non-financial corporates. Included in the latter group is Konan Ultra Power from Japan, whose JPY60m (USD1m) deal will finance LED lighting projects and is their second green instrument to date.

Proceeds from other green issuances mainly funded Low-carbon Transport and Buildings with three deals from China solely financing projects in either of these two categories. The month also marked the first time since the inaugural green bond of May 2019 that Russian issuers tapped into the market in two consecutive months. Repeat issuer, Russian Railways will finance the purchase of electric trains and the phase out of diesel and older electric trains.

To complement their existing Portfolio Impact Analysis Tool for Banks, the UNEP FI launched tools aiming to help the private sector to measure and manage the impact of their activities – Green Finance Platform

> Check out the full list of new and repeat issuers.

> Click on the issuer name to access the new issue deal sheet in our online Bond Library.

Local Government Super (AUD65m/USD38m), Australia, took out its debut green loan Certified against the Low Carbon Buildings (Commercial) Criteria of the Climate Bonds Standard. LGS is an Australian superannuation (pension) fund and manages the Local Government Property Fund whose portfolio holdings include commercial real estate assets. The proceeds will refinance the issuer’s investments in several office buildings. Annual reports will be made available directly to the lender and will have information regarding the allocation of the proceeds and the properties themselves.

Westpac, already a prominent green issuer in the Australian market, partnered with LGS on the deal. This marks the first superannuation fund in the world to receive Certification under the Climate Bonds Standard.

Taweelah IWP (USD785m), UAE, issued its debut green Sukuk in September 2019. The 32-year instrument benefits from an SPO issued by Vigeo Eiris and will finance a water desalination project in the Taweelah complex in Abu Dhabi, UAE. This includes the design, construction and maintenance of a reverse osmosis plant, related infrastructure and facilities. The project is scheduled for completion by 2022. A photovoltaic power plant complementing the energy supply from the grid is also included in the project plan.

Climate Bonds view: This is the fourth issuer from the UAE joining the green bond market with the second largest issuance so far. The deal will contribute to the country’s Energy Strategy 2050, which includes a target to reduce the national carbon footprint linked to power generation by 70%. It also takes action on one of the most pressing issues accompanying climate change: water stress. By building the largest reverse osmosis plant in the world, this investment helps ensure secure national water supply. In the MENA region, most of the green bonds to date have come from the UAE. We hope that other countries will recognise the opportunity and follow the lead.

Attend Ambiental (BRL55m/USD13m), Brazil, completed its debut issuance in October 2019 with a 7-year green bond. Sitawi provided an SPO on the issuer’s framework, which includes plans to allocate funding towards the refinancing of expenses for an industrial waste treatment facility in Barueri (State of São Paulo). The expenses refer to a loan obtained from US Bank and Corporación Interamericana para el Financiamiento de Infraestructura (CIFI) – itself a green bond issuer – to finance the construction and extension of the plant, as well as investments in the four pre-treatment lines.

Climate Bonds view: Sabesp, one of the issuer’s parent companies, was identified in our analysis of potential public sector issuers in LatAm (as a state-owned entity). This deal reaffirms that there is huge scope to increase green infrastructure investments in Brazil and the broader region, which in the case of Attend Ambiental’s plant will contribute towards cleaner soils and water supply while promoting water conservation, biodiversity and human health.

Edra Solar Sdn Bhd (MYR245m/USD59m), Malaysia, finalised its inaugural issuance in October 2019 with a green Sukuk maturing in 18 years. The deal refinances up to 80% for the development of the 50MW Kuala Ketil Solar Farm, including the design, construction, ownership, operation and maintenance of the plant. Edra Solar has allocated a buffer zone surrounding the facility to the local community for the cultivation of pineapples and/or other crops.

There will be allocation and impact reporting through different channels, including annual reports or website updates. Allocation reporting will include originally allocated and utilised amounts to eligible projects as well as the unutilised amount and where it is placed or invested until utilisation. Impact reporting will, where feasible, include impact objectives from the eligible projects, such as the installed capacity of the plant, the annual electricity generated and GHG emissions avoided, the number of farmers supported and jobs created, and the revenue generated for the community.

Climate Bonds view: So far, some USD1.3bn in green bonds have been issued by Malaysian organisations. Edra Solar Sdn Bhd is the 9th issuer from Malaysia, where mainly non-financial corporates have previously come to market. Deals have mainly financed renewable energy, and this is the second green bond to partially finance agriculture projects. Merging these two and involving the local community shows how well different initiatives can be combined and leveraged together. The project will directly contribute to Malaysia’s goal of 20% renewable energy by 2025.

Climate Bonds view: This marks the third US Muni issuer from Rhode Island with the largest amount to date. In the green Muni space, 61% of the deals (bond count) are USD100m or below in size. It is therefore encouraging to see a larger deal hit the market, especially from a state that currently ranks 20th in overall amount issued (USD182m excluding this deal).

We do encourage post-issuance disclosure to the extent possible.

Visit our Bond Library for more details on March deals and a full history of debut green issuances going back to 2017.

For April, we’ve picked out ten deals that have been announced/issued already (see table above). Two of these are Swedish companies and both longstanding market participants: Vasakronan with two deals and Rikshem AB with one. Wuhan Metro Group Co., Ltd (China) sought funding for Low-carbon Transport. E.ON SE (Germany) and Iberdrola (Spain) are scheduled to issue later this month to finance Energy projects.

Due to the ongoing COVID-19 situation, some organisations seem to be focusing less on issuing green bonds. Nevertheless, Deutsche Bank (Germany) states in their Non-Financial Report 2019 that they are likely to issue a green bond this year. 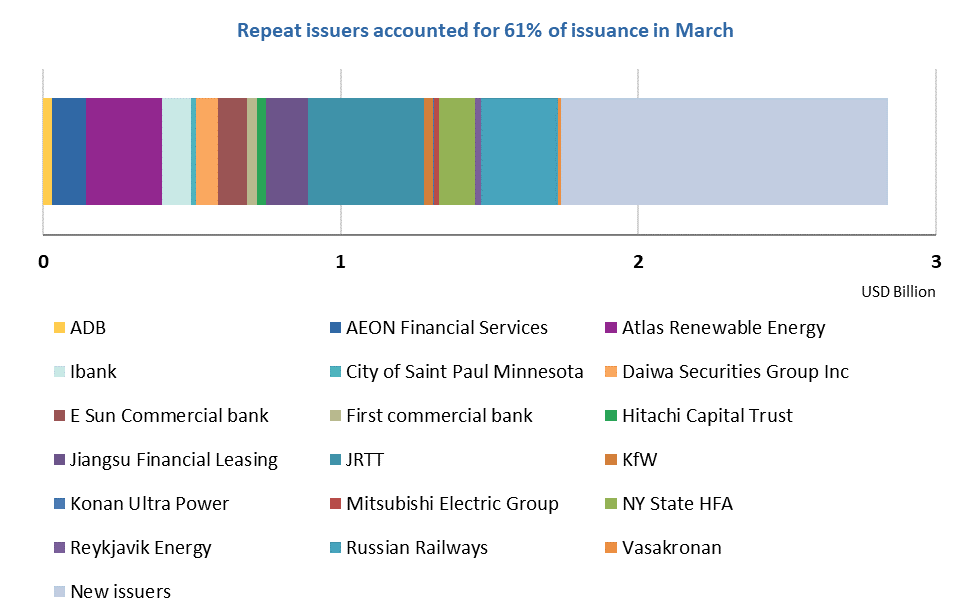 As always, your feedback is welcome!

Watch this space for more market developments. Follow our Twitter or LinkedIn for updates. E-mail data requests to dataenquiries@climatebonds.net.