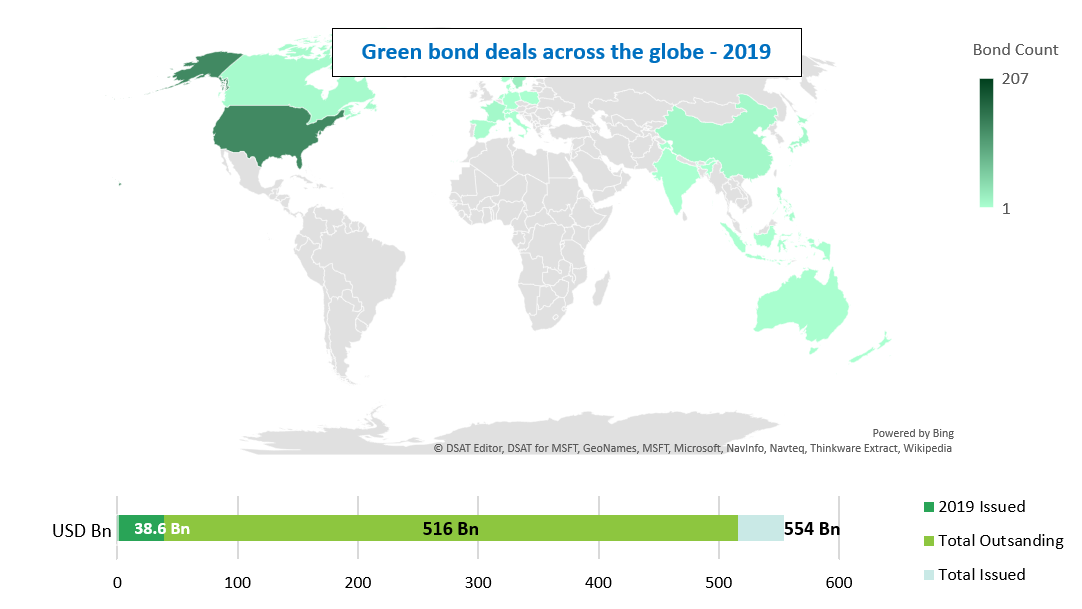 Non-financial corporates have been particularly active: nearly a third (30%) of February issuance accounts from them. Telecommunications firms Telefónica (Spain) and Verizon (USA), along with Finnish debut forestry sector issuer Stora Enso made up nearly two-thirds (63%) of non-financial corporate issuance.

On the financial corporate (bank) side, repeat issuer BNP Paribas boosted the numbers with a EUR750m bond. First-time entrant from Finland, OP Corporate Bank, contributed with an inaugural EUR500m transaction. The two banks accounted for nearly half (48%) of the month’s financial corporate volumes.

Sovereigns comprised the next largest issue type with 18% of February issuance. The drivers were Republic of France’s EUR1.7bn tap of its Green OAT and Indonesia’s second sovereign green sukuk (EUR750m).

By comparison, the prevalent issuer types for February 2018 were ABS (28%) followed by sovereigns at 19% while financial and non-financial corporate issuers, taken together, captured only 18% of the market.

In terms of geographical market share, USA climbed up to the top spot with 22%, spurred by Fannie Mae’s MBS issuance. France captured 19% of the market and came in second largely driven by the tap of the sovereign green bond. Canada took third place with a 17% share. Spain was the only other country whose issuance exceeded USD2bn, and this placed it fourth in the monthly rankings with a 14% market share. The like-for-like comparison for February 2018 shows USA at 36%, followed by Poland (18%), Canada (12%) and Germany (9%).

Issuance from developed markets (DM) constituted 90% of volume, up from 61% in 2018. February 2019 emerging markets (EM) issuance was spurred by the Republic of Indonesia’s second green sukuk, which represented over half of EM issuance, whereas, in February of 2018, Poland’s second green sovereign bond made up 92% of EM issuance.

FYI Properties (USD227.8m), USA, a financing vehicle of the National Development Council for Washington State IT facilities, issued 20-year US Muni green bond in the beginning of March. The proceeds refinanced a development in the Washington State Capitol Campus in Olympia. The project achieved a LEED Platinum rating and comprises the design, construction and furnishing of a six-story office block and associated wings, a large data centre and parking garage.

Climate Bonds view: The properties achieved a high-level of green building certification, which is an obvious plus. However, we strongly encourage issuers to set up clear tracking and reporting systems, as well as to seek external reviews in-line with market best practice.

Hitachi Capital Corporation (JPY10bn/USD89m), Japan, issued a 21-year project bond, which obtained a Green Bond Assessment (GA1) from R&I Japan. Proceeds will be used for new investments related to the construction of a solar power generation facility in Fukushima, Japan.

The Green Bond Assessment (GA1) provided by R&I discloses clear and detailed characteristics of the financed projects - such as a number of panels, annual power generation and number of LED lamps – as well as some expected impact metrics, including annual CO2 emission reductions. The company is also committed to reporting on key metrics related to use-of-proceeds and impact annually through its website.

Climate Bonds view: The company is a welcome addition to Japan’s pool of green bond issuers. The granularity of information presented in the Green Bond Assessment demonstrates the issuer’s commitment to comply with best practice disclosure.

Climate Bonds view: The benchmark issuance from LeasePlan is an encouraging development, as it indicates a commitment from the automotive industry to address climate change. The benefits in LeasePlan’s case extend to their sharing economy-focused business model. In-line with best practice, the firm has also obtained an external review and expressed its commitment towards post-issuance reporting, including impact metrics.

In its annual Green Bond Report, the issuer will include the amount of net proceeds allocated to each eligible sector, a description of the types of businesses and projects financed, the origination timeframe and maturity profile of the loans by sector, as well as the balance of any unallocated proceeds. Indicative environmental performance indicators have been listed in the framework.

Climate Bonds view: To date, there has been limited green bond issuance from Finland despite a healthy demand for Nordic green debt, as evidenced by the participation of more than 100 investors in OP’s debut GB. As one of the largest corporate lenders in the country, OP has set a precedent for other Finnish banks.

OP’s green bond framework is robust and covers a broad set of sectors. The issuer’s commitment to detailed reporting (including several environmental impact indicators for each eligible sector) is a positive sign. We hope to see a similar level disclosure from other Nordic issuers going forward.

Oregon School District (USD45m), USA, issued a US Muni green bond with a 20-year tenor in early March. The District is currently designing a new elementary school to serve its growing student population. It will be the first “net zero” school constructed in the State of Wisconsin. The school will use a combination of building energy efficiency and on-site energy generation so that over a one-year period there is no net carbon released into the atmosphere to operate the building.

Climate Bonds view: The construction of the first net-zero carbon school in Wisconsin is a commendable effort, as is the issuer’s commitment to reporting on the use-of-proceeds and environmental indicators of the bond. Obtaining external reviews and verification to align with best practice in the market is encouraged.

Renewable Japan (JPY7.9bn/USD71m), Japan, a developer and operator of photovoltaic (PV) power plants, issued a 22-year green bond. Proceeds are expected to be allocated to the construction of a PV power plant in Noboribetsu City, on the Japanese island of Hokkaido. The status of the proceeds allocation and reduced CO2 emissions by project will be disclosed once a year in the issuer’s CSR report or company website.

Climate Bonds view: This is the 3rd Japanese issuer from the renewable energy sector to debut in the green bond market in 2019, taking this year’s pool of new entrants to five at USD318m. Don’t miss our recently published Japan green finance state of the market 2018 report for a detailed overview of the Japanese green bond market.

New issuers issued prior to January 2019

Climate Bonds view: This is the first green bond from China that use all proceeds for affordable housing with a certain green building certification. Despite the deal being a private placement, the issuer has disclosed details on the use-of-proceeds and expected climate impact. We hope to see more private placement deals with a similarly high-level of disclosure on the green credentials of the project(s).

We only include bonds with at least 95% proceeds dedicated to green projects that are aligned with the Climate Bonds Taxonomy in our green bond database. Although we support the Sustainable Development Goals (SDGs) overall and see many links between green bond finance and specific SDGs, in particular, SDGs 6, 7, 9, 11, 13 and 15, the proportion of proceeds allocated to social goals should be no more than 5% for inclusion in our database.

A French-led expert group published a draft treaty for a European Finance-Climate Pact. It would establish a green subsidiary for the European Investment Bank, which would provide concessional loans worth up to 2% of each EU Member State’s GDP to finance climate projects.

China has published its first nationally unified guidelines on green finance, the Green Industry Guidance Catalogue. The document outlines green definitions for six sectors and more than 200 project types that can be financed with green bonds. The Catalogue includes “clean coal”, which is not aligned with the Climate Bonds Taxonomy. People’s Bank of China (PBoC) is updating its Green Bond Endorsed Project Catalogue, which will be launched in the near future. PBoC is interested in harmonising its guidelines with international best practice.

According to a Bloomberg article, central banks such as the Federal Reserve maintain a cautious attitude to climate change, viewing it as an operational rather than systemic risk.

Zurich Insurance Group collaborated with BlackRock to develop an impact measurement framework that enables aggregating key environmental and social impact metrics across asset classes. The framework will be released for public use to catalyse further development of impact measurement standards and metrics.

Oil company Shell set its first ever short-term emission reduction targets, pledging to reduce its net carbon footprint by 2-3% by 2022 compared to 2016. Top executive remuneration is tied to achieving the goal. Investors welcomed the development with expectations rising for other fossil fuel companies to follow suit.

A group of investors with a combined USD30tn (EUR26.6tn) in assets has demanded the steel industry update its practices in an attempt to slow man-made climate change, which risks increasing global temperatures to dangerous levels.

The Norwegian government announced plans to divest its USD1 trillion sovereign wealth fund. If passed, the legislative proposal would see the fund give up NOK70bn (USD8bn) worth of shares in 134 companies that are purely focused on fossil fuel exploration and production.

Swedish home appliance manufacturer Electrolux plans to embark on a green bond programme. Funds will be spent on reducing the environmental impacts of the company’s products and operations, including e.g. improved energy or water efficiency at factories as well as increased use of renewable energy. CICERO has provided a Second Party Opinion for the green bond framework.

Even if all carbon emissions were to be halted immediately, the Arctic region would still warm by more than 5°C by the century’s end, compared with the baseline average from 1986 to 2005, according to a new study from UN Environment. (summary article)

On a lighter note, another new UN study prepared by GRID-Arendal titled “Playing for the Planet, How Video Games Can Deliver for People and Environment” extracts six recommendations for the video game industry, gamers and policymakers to provoke new thinking, new collaborations, new games and real-world impact.

While 17% of current investment by large public corporations is already green, there’s an urgent need to mobilise even more capital to help build a lower-carbon and more sustainable economy, according to a report by Corporate Knights Research and the Climate Bonds Initiative. Global corporate green investment and the UN sustainable development goals look at how green bonds can help close the funding gap.

We had the opportunity to interview participants at the Climate Bonds Conference earlier this month.

Here are our first picks: