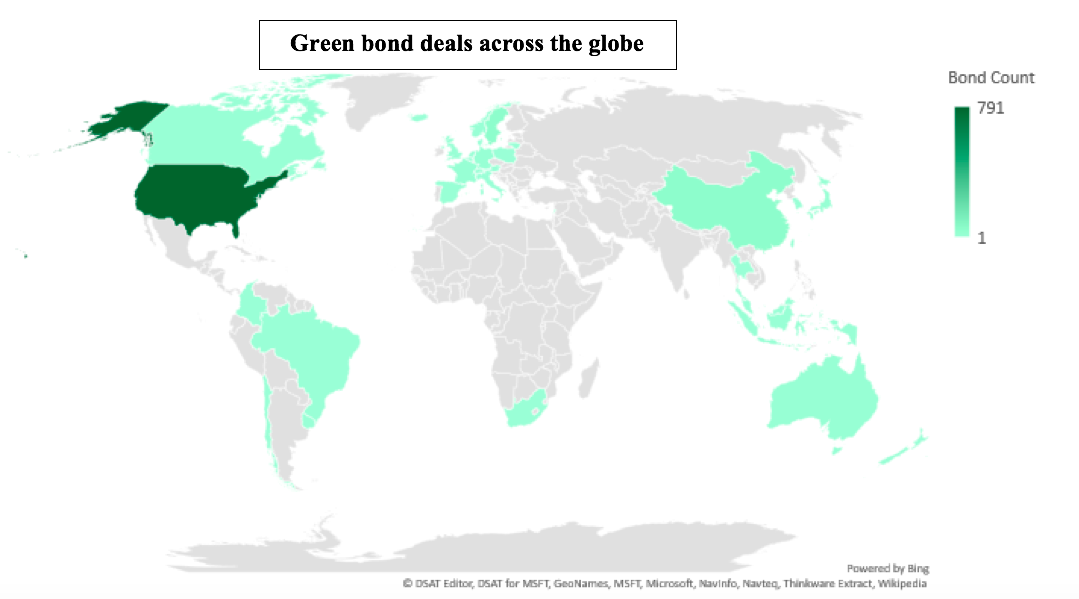 Go here to see the full list of new and repeat issuers in August.

The USD100bn annual benchmark was broken last year for the first time and announced at COP23 in late November.

As of 20 September, monthly green bond issuance totalled USD3.4bn. 38% of issuance came from corporates, with SSE’s EUR650m second green bond accounting for over a fifth of the volume.

While previous reports focused on identifying fully-aligned issuers that derive 95% or more of revenues from ‘green’ business lines, this year we expanded the scope to include strongly-aligned issuers that derive 75-95% of revenue from green business lines. Separate research was conducted on fully-aligned US Municipal agencies to identify their total outstanding unlabelled bonds. This figure is only included in the overall climate-aligned figure and not in the remainder of the report analysis. 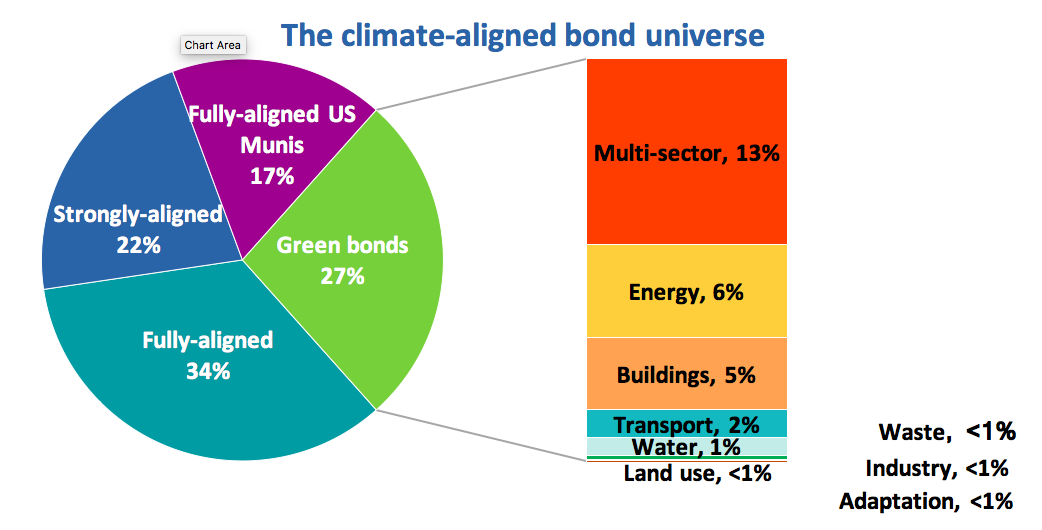 Encavis AG (EUR50m/USD58m), Germany, issued a 10-year green Schuldschein, which obtained a Pre-Issuance Certification under the Solar Criteria of the Climate Bonds Standard. This is the third Certified green Schuldschein to come to market following deals from Nordex and Volkswagen Immobilien in March 2016 and May 2018 respectively. Proceeds will primarily be allocated to finance the acquisition of solar parks from the partnerships with Solarcentury and Power Capital and Ireland Strategic Investment Fund (ISIF), with a total generation capacity of approximately 1.3GW in the next two years. As part of the same acquisition pipeline, in March 2018 Encavis AG took over a solar park with a 44MW generation capacity in the Netherlands. ISS-oekom provided the Pre-Issuance Verification Report.

Beijing Infrastructure Investment (CNY1bn/USD146m), China, issued a 3-year green bond, benefiting from a Zhongcai Green Financing Second Party Opinion (not publicly available). Proceeds will be fully allocated to the construction and operation of 7 different metro lines in the city of Beijing. The issuer has disclosed expected short term, medium term and long term climate and environmental impacts for each project.

Climate Bonds view: We are pleased to see Beijing Infrastructure Investment, a state-owned railway and infrastructure financing company, entering the green bond market to finance Beijing’s metro system. The issuer’s CNY10bn green bond programme has been approved by the regulator, so we are expecting to see more green bonds issued under the same framework.

Climate Bonds view: This is the first green loan from a Hong Kong issuer and first from the communications and printing sector. This raises Hong Kong’s 2018 issuance to date to USD823m.

Ricoh Leasing Company (JPY10bn/USD91m), Japan, issued a 5-year senior unsecured green bond, which obtained a Green 1 rating from the Japan Rating Agency. The deal will refinance 11 solar power generating facilities located in Japan through the repayment of previously issued Commercial Paper. The assets are expected have a total average power generation of 30,001MW and reduce emissions by 15,701t per annum.

Climate Bonds view: This is the first Japanese leasing company to enter the green bond market, taking the country’s total issuance for 2018 to USD803m. The replacement of short-term funding (commercial paper) with long-term financing (10-year green bond) is better aligned to the asset life and provides a useful example how refinancing in the green bond market can reposition financing: in this case, by extending the maturity profile.

Taishin International Bank (USD20m), Taiwan, issued a 30-year green bond in July 2018. The deal benefits from a Deloitte Assurance report (not publicly available). Bond proceeds will be fully allocated to a wide range of projects, including wind and solar farms, energy technology and industrial efficiency improvements, smart grids, green buildings, greenhouse gas reduction, waste reuse and recycling, as well as other projects that are permissible under the Taipei Exchange’s green bond catalogue, such as water efficiency, treatment and recycling.

Climate Bonds view: We excluded this bond in July due to the potential use of proceeds in controversial projects. However, the issuer has confirmed that the bond is not going to finance any projects related to clean coal or fossil fuels, which were mistakenly put into the prospectus. Accordingly, we have moved this bond to our included green bond list. Taishin International Bank has also renewed the prospectus on Taiwan’s designated information disclosure platform-Market Observation Post System (MOPS).

Urumqi City Construction Investment (group) Co., Ltd. (CNY1.5bn/USD220m), China, issued a 5-year green private placement in August 2018. The deal has limited disclosure. However, a summary of the use of proceeds published on the Wind Financial Terminal indicates that that bond is going to finance 12 projects. 11 are dedicated to bus systems in Urumqi city, including bus lane construction, bus stations/terminals, a bus signalling system, BRT, and bus parking. The other project is expected to improve the comprehensive environmental management in a natural park.

Climate Bonds view: Although the bus lane and dedicated bus parking stations don’t provide climate benefits directly, they act as essential infrastructure to support bus operations. Especially for this deal, these assets are an integral part of the overall bus projects. Therefore, we included this bond in our database and will update any new information once it’s made available.

For energy efficiency in buildings, the target is to decrease the energy use per year by 25% with respect to the benchmark required by Swedish codes and regulations, or to obtain certification from one of the following schemes: LEED (minimum Gold), BREEAM (minimum ‘Very Good’), or Miljöbyggnad (minimum Silver), Svanen, EU Green Building and Fedy-12 (Mini-energy building).

Climate Bonds view: Car pool services using fossil-fuel based vehicles are not automatically aligned to the Climate Bonds Taxonomy and are usually considered on a case-by-case basis according to whether they meet the universal gCO2/p-km (passenger per kilometre) threshold (p12 of Low Carbon Transport Criteria). Given Willhelm AB is a real estate company and car pools are just a subset of one of three eligible categories, we decided to include the bond with the assumption that less than 5% of proceeds will be allocated to this project type. However, we will closely monitor the bond’s proceed allocation and impact reporting to ensure that either the vehicles meet the universal threshold (75gCO2/p-km in this case) or that only a maximum of 5% of proceeds have been allocated to finance this project type.

Greenalia Biomass Power Curtis Teixeiro (EUR125m/USD145m), Spain, issued a green loan in July 2017. S&P Global Ratings awarded the deal an E1/77 Green Evaluation. Proceeds will be allocated to the construction of a biomass plant in the town of Teixeiro (Province of La Coruña, Spain). The plant will have the capacity of approximately 50MW and is expected to generate 324GWh per year from forest waste collected within a 100km radius of the new installation.

According to the issuer, this project will be beneficial for the maintenance of forests in the area and the prevention of fires, while encouraging the collection of small-sized waste that is normally discarded for industrial use. The biomass used by the plant will be FSC or PEFC certified. The issuer has committed to disclosing sulphur dioxide (SO2), nitrogen oxides (NOx), and carbon monoxide (CO), among other metrics, once the plant becomes operational. S&P Global Ratings notes that the deal lacks a clear project selection process based on calculations of expected environmental impacts.

Climate Bonds view: This is the second** Spanish issuer to finance a biomass project through a green loan. It’s good to see the issuer committing to reporting the environmental impacts of the project. We agree with S&P Global Ratings that providing a project selection criteria would enhance the deal’s transparency.

We only include bonds with at least 95% proceeds dedicated to green projects that are aligned with the Climate Bonds Taxonomy in our green bond database. Though we support the Sustainable Development Goals (SDG) overall and see many links between green bond finance and specific SDGs, the proportion of proceeds allocated to social goals needs to be no more than 5% for inclusion in our database.

The Global Green Bond Partnership (GGBP) was launched on Thursday at the Global Climate Action Summit and aims to support efforts of sub-national entities such as cities, states, and regions, corporations and private companies, and financial institutions to accelerate the issuance of green bonds.

Veolia, a waste management company, plans to include two fully-electric bin lorries in its vehicle fleet. The lorries will be charged with power derived from waste collected by the company.

Luxembourg Green Exchange and Mexico City are the latest signatories to the Green Bond Pledge. Local Government Super (LGS), the industry pension fund for NSW local government employees, also joined the US state treasuries' of California, New Mexico and Rhode Island and the cities of Asheville, San Francisco and King County as founding signatories to the Green Bond Pledge.

Eleven companies - including Tesco, Sky and Siemens - have pledged to power their London-premises with 100 per cent renewable energy, as Sadiq Khan announces the first London Climate Action Week.

Ireland published a Green Bond Framework for Irish sovereign green bonds and Sustainalytics provided the Second Party Opinion. The roadshow for the first sovereign is planned for coming weeks.

The Canadian Imperial Bank of Commerce (CIBC) developed a CIBC Women in Leadership Bond Framework which benefits from a Sustainalytics Second Party Opinion.

EIB’s report Financing innovation in clean and sustainable mobility finds that green mobility in Europe has an annual financing gap of between EUR5.5bn and EUR13bn.

Corporate Knights in Canada have just released a new report detailing the benefits of investing in low carbon and sustainable companies. It’s all in Capitalizing on Sustainable Finance: A growth opportunity for Toronto’s financial sector.

Watch how cities around the world are using plastic bottles as a means of payment for public transport.

Take 1:24mins to discover how Dutch neighbourhoods are producing power from renewable energy.

Watch how China is ramping up its renewable energy capacity.

A quick report from Justine Leigh-Bell, our Director of Market Development, on last week's GCAS in San Francisco. 0:52 secs.

**Editor's Note: The original post listed Greenalia Biomass Power Curtis Teixeiro as the first Spanish issuer to finance a biomass project through a green loan. This is incorrect. The first was Ence Energia. They (Greenalia) are the second.

{}The original post included Iren as a repeat issuer. Upon further analysis they have now been reclassified as excluded due to more than 50% of bond proceeds allocated to natural gas cogeneration. The repeat issuer list and monthly figures have been adjusted to reflect this change.

Apologies for any inconvenience this may have caused.