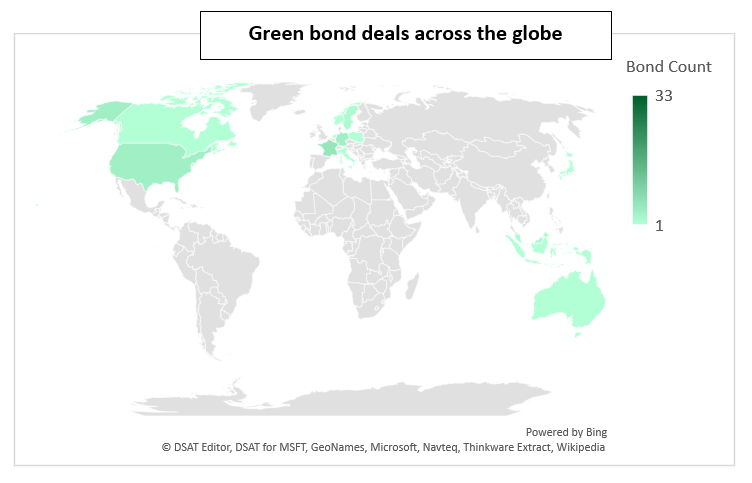 February started off slowly and monthly green bond issuance totalled only USD4.4bn, 44% lower than January and 37% below February 2017’s total. Some big deals announced towards month’s end and to settle in early March, put the trend back on track to achieving, and possibly exceeding, last year’s equivalent monthly figures.

February also saw three new issuers, which is fantastic, but repeat issuers accounted for 95% of the month’s volume with development banks EIB and KfW contributing 22%. Renewable energy and Low Carbon Buildings are still the most prominent use of proceed sectors, accounting for 56% and 43% of issuance respectively.

The march of the Sovereigns continues.  Poland’s repeat sovereign issuance represents 29% of the February's green bond volume. Indonesia and Belgium’s sovereign green bonds add up to USD6.5bn, or the equivalent of 50% of March 2017’s total issuance. Hong Kong’s ambition to become Asia's green finance hub were boosted by their budget announcement of the world’s biggest sovereign green bond program.

Lastly, the Climate Bonds Conference, Europe’s largest single green bond event kicks off in less than two weeks. Will you be joining us? And don’t forget the coveted Green Bond Pioneer Awards, now in their 3rd big year.

>See the full list of new and repeat issuers here.

Pennsylvannia's Ligonier Valley School District (USD10m), issued a 15-year bond, the first green muni from the state. The USD10m Series A (Green Bond) is part of a USD13.8m deal which will finance the School District’s initiatives under its Energy Efficiency Project, according to the prospectus. Of the USD16.7m of identified improvements, USD13.6m have associated quantifiable energy consumption benefits, according to Moody’s. The projects are largely consistent with the energy efficiency and sustainable water and wastewater management categories of the GBP, but given that not all project components have a quantifiable positive benefit, the district elected to take a conservative approach and only label USD10m as green bonds. The green bond was awarded a GB1 rating by Moody’s.

To calculate the expected energy consumption savings, LVSD’s partner Constellation Energy Group generated a consumption baseline through a review of the district's current utility bills, and then compared expected energy generation to the baseline. Beginning in March 2021, 12 months after expected project completion, Constellation will start issuing annual reports with the actual energy and financial savings by project component.

Climate Bonds view: Well done to the Keystone State in its green muni debut. The multi-tranche deal structure provides a template for issuers who may wish to finance a variety of projects, but not all would qualify for a green label. We also view positively the promise to report annually on actual energy and financial savings relative to an established consumption baseline. We’re looking to USD20bn from the US green muni sector this year, this bond is a small but welcome start.

Foncière Inéa (EUR100m/USD123m), a French real estate company, issued a green private placement bond, a first from a mid-sized French issuer. Proceeds will be allocated to the acquisition of certified commercial buildings close to public transport. The deal benefits from an SPO from Vigeo Eiris (not publicly available).

Climate Bonds view: Having reviewed the eligibility criteria outlined under the green bond framework (not publicly available), we are satisfied that the placement is in line with the Climate Bonds Taxonomy and the building certification level is aligned with the higher end of industry practice.

Indonesia’s TLFF I Pte Ltd (USD95m), a financing vehicle for the Tropical Landscapes Finance Facility, issued a 15-year multi-tranche sustainability bond deal, as part of a USD350m project. The TLFF project is a JV between France’s Michelin and Indonesia’s Barito Pacific Group. Proceeds will finance a sustainable rubber plantation on heavily degraded land in the Jambi and East Kalimantan provinces of Indonesia. The plantation will cover 34,000ha out of 88,000ha, while the remaining land will be used for conservation, aquaculture, land restoration and smallholder plantations, including bamboo, cocoa, coconut, coffee, palm and rubber. The deal benefits from a USAID guarantee and the issuer obtained a Vigeo Eiris second party opinion.

Climate Bonds view: There are social components to this issue, but the sustainable agriculture basis combined with conservation of nature corridors for endangered species and the planned restoration of degraded land fit in with the Nature Based Assets category of the Climate Bonds Taxonomy.  Sustainable land use appears to be the prevalent use of proceeds and we would hope to see this confirmed in future reports.

Kingdom of Belgium (EUR4.5bn/USD5.5bn) closed a 15-year Green government bond (OLO) on 5th March. This is the country’s first green OLO and the second largest sovereign green bond issued to date after the French Green OAT bond in January 2017. The proceeds will finance primarily clean transport (85%) with EUR2.2bn to be invested in domestic passenger trains for the benefit of SNCB and railway projects, according to the Belgian Debt Office.

Eligible categories under the Green OLO Framework also include living resources and land use, renewable energy, circular economy and energy efficiency, as well as related federal state expenditures that can contribute to meeting Belgium’s climate policy objectives. In its SPO, Sustainalytics recognises the importance of government incentives in driving emission reductions in the public and private sectors, especially through energy efficiency improvements, and expresses a positive view regarding such expenditures.

Climate Bonds view: We agree with Sustainalytics’ view that it makes sense to fund supportive government incentives and would hope to see evidence of their impact on GHG reductions in future reporting. For energy efficiency renovations in buildings, we note that communicating threshold levels in the framework would contribute to its transparency and clarity, albeit this is not so crucial for now given the focus on transport.

Republic of Indonesia (SGD1.65bn/USD1.25bn) closed a 5-year green sovereign sukuk on 1 March. This is the first Asian sovereign green bond and the second Indonesian green bond. Proceeds can finance eligible projects under a wide range of categories, according to the green bond framework.

In the second party opinion CICERO identifies concerns on several fronts regarding eligible projects. For instance, CICERO awarded the Green Buildings category a “Light Green”, stating that the type of building certification does not ensure energy efficiency improvements since “it is possible to achieve a Bronze or a Silver Greenship certificate with no energy efficiency credits.” For Sustainable Management of Natural Resources, CICERO expressed concerns that some projects may involve deforestation, assessing this category as a “Light to Dark Green”.

Climate Bonds view: We agree with CICERO that there are potential concerns and would like to see more clarity and transparency around all investment projects in future reporting. Now that the bond has been issued, ministries and agencies can apply for funding, so it remains to be seen which projects will be shortlisted and approved. We would also like to find out what share of proceeds are ultimately allocated to projects that do not align with the Climate Bonds Taxonomy – such as social programs (e.g. public health management, food security), rerouting roads, green tourism and R&D investments.

>See the full list of new and repeat issuers here.

If issuers do not provide sufficient information on the use of proceeds, the bonds are tagged as “pending”. If and when satisfactory additional information becomes available, we may include them in our database.

Climate Bonds view: The bond was placed on Climate Bonds’ Pending list at issue while we obtained further information on Norwegian hydro power plants. Based on information provided by CICERO, we have concluded that the deal meets our inclusion criteria.

Östersund Municipality (SEK800m/USD96m), Sweden, issued a 5-year green bond in November 2017. Proceeds will be allocated to projects of municipality owned companies Östersundhem AB and Jämtkraft. In its SPO CICERO notes that the issuer expects proceeds to fund primarily renewable energy and energy efficiency in buildings, although the framework covers a wide  range of categories. The criteria for eligible building projects cover (a) FEBY, a Swedish Passive House standard, Svanen, the Nordic Swan Ecolabel awarded to energy-efficient small houses, flats and pre-school buildings, and Miljöbyggnad Silver as well as (b) major renovations which lead to a reduced energy use of at least a 35% per m2Atemp per year.

Climate Bonds view: This is another bond from the booming Nordic public sector, the subject of a recent Climate Bonds report. The bond was placed on Climate Bonds’ Pending list at issue while we considered possible investment in hydro power plants and the production of hydrogen from electrolysis or other residual flows. We have now concluded that the deal meets our inclusion criteria. We further note positively the promotion of a passive house standard and the minimum 35% energy use reduction required for refurbishments.

We only include bonds with at least 95% proceeds dedicated to green projects that are aligned with the Climate Bonds taxonomy in our green bond database. Though we support the Sustainable Development Goals overall and see many links between green bond finance and achieving specific SDGs, the proportion of proceeds allocated to social goals needs to be no more than 5% for inclusion in our database. Nonetheless, well done to ANZ & the other issuers looking to address SDG based finance.We'll have more to say on the links between green bonds and SDGs soon.

Trends of the month 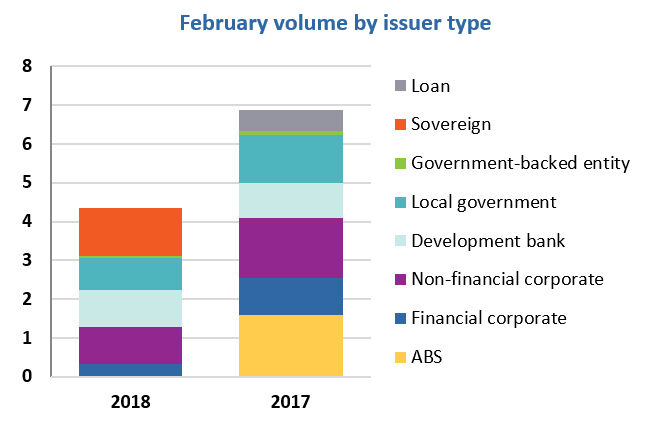 Generali Group, the largest Italian insurance company, announced it will divest from coal companies and increase green investments by EUR3.5bn by 2020.

Spanish bank BBVA recently pledged to direct EUR100bn to finance green and sustainable projects by 2025, including through the potential issuance of sustainability bonds.

The Green Climate Fund has committed to direct an additional USD1.09bn towards mitigation and adaptation projects in developing countries.

The Belgian Debt Agency announced that the newly issued green OLO is expected to grow to USD10bn by 2022 through subsequent taps.

Moroccan Al Omrane group recently announced their plan to issue green bonds amounting to up to 1 billion dirhams (USD272m). Issuance of the bonds is expected to start in July.

During the announcement of Hong Kong’s Fiscal Budget 2018-2019, Financial Secretary Paul Chan Mo-po proposed the launch of a green bond programme with a ceiling of HKD100bn (USD12.8bn). The government also announced the introduction of a Green Bond Grant Scheme to subsidise issuers that qualify under the Green Finance Certification Scheme, recently launched by the Hong Kong Quality Assurance Agency.

CBI recently released the “Green Bond Pricing in the Primary Market”  report, which analyses the performance of green bonds issued in Q3 2017.

In case you missed it, our latest Quarterly Newsletter covers the expansion of our Standards program to cover new sectors eligible for green bond certification through 2018.

Look for some big announcements over the next month.

Take only 0:45secs to hear our CEO Sean Kidney talk to EFNTV on how Sweden is at the forefront of sustainability.

For your weekend viewing, watch an up close 36:50secs of Sean Kidney speaking in depth on Financing Solar PV with Debt Capital from the recent Making Solar Bankable conference in Amsterdam.

And don’t miss our 60sec Super Trends for 2018 from early January. We’re pleased to see some of them coming to fruition already.