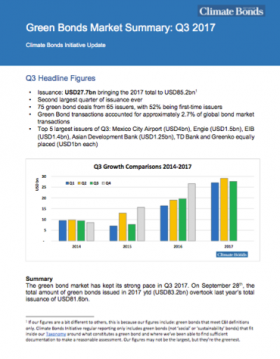 Mexico was a surprising addition to the number one spot, after issuing no green bonds in Q1 or Q2 2017.

24% of new issuers were from China and 18% from the U.S. Firsts from both Malaysia (Tadau Energy) and Lithuania (Lietuvos Energija) further expanded the geographic diversity of the market.

The table shows Citi, HSBC and JP Morgan taking top spots for Q3 with JP Morgan the biggest mover from the combined Q1/Q2 table.  In amongst the other familiar faces, Canadian based TD Securities and RBC Capital Markets debut and National Australia Bank makes an appearance in the No15 position.

The League table data is produced via a collaboration between Climate Bonds and Thomson Reuters. Information on Thomson Reuters methodology and data is set out at the conclusion of the report.