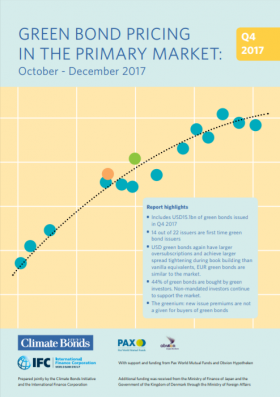 Climate Bonds Initiative has released the fourth “Green Bond Pricing in the Primary Market” report analysing the performance of green bonds issued in the period October-December 2017. This is the last quarterly report; future publications will be produced semi-annually.

The report is a continuation of our ongoing assessment of green bonds pricing.  A preliminary Snapshot briefing paper examining Q4 of 2016 was produced for the 2017 Climate Bonds Annual Conference.