October at a glance

Climate Bonds estimate for 2019 annual issuance is between USD230bn to 250bn.

The monthly year-on-year growth was mainly driven by a much larger volume coming from EM: USD5.2bn this year compared to USD1bn in October 2018. Chinese issuers accounted for USD3.4bn and the market saw green bonds from nine EM countries compared to six in October 2018. Large deals came from UAE (USD600m) and India (USD452.5m).

Developed markets accounted for two thirds (69.1%) of October issuance, fuelled by deals from the USA (USD2.7bn), France (USD2.4bn) and Ireland (USD2.2bn). There were transactions from Luxembourg (USD1.2bn), Austria (USD52m) and Finland (USD22m), countries that don’t often appear in monthly country rankings. Monthly volumes from German and UK issuers were much lower than October 2018, down 82% and 59% respectively.

Note: Green MBS issuance from Fannie Mae has not been included in October figures yet.

18 deals came from Non-Financial Corporates from a variety of countries and variety of sizes with a total of USD4.9bn. 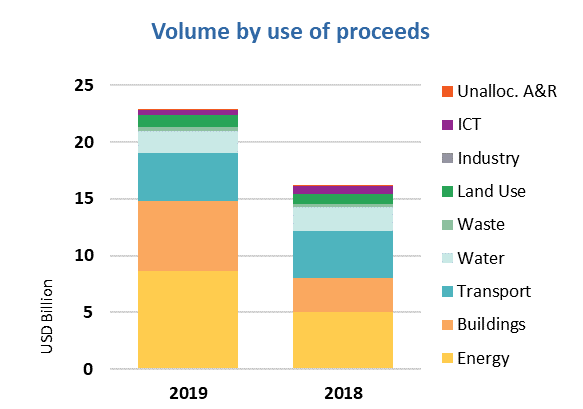 Funds raised in October were allocated mainly to Energy through 41 deals (out of a monthly total of 71). In 17, the proceeds financed only renewable energy. The largest deals came from Banco Santander (EUR1bn/USD1.1bn), Rabobank (EUR750m/USD832m) and MidAmerican Energy (USD600m).

Buildings allocations more than doubled, rising from USD3bn in October 2018 to USD6.2bn. Notably, Fannie Mae issuance for October 2019 has not been included yet, so the final growth figure is expected to be even higher.

Other sector allocations were similar compared to October 2018.

Terna Energy Finance (EUR150m/USD167m), Greece, issued its inaugural 7-year green bond. It is Certified against the Wind Criteria of the Climate Bonds Standard and is the first green bond from a Greek issuer. It is also the first Certification linked to wind farms in the US: the proceeds will be used to finance (60%) and refinance (40%) the development of 14 sites across Greece and 1 in the US.

Allocation reporting will be available to investors within one year after bond issuance. The issuer intends for all the proceeds to be allocated within this first year. There will also be quantitative details on the wind projects in the annual publicly available in Corporate & Social Responsibility (CSR) reports.

Sparebanken Sør Boligkreditt (EUR500m/USD555m), Norway, came to the market with a 7-year covered bond, Certified against the Low Carbon Buildings Criteria of the Climate Bonds Standard. The proceeds will finance and refinance mortgages on residential buildings in Norway, which comply with certain Norwegian building codes and labels.

Greene Township Municipal Authority Franklin County, Pennsylvania (USD20m), USA, joined the green bond market with a 13.1-year US Muni. This deal will refinance outstanding sewer revenue bonds and is assured by BAM GreenStar. There is no reporting commitment stated.

Climate Bonds view: This is the fifth bond issued by a Municipality from the Keystone State and the first to obtain BAM GreenStar assurance. We do encourage reporting and transparency on proceeds allocation.

AEON REIT Investment Corp (JPY3.3bn/USD30.4m), Japan, took out a 3-year term loan that was rated Green 1 by Japan Credit Rating Agency (JCR). The proceeds will go towards investments in buildings that have acquired or will acquire environmental certifications within the top three categories of regional, national or international certification levels. Funds could also be allocated towards renovations aimed at improving environmental aspects such as energy efficiency and water consumption.

There will be a detailed allocation report with information such as the status of funds for Green Finance. Certification levels will be disclosed annually as well as total energy consumption and GHG emissions of the properties.

Climate Bonds view: Another Japanese REIT joining the market benefiting from an SPO. It is good to see ambitious certification targets for the buildings that are being financed.

ASE Industrial Holding Company (USD300m), China, issued its first green bond maturing in 3 years’ time. The proceeds will primarily finance three projects in Gaoxiong, of which two are building projects and one is a water-related project. The buildings projects target energy efficiency improvements, and one of them is designed with the intention to apply for the EEWH green building label. There is no reporting commitment stated and no third-party review.

Climate Bonds view: We are pleased to see that ASE Technology Holding provides information about the project they are financing and the relevant environmental impacts such as the amount of carbon emission reductions. We encourage ASE to continue to disclose this type of information post-issuance.

CPI Property Group will publish an allocation report annually on their website until proceeds are fully allocated. This will include the allocation of the net proceeds as well as information such as eligible projects financed, unallocated proceeds, remaining balance and buildings’ status. There will also be an impact report where feasible with different metrics for each category such as level of certification by property or annual GHG emissions reduced/avoided.

Climate Bonds view: As the fourth issuer from Luxembourg coming to the market, this is the largest bond issued so far by a Luxembourg company and the first to indicate intentions to finance projects in the land use space. We do encourage issuers to obtain an external review.

Cubico Sustainable Investments (EUR173m/USD193m), UK, had its inaugural issuance with a project finance bond that will refinance three wind projects: a 99 MW portfolio located in Campania, Apulia and Basilicata. No external review was obtained nor any commitment to disclosure after issuance was stated.

Climate Bonds view: Large sector-focused investment groups are able to direct significant amounts of finance towards climate-friendly projects. As a renewable energy developer, most – if not all – of Cubico’s projects would be eligible to be funded by green bonds and/or loans, so we hope it will choose to pursue more labelled instruments.

Guangdong Electric Power Development Company (CNY200m/USD28m), China, had its debut issuance with a 3-year green bond. The proceeds are intended to go towards raising funds for green project construction, supplemented green project supporting working capital and repaying green project loans amongst others. There is no third-party review and reporting commitment stated.

Climate Bonds view: The issuer mainly generates capital for solar projects. We are pleased to see the issuer will furnish an independent post-issuance report each year from Lianhe Equator Environmental Impact Assessment Co., Ltd. However, we would like to see more detailed information on the proposed projects. We also hope that the issuer will disclose the use of proceeds information each year after issuance and put in place a comprehensive reporting system.

Mapletree Commercial Trust Management (SGD670/USD491m), Singapore, took out its first green loan that will partially finance the REIT’s acquisition of Mapletree Business City. This is a project that was designed with environmentally friendly features and has been certified BCA Green Mark Platinum, BCA Universal Design Mark Platinum Award and LEED Gold. There is no third-party review and no reporting commitment stated.

Climate Bonds view: It’s encouraging to see the first Singaporean REIT joining the Green Bond market. So far, the REIT green bond market is dominated by Japanese issuers. We hope issuers from other countries will be encouraged to follow.

Metrolinx plans to complete a one-time post in-service business case for Hurontario LRT, to include an analysis of GHG emissions – approximately three years after completion of construction.

Climate Bonds view: Investments in mass public transport, especially in urban environments, are urgently needed. We are pleased to see another Canadian public authority backing such a project via a long-term concession, following past issuances by the Province of Ontario itself (a small portion of which actually financed this project) and several other public transport investments in other Canadian cities. As a PPP, this is also an example of a multi-stakeholder approach, showing how private entities can be leveraged to deliver projects of a public good nature.

Visit our Bond Library for more details on October deals. 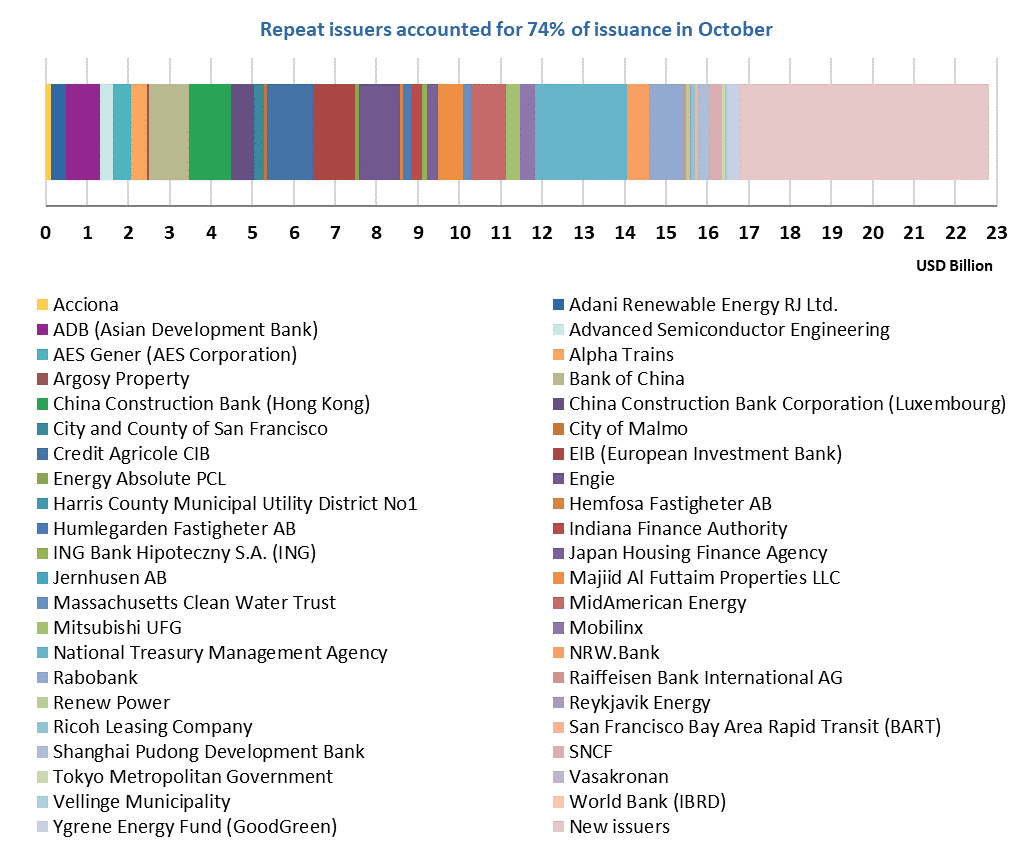 The Inter-American Development Bank and the Government of the UK have announced a partnership which aims to support growth and transparency in the green bond markets in the Latin American and Caribbean region. This will be done through a platform that will contain information such as detailed description of use of proceeds of the bonds.

The FCA has published a statement prioritising a number of issues regarding their work on climate change and green finance such as new rules to improve climate-related disclosures.

Mark Carney, Governor of the Bank of England, has repeatedly stressed the responsibility of the financial sector to consider climate change as a risk factor to their business.

Bloomberg reports that firms are setting up mutual funds that mimic hedge fund practices such as shorting firms that do not shift to sustainability.

New South Wales Treasury Corporation has announced it is planning to issue a bond that will finance a mix of green and social assets.

Japanese utility company Tepco is considering issuing  a green bond. It established a new unit called Tepco Renewable Power that will take over the renewable energy business through which the funds will be raised.

The Climate Friendly Materials Platform, which brings together leading researchers and policy advisors from across Europe, convened by the research network Climate Strategies, published a report which suggests five policy instruments that could create economic incentives for private actors and industry to pursue transformative investments aligned with Europe’s climate-neutral objectives for 2050.

Norton Rose Fulbright illustrates the use of transition bonds, green bonds, and sustainability-linked financing in agribusiness and portrays multiple case studies on this topic.

A report by the Rocky Mountain Institute states that the global energy transition can be accelerated due to advancements in battery technology. This is fuelled by improvement of cost and performance of batteries, growing demand for electric vehicles as well as increased renewable energy generation.

The Climate Risk and Green Finance Regulatory Forum. London, 19 November. The Forum will examine how the Green Finance Strategy is going to be implemented by the UK Government and financial regulators. It will clarify the practical steps that financial institutions need to be taking now in order to ensure that they are prepared and fully compliant. It will also examine the new opportunities that this seismic shift in finance will offer. Climate Bonds Initiative is supporting this event – Please use code “CRF1CBI” at the checkout to receive 30% off the standard registration fees.