The giant ten-year multi-stage EUR35bn infrastructure project will see SGP use a combination of tax and borrowing via an ongoing series of Climate Bonds Certified green bonds.

The project is emblematic of the large-scale low carbon transport development needed in the urban concentrations of today and the megacities of tomorrow, particularly in emerging economies.

SGP has adopted the Climate Bonds Programmatic Certification; designed for large and repeat issuers. The first certified bond to date is a whopping EUR1.75bn (USD2.01BN), issued in October 2018 for a tenor of 10yrs.

A second, smaller certified bond is already in the pipeline as part of the Programmatic process.

Climate Bonds Initiative awarded Pre-Issuance Certification for this series of bonds under the Low Carbon Transport Criteria in October 2018.

Green Bonds- A Bridge to SDGs

In an increasing trend amongst green issuers, the green bond framework released by SGP has also identified the project as contributing to SDG goals 8,9,11,12,13,15. 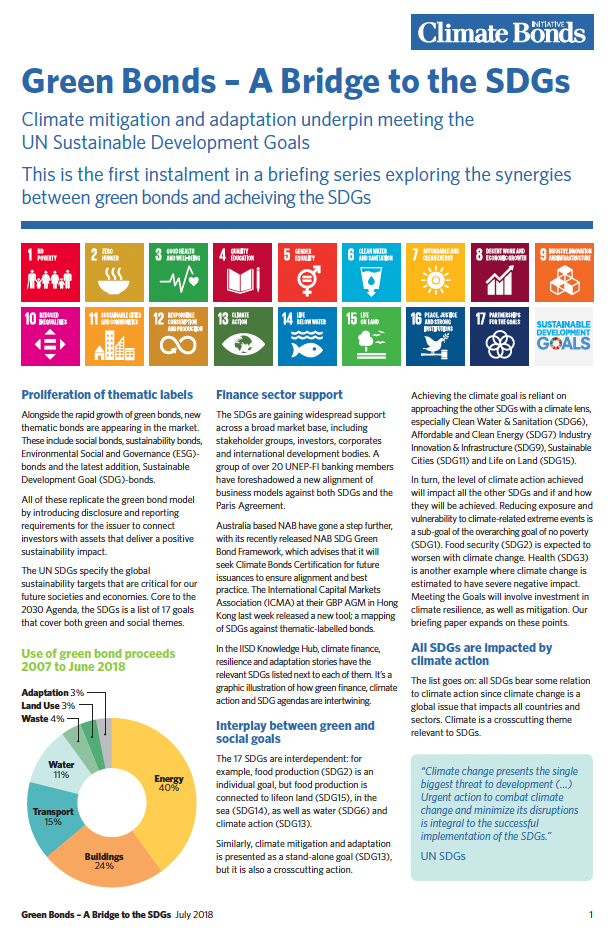 Climate Bonds analysis from June has identified the SDGs that will benefit the most from increased green bonds issuance.

SGP’s urban transport programe is a prime example of green bonds being a bridge to Sustainable Development Goal outcomes.

More green bond issuance, particularly from emerging economies in Asia, Africa and LATAM has a positive impact on SDG objectives and the 2030 Agenda.

Whilst all SDGs need to be seen through a climate lens we see the strongest links against the targets and indicators for Clean Water & Sanitation (SDG6), Affordable and Clean Energy (SDG7) Industry Innovation & Infrastructure (SDG9), Sustainable Cities (SDG11) Climate Action (SDG13) and Life on Land (SDG15).

Our special June 2018 SDG Briefing Paper has more on this increasingly critical connection between green finance and sustainable development.

What is Programmatic Certification?

Programmatic Certification (PC) is a streamlined process for Issuers who plan to issue multiple green bonds over an extended period, against a large portfolio of eligible assets and projects.

PC shares the same rigor as the basic Climate Bonds Certification process under the Climate Bonds Standard and provides the same assurance, however it frontloads some of the procedures so that they are done only once in the beginning of the overall bond issuance programme.

This simplifies the process for the issuer but maintains the existing integrity of Certification under the Climate Bonds Standard and associated assurance for investors. 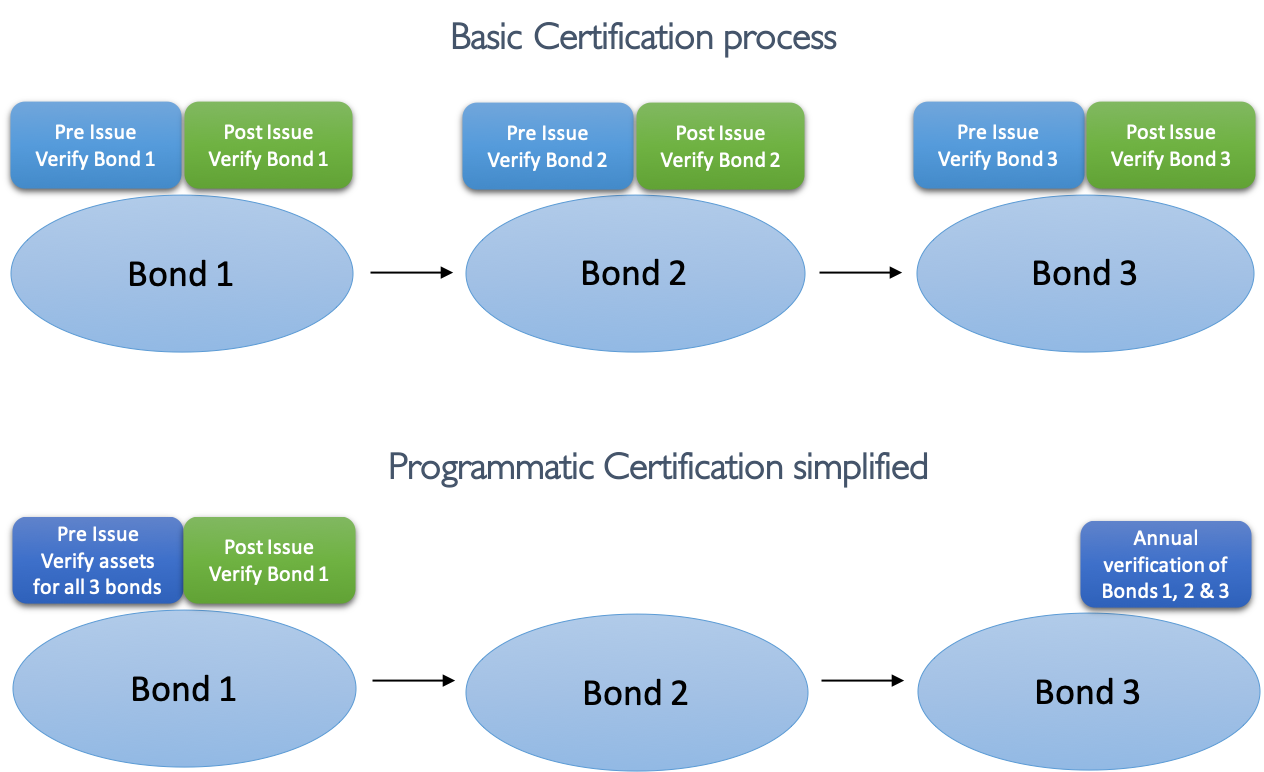 The Programmatic process was launched in January 2017 as part of the Standard V2.1 upgrade to our umbrella standard.

In the intervening 20 months, 10 major Issuers have moved across to the new Certification process. 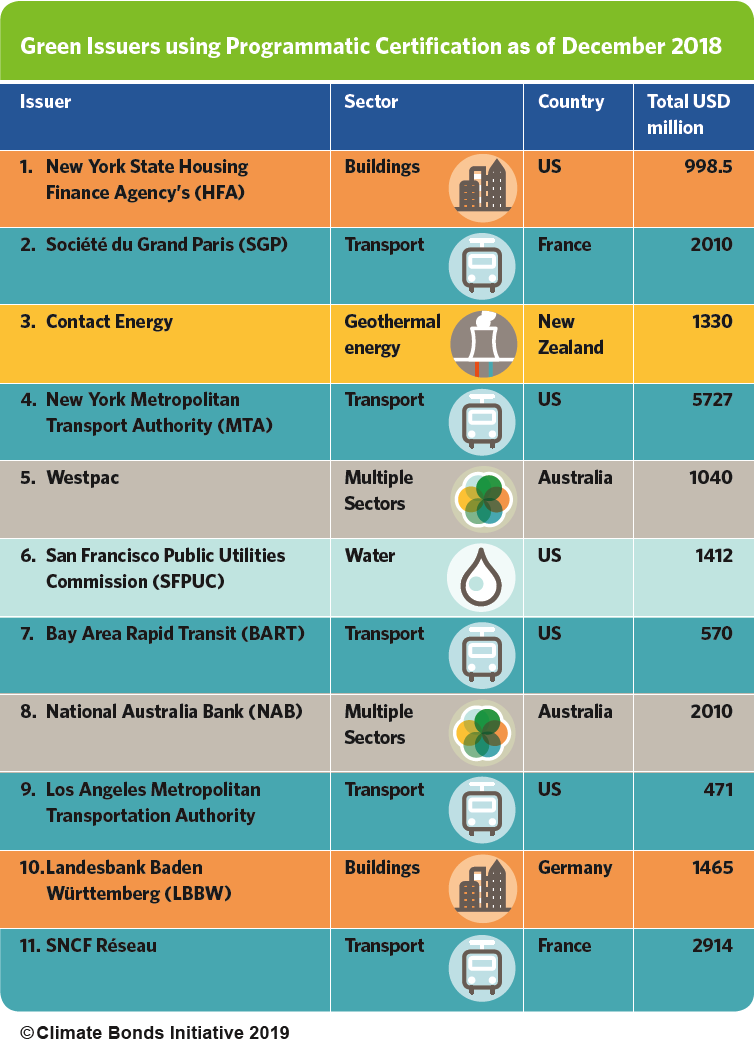 Multiple issuers with existing debt programmes and asset pools looking for a process to support an ongoing series of green bonds.

In SGP’s case, their Programmatic Green Bond Programme may match the decade+ life of the giant Paris project.

Is Programmatic for You?

To find out more, visit our Programmatic Certification page, download the Powerpoint Guide and the FAQs pdf from the bottom of the page.