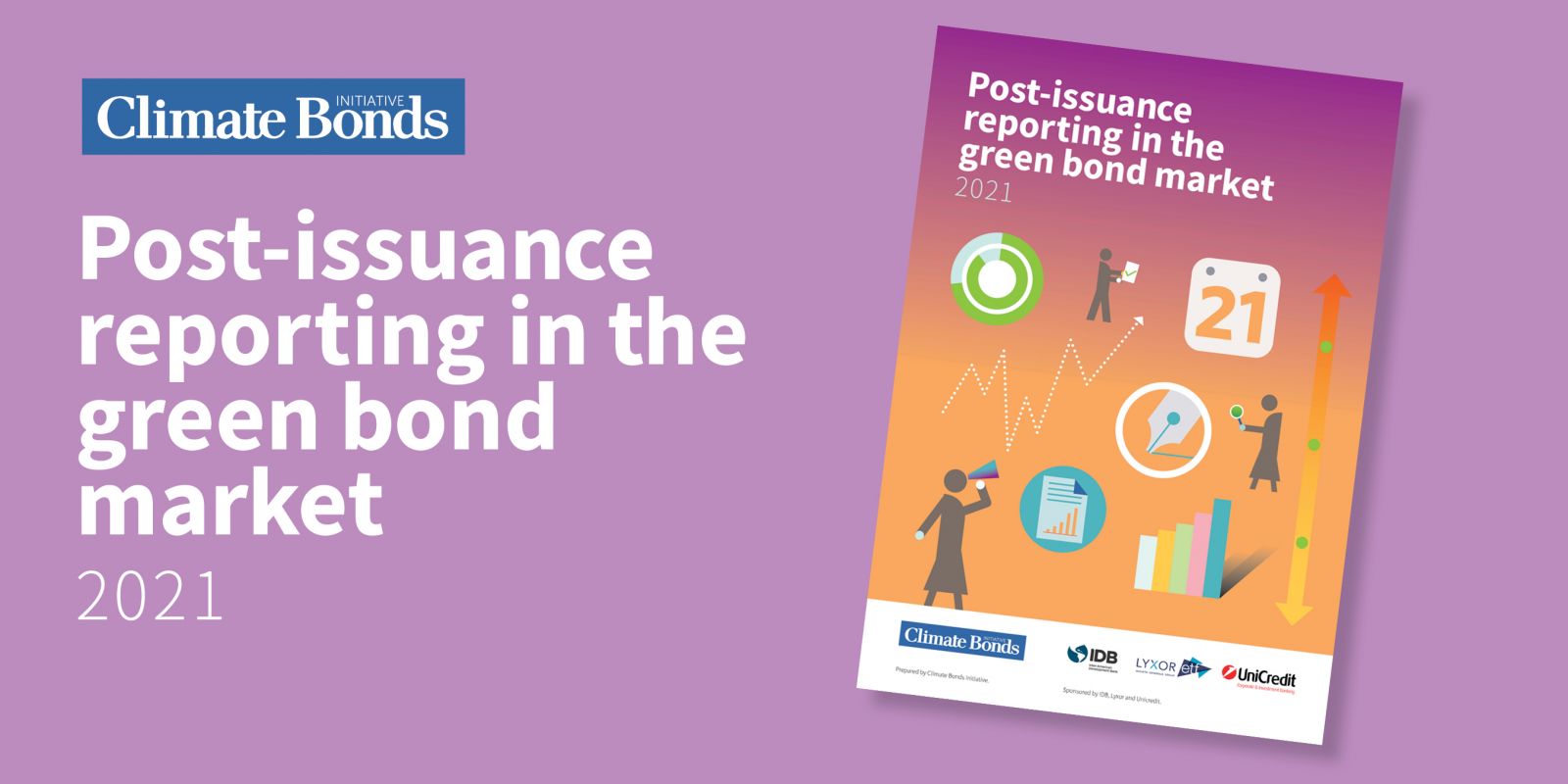 Climate Bonds has released the Post-issuance reporting in the green bond market 2021 report, our third iteration, looking into the availability and attributes of use-of-proceeds (UoP) and impact disclosure for green bonds. 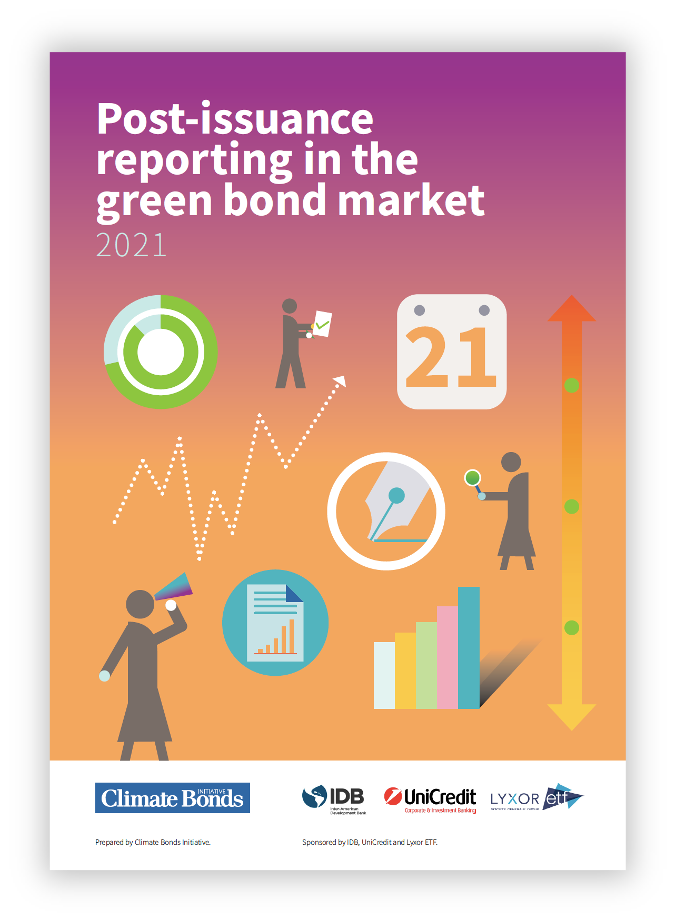 Supported by IDB, UniCredit and Lyxor ETF, it is an in-depth review of green bond reporting, shedding light on post-issuance reporting practices and identifying avenues for further improvement in this space.

The analysis is based on a review of green bonds included in the Climate Bonds Green Bond Database issued between Q4’17 and Q1’19, with the bulk of the research conducted during 2020. 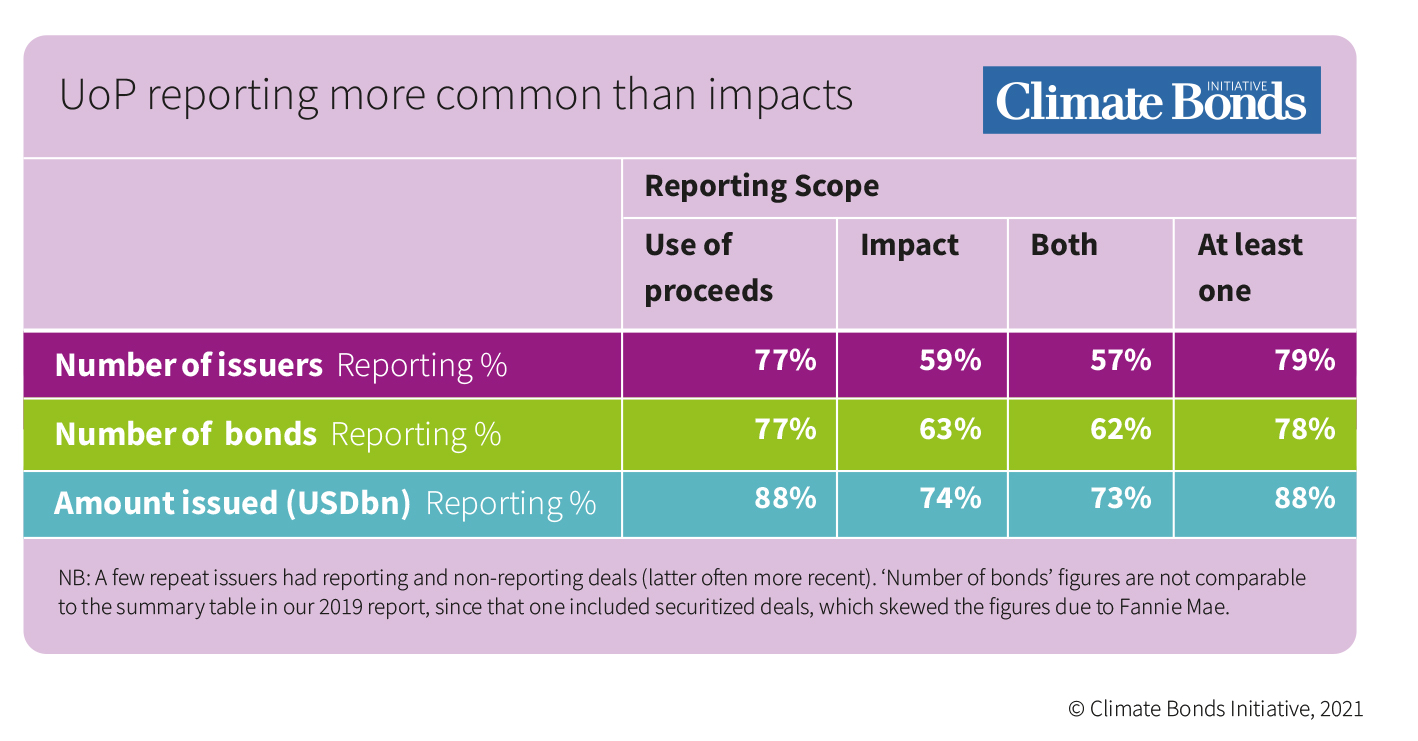 Research was conducted just over one year after the end of issue cut-off period; the figures cover bonds issued between Q4’17 and Q1’19, with the bulk of the research conducted in mid-2020. This allows for more than a year since the end of the issue date cut-off, but less than the two-year maximum recommended by the Green Bond Principles.

Greenwashing is rare. From our estimates, almost all non-reporting issuers at the time of research have now reported at least UoP. Our estimates indicate reporting would be close to 100% if repeated now for the same bonds.

In addition, no bonds were excluded from our database following the post-issuance research, reflecting our robust database methodology and the fact that issuers genuinely finance green projects/assets.

Improvements in post-issuance reporting can be targeted at some weaker issuer types and geographies, as well as tackling the lack of standardisation in impact reporting.

It is rare to find any segment of the market with more non-reporting than reporting issuers, but there are variations in availability of reporting depending on deal size, external reviews, issuer type and geography. For example: 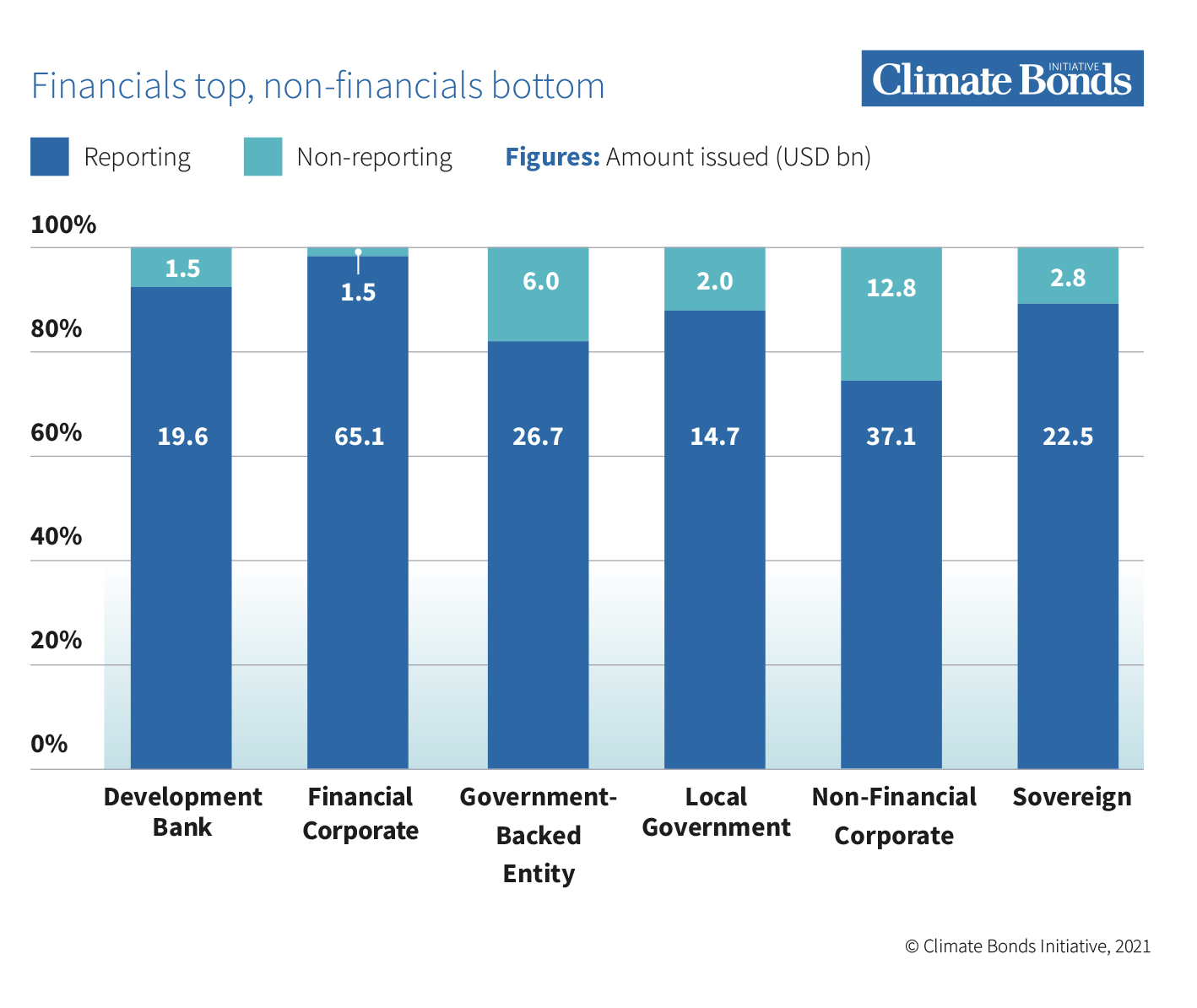 Features of quality reporting include providing clear, easily accessible and granular information, as well as reporting in line with commitments at issuance and obtaining external reviews.

We used an internally developed methodology to score issuers out of a total of 25 points, and found that:

An expanding market, together with increasing guidance and developments in reporting practices, have contributed to a rich and varied reporting landscape – now, harmonisation of disclosure must be the priority.

In the absence of a common framework to report within, issuers must independently plan, create, and publish green bond reports. This creates a market characterised by fragmented approaches to reporting, posing problems especially for impact comparability and aggregation.

The real evolution is therefore yet to come, in the form of a common standardised reporting framework and platform leading to greater availability, quality and consistency of disclosure globally.

Several promising efforts exist, including some platforms already launched or under development focusing on impact reporting such as ICMA Impact Reporting Working Group. The EU Green Bond Standard may also have potential to drive the creation of a globally adopted reporting framework for thematic debt instruments. Climate Bonds is set to expand its efforts in this space.

There is a need to assess impact holistically, use absolute – not relative – metrics, and look beyond UoP instruments for entity-level assessments.

There are growing calls for globally consistent, comparable and reliable sustainability disclosure standards, and a wealth of existing work, tools and resources could be leveraged to this end. The EU is leading the drive towards comprehensive sustainability reporting from a regulatory perspective through NFRD and more recently CSRD, supported by the EU Taxonomy for Sustainable Activities, SFDR and TCFD.

Overall, economic systems are man-made, and we can adjust them. Redesigning our system by changing the fundamental rules that drive environmental – and social – degradation will enable us to become sustainable, achieve net-zero and limit warming to 2°C (and much quicker than under current trajectories); but it will also allow us to go beyond this, expanding the common good indefinitely in a process of continuous and holistic evolution. However, a paradigm shift is needed to achieve this.

In this light, comprehensive sustainability reporting under a common framework has the power to create a purpose-driven economy with impact at its core, driving a real transition economy- and worldwide.

Take a look at the report for full insights!