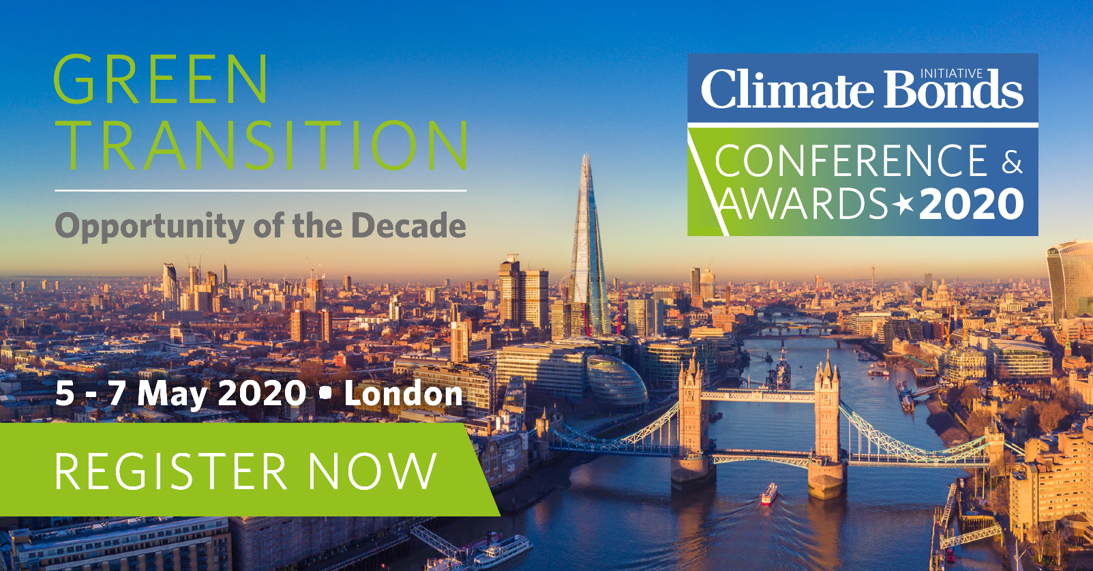 Welcome to the new Markets Monthly!

In 2020 we are looking to provide a more holistic view of the green bond market, integrating analysis and reading lists, with a focus on selected deals by new issuers.

If you’re interested in offering feedback or would like to know more about our Market Data please reach out at: dataenquiries@climatebonds.net 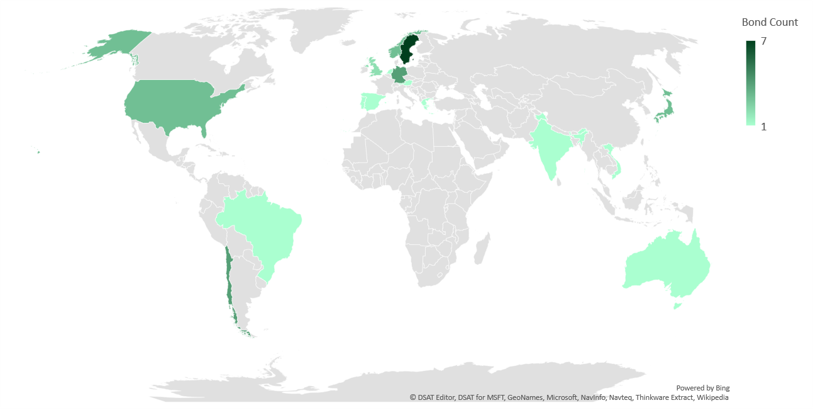 January at a glance

The year started off with total January issuance of USD14.3bn (a drop of 29% compared to January 2019), taking the total cumulative issuance volume to date up to USD789bn.

Overall, Latin America is expecting further growth in green bond volumes. Juan Antonio Ketterer from the IDB is optimistic about the region, outlining the some of the development banks’ green finance directions in this special Environmental Finance feature.

On the sovereign side, Mexico is planning its inaugural issuance sometime this year.

Denmark is also planning an innovative structure for green bonds where a vanilla issuance would be combined with a “green certificate” – both individually tradable. The Danish Treasury is considering this from a liquidity management perspective and to protect its AAA-rating.

Only two Financial Corporates issued green bonds in January 2020 with a total of USD115.9m, one newcomer to the market, Orix (Japan) and one repeat issuer, Raiffeisen Bank International (Austria). However, there are already four deals announced by banks and REITs for February 2020 (see Green Bond Outlook). 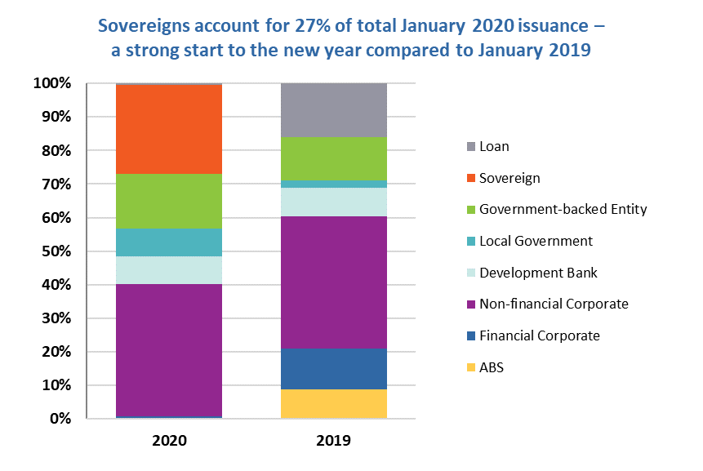 Renewable Energy took up 34% of the overall Use of Proceeds (UoP) allocation for the month (Digital Dutch Finco B.V. and E.ON allocating 33% and 50% of their issuance volume, respectively).

ReNew Power, India’s largest independent power producer, returned to the market with a USD450m deal which will be used for refinancing instruments maturing next year. Such repeat issuance shows an ongoing commitment to energy sector decarbonisation, crucial to meeting India’s ambitious clean energy goals. Financial risks for carbon intensive industries are increasing, as reported by Lex: Stranded energy assets could make up as much as USD900bn in the energy sector.

The Water sector saw the lowest issuance volume since March 2019 at USD0.7bn. Similarly, funds for Waste projects were significantly lower compared to individual monthly issuance all year in 2019. In January 2020 no Industry or ICT projects were financed. 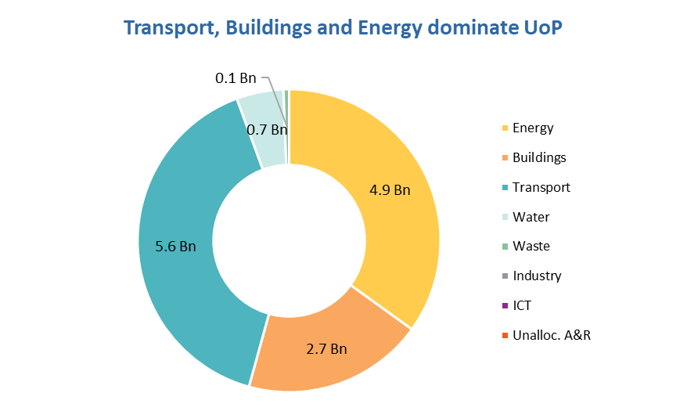 > Check out the full list of new and repeat issuers.

> Click on the issuer name to access the new issue deal sheet in our online Bond Library.

Porsche AG (EUR1bn/USD1.1bn), Germany. The luxury car maker issued its first green instrument; a green Schuldschein which is Certified against the Low Carbon Transport Criteria of the Climate Bonds Standard. It finances and refinances previous and future investments in the development and manufacture of the new Porsche Taycan.

This is the first fully electric sports car to be produced by the iconic auto maker.

Porsche is the first car maker to obtain Certification for a green bond under the Low Carbon Transport Criteria, a signal to the automotive industry for adopting best practice towards the manufacture of a greener sports car.

Porsche Taycan’s production was announced in August 2019 and the car will be available in various markets in the coming months. The manufacturing plants are based near Stuttgart, Germany. Until the proceeds are fully allocated, annual reports will be made available to bondholders only. These reports will have details regarding the allocation of proceeds.

In January 2020, two major grid operators from the United Kingdom and Spain entered the green bond market financing a variety of projects collecting more than USD1b of funding together. These players are crucial in spurring the shift to renewable energy, as acknowledged at the Future Energy Summit in Abu Dhabi in the middle of January.

National Grid (EUR500/USD554m), a non-financial corporate from the United Kingdom, issued its inaugural green bond maturing in 5 years’ time. This senior unsecured green bond benefits from an SPO issued by DNV GL. Emphasising the importance of decarbonising the energy sector, the National Grid will contribute to the UK’s Net Zero Carbon by 2050 target.

Allocation and impact reporting will be available through the company’s website or the annual report within a year from the first borrowing date and will continue until full allocation. The allocation report will include: the list of eligible green projects, the aggregated amount of allocated proceeds to each eligible project category, the ratio of financing and refinancing, and management of unallocated proceeds. The impact report will include indicators such as CO2 emissions avoided, and renewable energy sources connected (MW).

Climate Bonds view: Decarbonising the energy sector plays a major role in shifting to a low-carbon economy. In addition to the process of power generation itself, it is vital to invest in grid infrastructure and storage technologies. The National Grid is doing exactly this in order to contribute to the UK’s target of becoming carbon neutral by 2050, whilst adding to the yet sparse pool of 15 British green bond issuers. Volume is currently at a total of USD15.3bn in green bonds outstanding with the largest proportions going towards renewable energy (29%) and water (23%) projects.

The Green Bond Framework covers a broad spectrum of eligible categories on the core business side (such as connection infrastructure and retrofits to reduce energy losses) as well as the operational side (e.g. green buildings).

To date grid operators from 10 different countries have issued green bonds, mainly from Europe. We hope that this encourages issuers from other regions to consider such projects in the future.

Information on allocation and impact of the green financing will be provided on an annual basis on the company’s website until full allocation of the net proceeds. These reports will include information such as the total amount invested in the eligible projects, the ratio of new and existing projects, the year of investment, the balance of unallocated proceeds and the geographical distribution of assets.

Key measures disclosed in the impact report will be the increase of renewable energy capacity and estimated annual CO2 emissions avoided. The impact report may also include case studies.

Climate Bonds view: Spain ended 2019 with renewables accounting for almost half of the total installed energy generation capacity. Red Eléctrica’s green bond underpins this trend and the country’s ambition to decrease its carbon footprint and to switch to 100% renewable electricity by 2050.

It’s positive to see such transparency in post-issuance reporting, which will also include the geographical distribution of assets financed. Not only is this level of detail rare to see in green bond reports, but it is also particularly important for industries comprised of interconnected networks of operational assets, which grid operators clearly fall under.

Visit our Bond Library for more details on January deals and a full history of debut issuances going back to 2017.

Overall, deals from four financial corporates are scheduled for February. The majority of the issuers come from Scandinavia.

After Peru and Colombia’s preliminary announcements last year, Mexico is also planning to join the green bond market with inaugural issuance foreshadowed for 2020.

Ecuador came out with its first Sovereign Social Bond in January financing the country’s housing sector.

Spain will likely issue its first green Sovereign bond in the second half of 2020 with a 20-year tenor. EPSA is also expected to tap the green bond market again to finance solar projects. 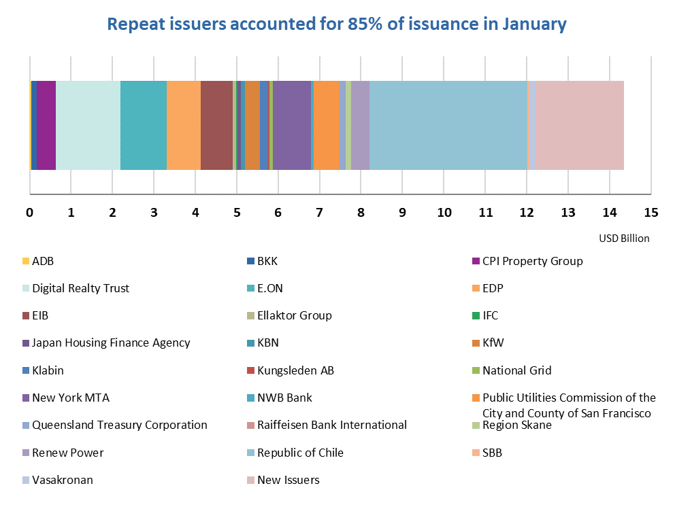 Your Feedback is welcome.

Watch this space for market developments and any if you have any data requests please send them to dataenquiries@climatebonds.net.