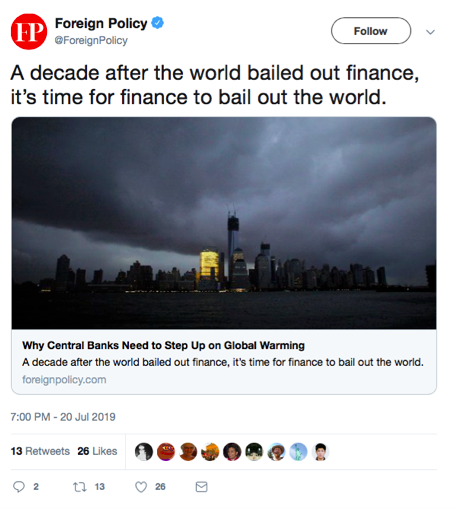 An excellent, insightful analysis of the climate-related social and economic risks, on one side, and ability of the financial system to bear their weight, on the other.  Author says that up-to- date response of central banks to climate change is defensive and calls for a more proactive model. Green bonds are important part of Tooze’s insight as he suggests there is “a strong case for funding a large part of this decarbonization drive through the issuance of long-term debt.” Author argues that massive volume of green bonds should be issued by public investment banks or by national governments and that it is the role of central banks to act as a backstop, “a buyer of last resort”.

His article offers also a great insight into the abilities of the insurance sector to act as shock-absorber in case of catastrophic weather events becoming a norm. Tooze lays out two detailed scenarios for decarbonisation: a “shock-free” one, where taxes on carbon are telegraphed far in advance thus giving industry time to adjust. Second one - more likely – is a panic-driven decarbonisation.

Acting as a backstop to the issuance of a massive volume of publicly issued green bonds is certainly a novel role for the central banks. But after their exertions in the 2008 financial crisis, central bankers, of all public officials, can’t plausibly retreat into an insistence on the limits of their mandate. When faced with the prospect of global financial collapse, they engaged in extraordinary measures to stabilize the global banking system and flood the world with liquidity. The climate emergency poses a risk that is even more existential.

Bloomberg Opinion, How Boris Johnson can defend the City of London, Mark Gilbert

Author argues that UK, in the face of the no-deal Brexit, should grasp every opportunity to position itself as a hub for green finance  – that opportunity lies, he says, in issuing a sovereign green bond.

Prior to entering Parliament, the newly installed chancellor of the exchequer, Sajid Javid, was a managing director at Deutsche Bank AG. So he, of all politicians, should appreciate that the City needs to grasp any and every opportunity to position itself for a post-Brexit world. Prime Minister Boris Johnson should allow him to instruct the DMO to embrace green bonds as a relatively cheap way to put London in the mix — and the sooner, the better.

Author argues that a lot is to be done in the area of green bonds post-issuance reporting. He says the sovereign issuance scores generally better in this area and takes an opportunity to call on the UK government to issue green gilts.

The green bond issued recently by the Netherlands had a clear framework with ambitious commitments on renewable energy, energy efficiency and water management (…) we believe the UK should consider issuing green gilts to fund improvements to energy efficiency, public transport and sources of clean energy, and these initiatives will help to provide clear frameworks for such issuance.

Article points to an analysis that suggests green bond issuance might – in a short term – experience a slow-down due to stringent nature of the EU Green Bond Standard. However, quoted BMO strategists says that in the long term, the new standard will likely result in significant supply growth by driving certainty in the market.

Green bond supply from around the world in the second half of this year may slow from a record first half, as issuers take time to meet tighter standards on sustainability for activities these bonds are intended to fund, BMO Capital Markets analysts said on Wednesday. 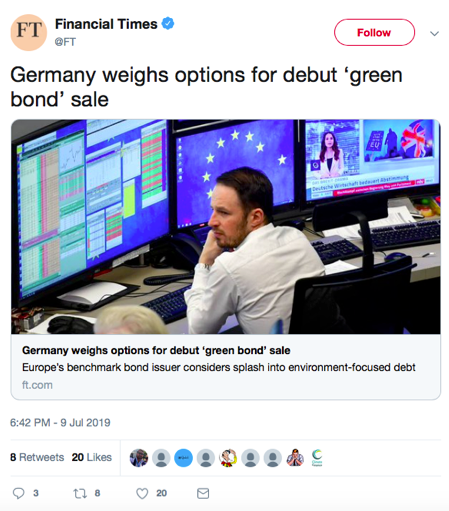 According to the Climate Bond Initiative, the region was the source of half of all green debt issued worldwide in the first quarter of the year. Despite the central role of German sovereign bonds in European debt markets, however, green German government debt has so far been notable for its absence.

Sweden’s largest pension fund Alecta has welcomed the government’s plan to issue green bonds for the first time by next year – but others have voiced doubts about the proposed environmentally-linked sovereign debt.

Sean Kidney told Japan Times that because of peculiarity of its various industries, Japan should develop its own taxonomy inspired by the EU’s one.

“For example, agriculture is a complicated area in which Japan should have its own criteria,” Kidney said.  According to him, the key is to bring such regional characteristics and differences together to create a global taxonomy that everyone can agree on because climate issues as well as economic and investment are all universal factors.

Diverse investor demand and potentially favourable financing terms in a new asset class of transition bonds may help to encourage the shift in brown companies and industries Takatsuki mentions. A different class of bonds would also have other benefits – chiefly ensuring green bonds remain green and free from greenwashing.

It makes sense that green bonds are meant for green companies. But there aren’t that many of them -- not enough to meet the rising demand from investors who want their money to have a positive impact on the environment.

Journalist spoke to multiple asset owners and investment managers. Conclusion from these conversations is that shortage of issuers and high yield issuances are key problems for the GB market. Impact of the EU taxonomy was also discussed.

"One of the problems is greenwashing, which I'm hoping the European Union's taxonomy will help with," says Mikael Bek, head of environmental, social and governance at PenSam (…) "We are considering investing in green bonds," (…) "We need a larger market. The EU taxonomy will help with clarifying the requirements for proceeds. Then we hope the market will increase."

An interesting $1bn green bonds scheme marked as the "world's first" has been launched at the London Stock Exchange. It is focused on supporting sustainable soy production in underutilized land in Brazil.

SIM [ Sustainable Investment Management] will arrange $1bn in green bonds over the next four years, which is expected to result in 180m tonnes of responsible soy and corn, worth around $43bn in the first decade. The first $300m bond issuance is planned for the planting season of 2020.

We believe this is the world’s first green bonds scheme that finances farmers and producers who commit to using degraded land instead of expanding into existing grasslands. (…) The market is now responding. Green investors can provide not only the financial support but the solution needed to help achieve responsible soy and corn production in Brazil.

Germany is posed to remain in the global top five in terms of green bond issuance in 2019 according to a new report from CBI.

According to a new report released by the Climate Bonds Initiative, Germany ranked as the fourth largest country in terms of green bond issuance in 2018 when the global total surpassed USD 167.7 billion. The US ranked first with USD 34 billion issued, followed by China with USD 31 billion and France with USD 14 billion.

The first half of 2019 saw a “surge” in green sukuk issuance, said the Climate Bonds Initiative in a new study.  The increase in activity is thanks to Indonesia’s second sovereign green sukuk and debut deals from Malaysian Pasukhas Group and the UAE’s Majid Al Futtaim (MAF), said the study.

Investing in Regenerative Agriculture (podcast), Sean Kidney, the $100 trillion bond market everyone in regenerative ag and food should know about

The European Commission’s expert group on sustainable finance last month published its long-awaited final recommendations for a taxonomy of environmentally sustainable activities, which is at the heart of the EU executive’s plan to harness the finance sector for its fight against climate change.

The launch of the recommendations of the TCFD and the EU’s Sustainable Taxonomy are expected to help define the boundaries of what impact, green and sustainability investors are looking to back.

To help asset owners and managers meet that goal, the European Commission released results June 18 from an expert working group that set out a detailed taxonomy — a classification system — for evaluating how sustainable a particular corporate activity is for the environment.

The taxonomy is best compared to a green encyclopedia for financial market participants. An encyclopedia that provides guidance to investors that are looking to finance the transition to an  economy in line with the goals of the Paris Climate Agreement.

The EU is currently finalising a “taxonomy” aimed at shifting financial flows towards sustainable assets. However, Germany is leading a group of countries trying to muddy the waters by removing the disclosure requirement (…)

The expert group’s report follows on the Commission’s May 2018 legislative proposal on an EU taxonomy.

BNP Paribas Investors’ Corner, What does ‘green’ mean? The EU’s taxonomy spells it out

The proposed taxonomy, which will be continually updated and refined, aims to enable capital markets to identify and respond to investment opportunities that contribute to the EU’s environmental policy objectives.

GreenBiz, While you were grilling, the world moved forward, Joel Makower

and much more in Italian media.

The Republic of Chile has hired Cleary Gottlieb Steen & Hamilton LLP in Buenos Aires and New York and Morales & Besa in Santiago to issue Latin America’s first ever green sovereign bonds, through two international transactions worth a total of US$2.4 billion.

Chile’s impeccably timed and well-executed deal saw a near 10x oversubscription on its dual-tranche green issuance worth nearly USD2.4bn (equivalent) (…)

Much more coverage in the June media digest.

Auckland Mayor Phil Goff says the combined $350 million raised through the framework will be strongly welcomed by ratepayers.

Auckland Council was awarded a Certificate of Recognition at the Climate Bonds Initiative 2019 Green Bond Pioneer Awards in London earlier this year. The certificate is awarded to issuers, regulators and service providers that have played a pivotal role in growing the Green Bond market in 2018.

The company claimed that it became the first private enterprise to have received certification from the Climate Bonds Initiative.