Author talks about the huge pressure to find more issuers in the market with “lots and lots of willing buyers but not enough suitable sellers”. He wonders if the green bonds market can afford to stick to its puristic principles if it is to reach the desired growth pace. Journalist explores avenues that the market can turn to.

One option is to expand the universe of issuers by allowing corporates that have non-green operations to issue green bonds against distinct, green-qualifying parts of their business. This will only work if the market can come up with a definition of green that is clear but, more importantly, far more flexible in terms of recognising change at the margin and rewarding behaviour. 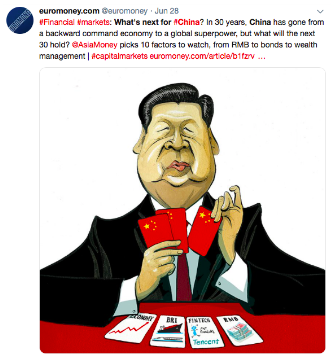 A nice read that recalls an unrealistically-sounding history of China from thirty years back (author calls it “three decades of defying all the odds”). He sets out 10 predictions for the future of China – number 2 is that the country will “clean up its act” and become leader in green finance and green bonds.

China accounts for 70% of all green bonds sold in the emerging world; mainland issuers, led by financial institutions, printed $31 billion worth of green bonds in 2018, or 18% of the total, according to the Climate Bonds Initiative, ranking behind only the US.

Ma worked tirelessly to transform the institution into a clarion voice on green finance. And it worked. It was the first central bank to accept green bonds as collateral when banks borrow from it. In 2017, working with the Bank of England and the Banque de France, the PBoC unveiled the so-called Network for Greening the Financial System, an unofficial mechanism designed to force banks to lend better and greener.

A decade ago, green bonds were virtually non-existent. Today, they are a rapidly growing asset class, bringing much-needed new capital not just to the clean energy sector but to energy-efficient buildings, sustainable land use, waste, water and transport. According to the Climate Bonds Initiative, global green finance needs to reach $1tn by the end of 2020 and continue to grow each year thereafter. 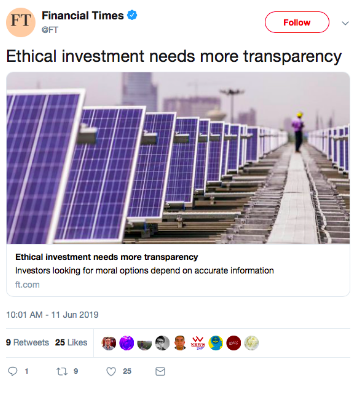 Authors of the article advocate for high standard of disclosure in the burgeoning $30tn responsible investment market.

Either way, investors deserve transparency and clarity about what they are buying. Savers on the lookout for ethical investments will need to decide for themselves what is consistent with their principles and bear responsibility for their choices. That means higher standards for disclosure rather than a one-size-fits-all “kitemark” for what counts as truly good.

FT outlines findings of two influential financial surveys: The Rockefeller-Longitude poll and UBS’s poll of 600 institutional investors. Both showed that majority of investors actively embrace the ESG concept into their investment decisions.

More than half of all retail investors who have placed money in so-called impact investment products, such as green bonds, expect to increase their share of the sector in the next two years, a survey by the Rockefeller Foundation and Longitude Group shows.

Author cites data that shows that only 5-10% of all green bonds proceeds to date have been directed towards funding biodiversity conservation projects.

Analysts point to a number of factors holding back the development of the market. Chief among them: a lack of investment-ready projects that offer meaningful deal sizes for investors to justify the costs of due diligence.

In the IFLR’s influencers section, CEO of the Climate Bonds Initiative, warns of the political and financial impact of climate change and calls on the private sector to “modernise before the regulation does”.

However, in spite of the work done so far at the policy level, private sector action has been slow. “There is very little understanding of where the impact is, even though we are beginning to experience some very volatile weather – we’ve seen little progress yet,” says Kidney. “Overall the investment industry is concerned and looking for solutions, but doesn’t have them yet.”

Another article in IFLR that suggest taking the political impact of climate change seriously.

Sean Kidney, chief executive officer at Climate Bonds Initiative, said: “Weather is only going to get hotter, and storms are only going to get more violent. In political sense, parties now fight on a platform of climate change. It is hard not to anticipate what that will mean for different industries – and remember that emissions are continuing to rise.”

Financial News, Lost in transition: the climate revolution needs a new type of bond, Yo Takatsuki

Author thinks green bonds should be domain of high-quality environmental projects and advocates for a creation of a financial tool that will facilitate transition of greenhouse gas-intensive industries to low-emission operating.

But lumping such issuances together with traditional green bonds risks confusion among investors. The Climate Bonds Initiative, a think-tank that champions the market, said Snam’s issuance “may not be seen as a green bond by some”, adding: “fossil fuel power generation and infrastructure does not meet CBI’s green bond screening criteria, so the bond is not included in the CBI green bond database”.

Bloomberg Opinion, Green Bonds Are Finally Sprouting Up All Over the Globe, Brian Chappatta

Author points to a stark difference between the current green bonds market landscape and 2018’s slowdown. He calls it “a comeback for green bonds”

To be clear, the Climate Bonds Initiative’s stated goal of $1 trillion in yearly green-bond issuance remains a ways off. But 2019 has brought signs that it’s not just a pipe dream. May’s $23.8 billion was the second-highest monthly volume on record.

Another article with a tangible “before 2018” spirit: media are enthusiastic about the upward trend in green finance area.

Money is gushing into any kind of asset labeled green or sustainable. The frenzy now has investors and firms alike grappling with what counts as “green finance”—and with funds that are no longer seen as green enough.

Author prizes the innovative deal structure introduced to Schuldschein market by engineering firm Dürr where spreads can be cut or raised based on sustainability target performance. He thinks bond markets should adopt this.

Green bond purists will take a while to get used to it. They like to feel their money is going to green ends. But the issuer was usually going to do those activities anyway, and the investor remains exposed to all its brown activities. With an ESG ratched, the whole organisation has an incentive to improve.

IISD, Who is Investing in the Technology Transition to a Low Carbon Economy, and Where?, Beate Antonich

As the market accelerates and green bond volumes increase in Asia, standard guidelines are essential to promote integrity and transparency. This will inspire confidence among investors that green bonds are a viable asset class. Further, crowding in mainstream investors will be critical for a robust green bond market as will be a strong regulatory and policy foundation for a green economy.

Global green bond issuance has surpassed the $100 billion mark already this year, the first time the milestone has been reached in the first half of this year, the Climate Bonds Initiative said on 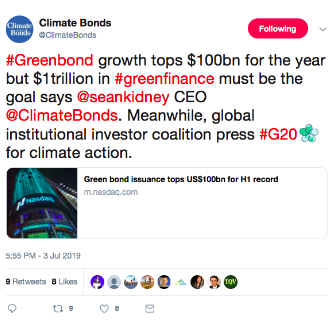 This year marks the third year issuance has topped US$100bn. In 2017 it reached that benchmark in November, and last year it surpassed that level in mid-September.

Cumulative green bond issuance has reached nearly $107 billion, according to the Climate Bonds Initiative, a London-based non-profit which promotes investment in the low-carbon economy.

With more than €15 billion worth of green bonds issued since January, France has become a leader of green finance, ahead of the US and the Netherlands.

The record means the global green bond market has quadrupled since 2014.

The milestone sits within bullish forecasts for the green bonds market in 2019. Total issuance projection for the whole of 2019 range from S&P Global Ratings' $180 billion to the $240 billion forecasted by Swedish bank SEB.

The benchmark was first met in November 2017 during COP23 and in mid-September in 2018.

The largest Sovereign green bond in 2019 to date has been a Climate Bonds Certified issuance from the Netherlands at $6.7 billion.

The new benchmark indicates strong growth in the sector, and has been welcomed by supporters.

Indonesia is the fifteenth biggest issuer of green bonds and the only Islamic economy in the world's top 15, for the first half of 2019, according to data from the Climate Bonds Initiative. 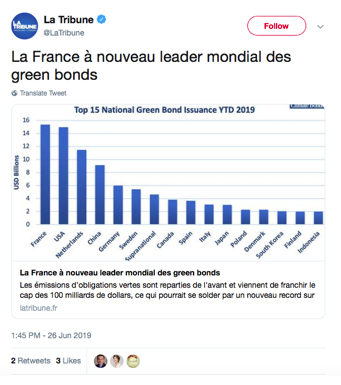 Europe sought to increase the flow of money into businesses that tackle climate change on Tuesday with the publication of European Commission guidelines on what qualifies an investment as environmentally friendly.

The European Commission has published a new guide to help around 6,000 insurance firms, banks and listed companies report how their activities impact climate change.

The TEG’s proposed taxonomy includes economic activities that are already low carbon as well as “transition activities”, such as steel or cement manufacturing.

"If the EU taxonomy is applied to financial regulation, it could urge banks to shift financing from environmentally-unfriendly projects to friendly ones.” said Chie Mitsui, an ESG expert at Nomura 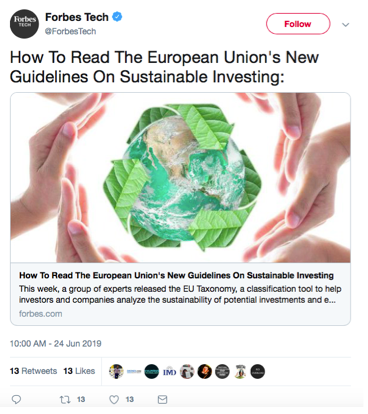 Under the proposed taxonomy regulation, institutional investors marketing environmentally sustainable investment products would be required to explain whether, and how, they used the taxonomy criteria.

“(…) In this area, there are positive developments from the European Union and the European Commission: the recent reports on EU sustainability taxonomy and EU green bond standard.(…)  said Michael Nellemann Pedersen, director of investments at PKA, in the news release.

“We’re in a climate investment race; to attract the hundreds of billions in private capital needed annually to meet climate and sustainability goals,” said Sean Kidney, CEO of Climate Bonds Initiative. “The EU Taxonomy will clarify what needs to be done and make it easier for investors and banks to grow sustainable finance markets in Europe.”

More media coverage of the EU TEG work will be published in a separate report.

Chile is preparing to hit the euro market with a Green bond in coming weeks after mandating banks on the deal (…).

Brookfield Properties, a subsidiary of Brookfield Asset Management Inc., got the A$880 million ($608 million) loan to refinance facilities that were used for the two energy-efficient office towers in Perth in Western Australia.