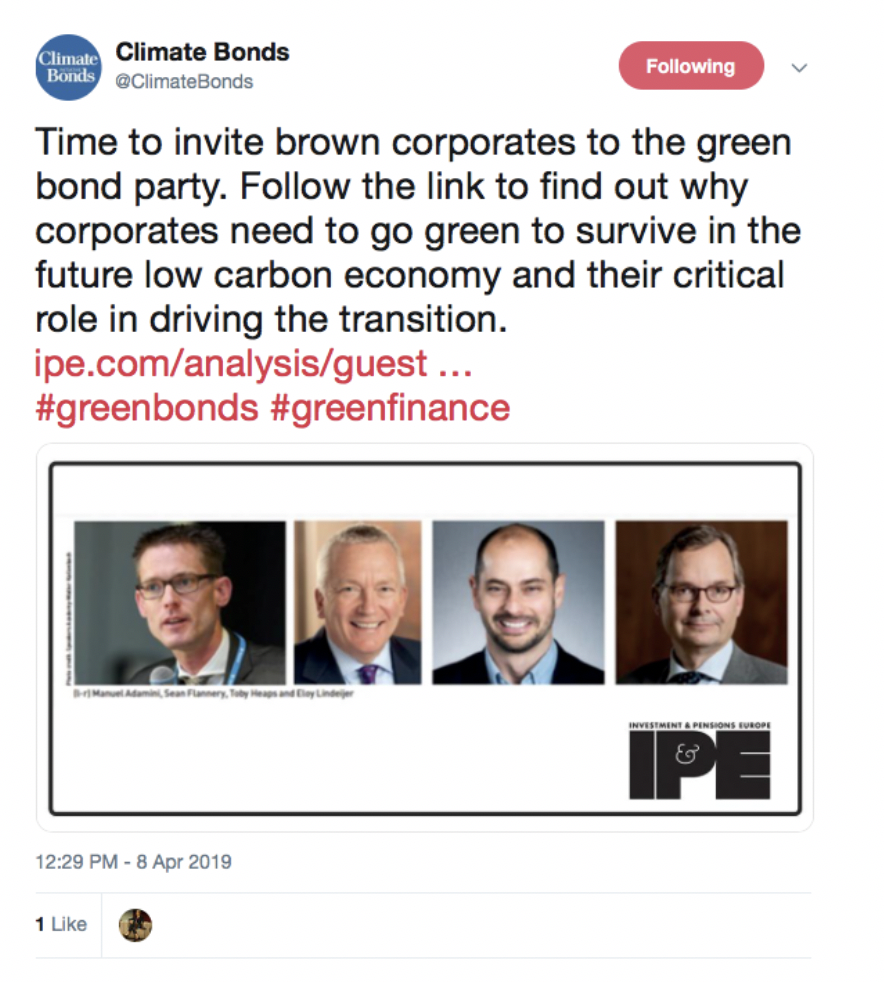 Authors argue that browns corporates should be allowed to enter the green market when financing technological energy efficiency improvements or radical operational changes. However they stress the role of gatekeepers “when admitting brownish sectors to the green game”.

A deal-flow-focused debate around brown-to-green transitions has not been held in the market. But we need it so badly. Without it we risk simply enjoying the good vibes of bringing relatively clean issuers to market – while dubious on climate impacts. The financial sector, led by investors, needs to work constructively with the largest corporate emitters to build a financial marketplace that acts as a catalyst to greening our real economies.

Nick Robins warns financiers, policymakers and other market participants not to overlook climate in the face of upcoming economic slowdown. He lists five actions to divert the crisis.

On the sustainable finance front, a key opportunity for 2019 is the agreement of a shared language for green investments, a process led by the EU’s work on a taxonomy. This could provide the basis for leading countries and institutions to build a common framework, easing the way for governments and financial institutions to move capital in the right direction at speed and scale.

Bloomberg, Bonds to Save the Planet, Emily Chasan

Absence of green bonds in the secondary market might be something that impedes its growth.

Although the surge of interest in Europe last year, which saw Ireland, Belgium and Lithuania sell environmental bonds in 2018, lifted sovereign issuance volumes by 52pc to a total of $16.3bn (€14.5bn), the asset class accounts for just 1pc of European government bond issuance.

Author suggest that issuance of sovereign green bond could be a bolstering measure to Germany’s slowing economy.

But here is an idea that could provide a much-needed boost to the German economy, while specifically addressing ethical considerations: the issue of green German government bonds, or 'green bunds'.

In-depth analysis of the current trends in green bonds market.

Regardless of the speed at which regulators in the U.S. and abroad enact policies aligned with the pathways laid out by climate scientists, we believe that green financing, and the green bond market in particular, are poised for significant growth.

After Cicero’s recent paper warning that EU’s proposed taxonomy might slow down new issuers from entering the market, Aila Aho, the rapporteur for the sub group that is devising proposals, spoke to Environmental Finance and said the fears are premature.

But Aho said the Cicero paper was "premature" in its judgment, adding that there is another, less strict critierion for energy efficiency in buildings alluded to in the taxonomy, which had yet to be fully defined.

Author says that Islamic green finance and City of London are a perfect match.

There is a growing interest around the globe in Islamic green financing including Green Sukuk. The Climate Bonds Initiative, the Clean Energy Business Council and the Gulf Bond and Sukuk Association have jointly established the Green Sukuk and Working Party to develop and promote Islamic financial products to invest in climate change solutions. The eligible assets for Green Sukuk as per the Climate Bonds Standards Certification include wind energy, solar parks, biogas plants and others.

Network for Greening the Financial System (group of 36 Central Banks) called for global standardised framework on climate disclosures and development of a clear system for classifying the environmental-friendliness of economic activities.

According to the group, Chinese authorities are expected to release an updated version of the country’s green bond taxonomy this year. In the EU, the law-making institutions are gearing up to negotiate the final version of the taxonomy proposal put forward by the European Commission last year.

Xinhua reports ‘a soaring growth’ of the Chinese green bonds market in Q1. 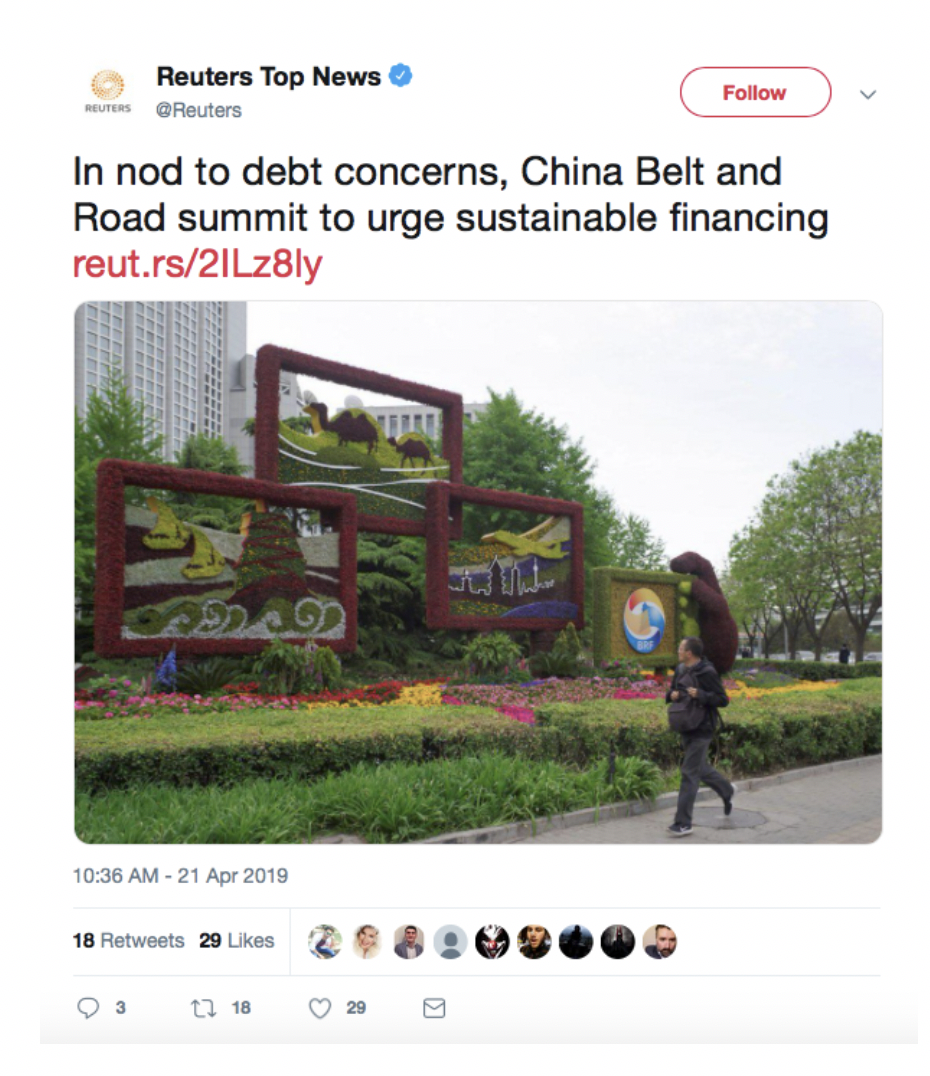 Draft communique before the China’s Belt and Road initiative summit reiterated earlier promises for sustainable financing and added a line on green bonds.

The Chinese leadership has heard this criticism. In remarks to the forum participants last Friday, Xi said that “we must adhere to the concept of openness, greenness and cleanliness.” (..) The final declaration mentions the word “green” seven times. Signatories “underline the importance of promoting green development,” and “encourage the development of green finance including the issuance of green bonds as well as development of green technology.”

The Asset, Will the wave of green investment turn into a torrent?, Tom King

Author wonders if 2019 will be a year when the pent-up demand for sustainable products in Asia will be finally met.

The year 2019 is widely tipped to be the year when sustainable investments, including socially responsible investing and environmental, social and governance (ESG) investing, establish their place in Asia’s mainstream financial markets.

Energy Live News reports on the Memorandum of Understanding signed between Agricultural Development Bank of China (ADBC) and the Climate Bonds Initiative.

The Memorandum of Understanding (MoU) signifies a mutual consensus on the importance of the implementation of such projects as well as green bonds in China and the need to direct private capital to support the nation’s transition to a low carbon economy.

"The market is totally flat," said Sean Kidney, CEO of the Climate Bonds Initiative (CBI) in London. "Mexico is dead, and the bond market in Brazil only had one deal with Klabin." The São Paulo-based paper company sold $500m in 30-year green bonds at 7.125% in March. 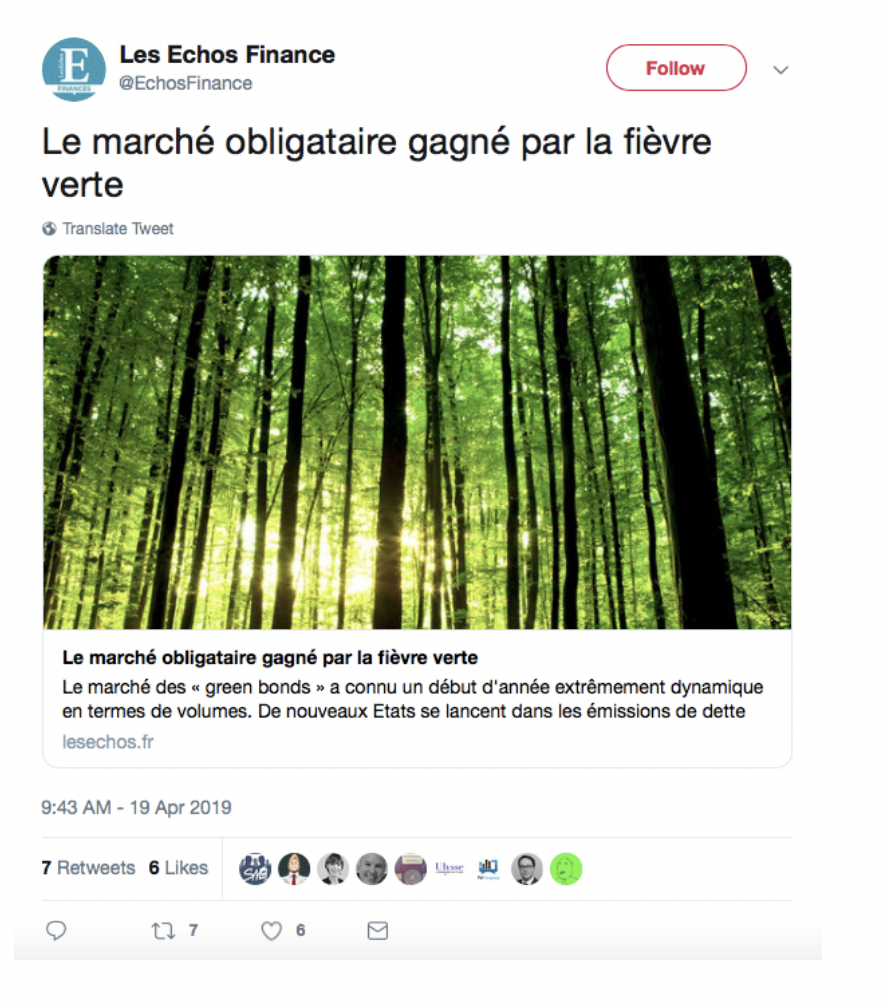 Start of the year presents a positive outlook for the GB market.

Green bonds market insight with a focus on Africa.

Author of the article says money managers make more room for green debt in their portfolios. 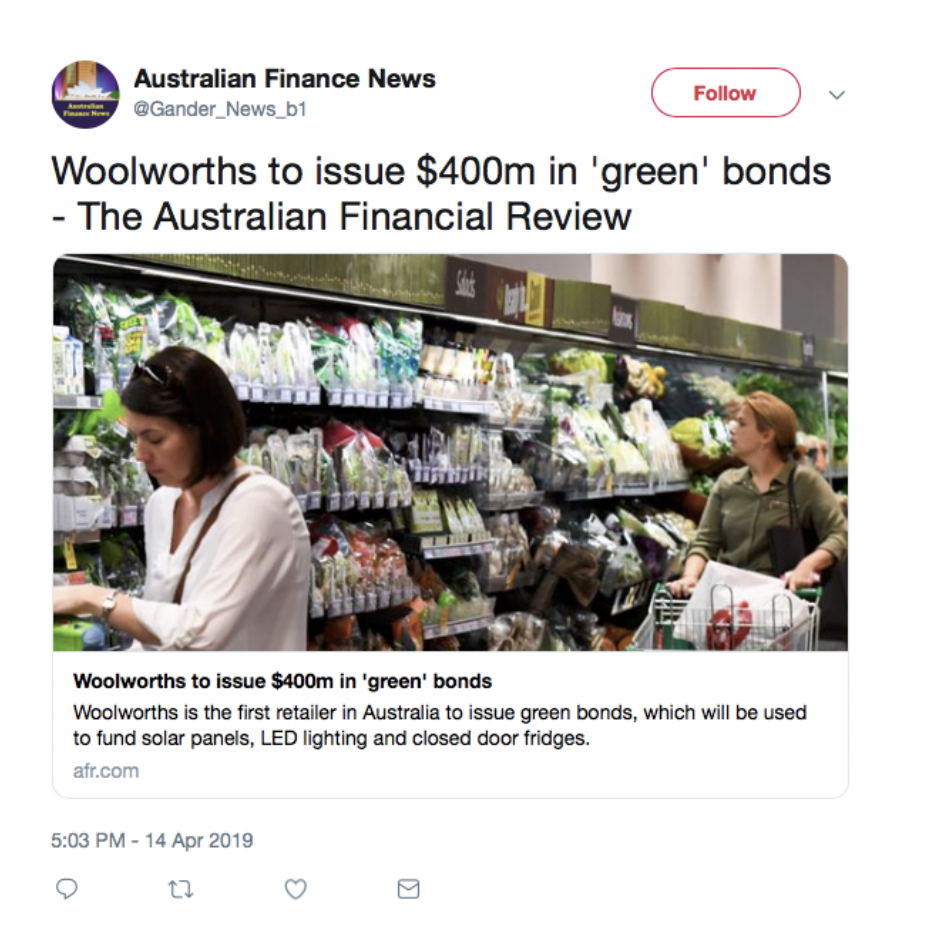 ANZ, Citigroup and JP Morgan were joint lead managers for the first green issuance by an Australian retailer and the first by a supermarket globally under the recently approved Climate Bonds Initiative framework for that sector.

The bonds — certified by the London-based Climate Bonds Initiative (CBI) — will allow investors to support projects and assets that will deliver positive environmental outcomes, such as the installation of solar panels.

It will be regulated by the Climate Bonds Initiative (CBI), a London-based independent accreditor who will allow Woolworths to begin furnishing their environmental credentials

The new asset class may provide a cheaper source of funding for climate and sustainability projects and allow corporate treasury teams to participate in the ''environmental, social and governance'' (ESG) movement.

Nedbank reaped the rewards of its first green bond on the JSE when investors bought R5.5 billion of them in an oversubscribed frenzy on Tuesday.

SOVEREIGN GREEN BONDS IN THE PIPELINE

The Netherlands will become the latest European state to tap investor interest in credit that helps limit harmful emissions, with Poland the first in 2016, followed by France, Belgium and Ireland.

The Dutch government said it aims to raise between €4 billion ($4.5 billion) and €6 billion from its inaugural sovereign green bond on 21 May.

The green bond, maturing on January 15, 2040, has been certified by the Climate Bonds Initiative and will make the Netherlands the first country with an AAA credit rating to issue such securities.

Chile has ambitions to be the first Latin American sovereign to issue Green bonds as part of a broader environmental strategy and as it looks to widen the country's investor base.

Peru could become the second sovereign issuer in Latin America to sell green bonds after Chile prints between $1.5bn and $2bn in cross-border notes for environmental projects, LatinFinance has heard.