The Climate Bonds Initiative has released a new country report, analysing the latest progress in the French green bond market.

Commissioned by Lyxor, the report is the latest in a new 2018 series of Overview & Opportunities-based analysis that commenced with the twin Nordic and Baltic Public Sector and Green Bond Markets in the Nordics reports published in February 2017, and the subsequent Korea Climate Bonds Market Report released during our Annual Conference this March.

The report is available in both English and French.

France boasts one of the earliest domestic green bond markets and in 2017 ranked No.3 in the record year of global green bond issuance behind the US & China.

French issuers are supporting market transparency with an excellent track record in the use of external reviews, global best practice with over EUR3bn of Certified Climate Bonds and a high standards of disclosure in annual green bond reports. 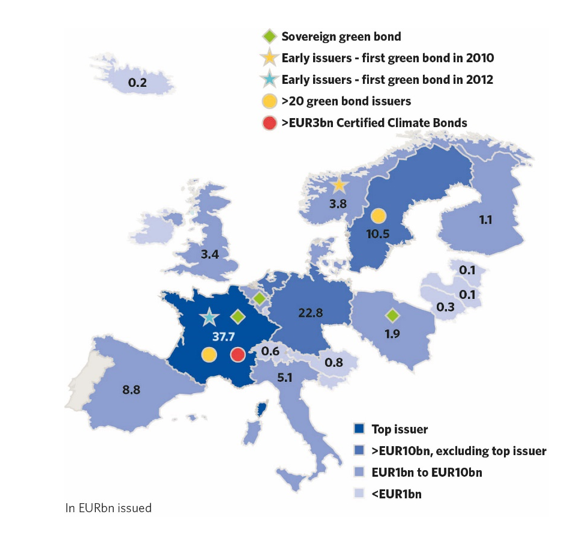 The country’s green bond market has been fuelled by corporate and government-backed issuers since 2013, with a recent push from the state via the landmark Sovereign Green Bond of Jan 2017. We recognised the French sovereign issuance in our 2018 Green Bond Pioneer Awards.

On 9th April this year, Agence France Trésor (AFT) renewed its commitment by tapping its sovereign Green OAT for a third time for EUR1.1bn as part of the EUR8bn of eligible spending for 2018. 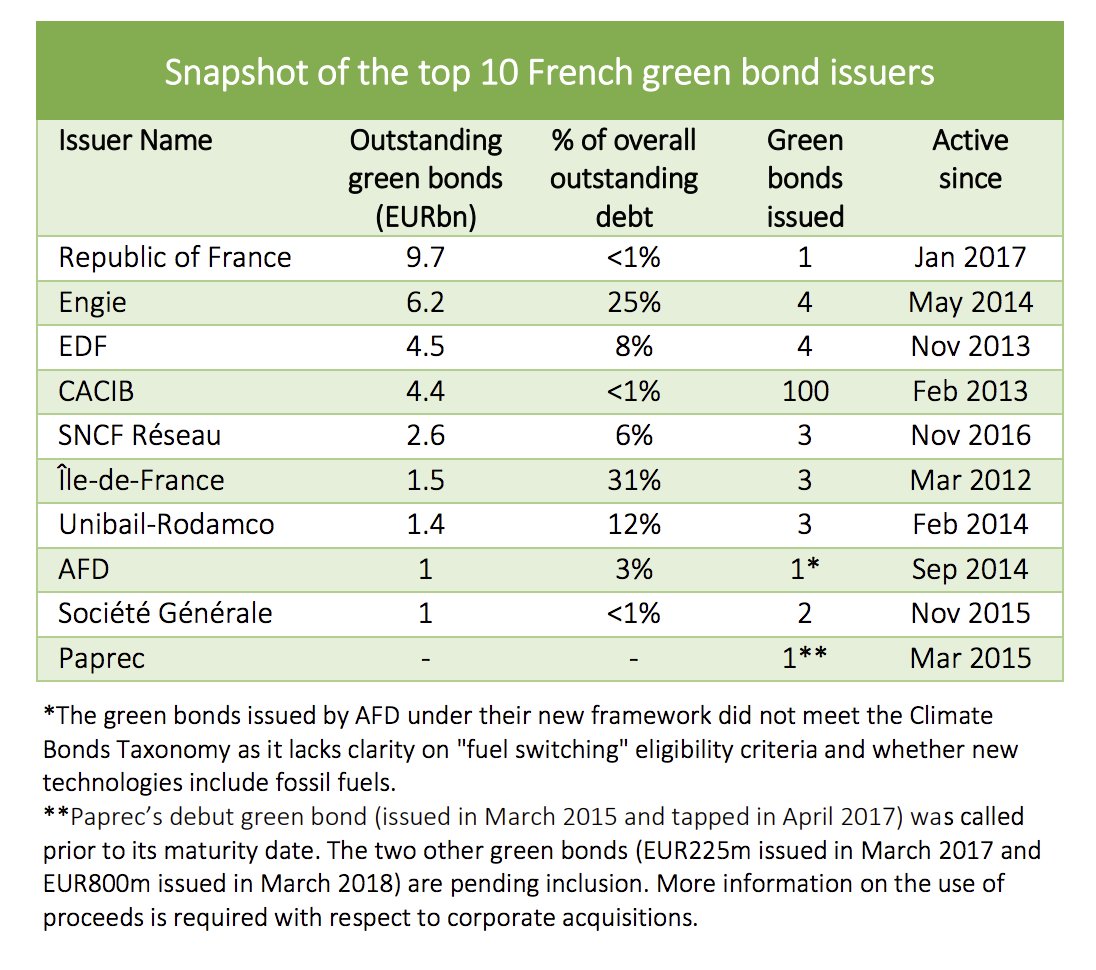 On a policy level, Article 173 of the Energy Transition for Green Growth Law, a ground-breaking piece of legislation introduced in August 2015, has had a resounding impact in Europe. In December 2016, the European Parliament adopted the IORP II Directive, a new regulation that will require pension funds in the EU to account for climate-related risks in their investment strategies.

Furthermore, the French government has embarked on a Big Investment Plan worth EUR57bn, to be implemented during the current 5-year term. It includes EUR20bn for the energy transition. Numerous initiatives have been created to drive market momentum, including asset labelling to increase visibility and Paris EUROPLACE’s Finance for Tomorrow, originally launched in May 2016 as Paris Green & Sustainable Finance Initiative.

Banque de France has started assessing banking risks related to climate change. It's one of the founding members of the Central Banks and Supervisors Network for Greening the Financial System (NGFS), which held its inaugural meeting in Paris in January 2018. French banks have proposed, through the French Banking Federation, a green supporting factor for climate related finance and the concept has been put forward to the European Commission's Expert Group on Green Finance (HLEG).

From the investor side, French institutions have largely integrated the sustainability agenda in their investment strategies, and French asset managers have embraced green bonds with dedicated funds offered by Amundi, AXA, BNP Paribas, Crédit Mutuel and Natixis/Mirova, and a green bond ETF by Lyxor.

The French Government has been a consistent world leader on climate action. President Macron is continuing on this path and it's having an impact.

French green bonds stakeholders are also at the forefront of green finance and we expect they'll continue making big contributions.

This combination of political will and investor action has put France in the world's top 3 for green issuance.

Disclosure: Organisations named or linked to in this post are Climate Bonds Partners. A full list of Partners can be found here.