On Tuesday, the Treasury Corporation of Victoria (TCV) made its first foray into the green bond market with an AUD 300m AAA-rated offer with a coupon of 1.75% and a five year maturity. The verification report was provided by DNV GL.  The underwriter was NAB (who issued its own certified Climate Bond in 2014).

The bond was fully subscribed in 24 hours by 17 institutional investors. LGSSuper, a leading Australian pension fund is amongst the buyers.

Kanga News reports (based on NAB data) that 60% of the deal was sold to fund managers and a further 10% to insurance investors.  At 87% of the book, placement was largely domestic and just 27% went to banks. This contrasts with non-green Australian semi-government syndications, where half or even more of the paper is typically placed with bank investors.

This is the first government based Climate Certified bond issued anywhere in the world. Here at CBI HQ we applaud the international leadership shown by the Andrews Government.

Even better, with Victoria’s large pool of qualifying assets, could there be more green bonds in the pipeline?

Lastly, will other governments in Australia and globally follow suit?

There’s comment in our Blog Post from Wednesday and don’t miss this smooth promotional video video outlining the green benefits to Victoria.

We’ve always said, when China joined the market, it wouldn’t do it by halves. And we were right.

But, we also knew that green definitions in China wouldn’t be straightforward.

The huge environmental challenges facing China mean that there are some differences between local market and internationally accepted best practices.

Take the dubiously named ‘clean coal’ (not just dubiously named in China, we might add – the rest of the world seems to have fallen for that one too). Air pollution problems in Chinese cities make the closing down of old and dirty coal plants and replacing them with newer, less polluting ones a local priority.

For the moment, the 'green definitions' sanctioned by China's central bank (the PBoC), includes such investments.

However, the steepness of the emissions reduction needed to hold global warming at 2°C means that coal in any form is excluded from international green bond definitions.

That's because improvements in the emissions efficiency of coal fired power plants has the perverse effect of extending the life of these assets, beyond the point at which we will need to close them down to meet global carbon budgets - it makes the overall transition harder.

This position was first outlined in CICERO's "second opinion" for the World Bank's first green bonds, and has since become an accepted understanding in European and North American green bond markets.

Worth noting, all the Chinese bonds mentioned here  have committed to annual reporting, something that is required by the Peoples Bank of China for all bonds issued by financial institutions in the Interbank market.

Another whopper out of China this week with Industrial Bank just announcing a CNY 20bn issued in the national interbank market. It is their second corporate green bond (plus one ABS), with a term of three years and a coupon of 3.2%. The proceeds will be used for a green industry project.

If you brush up on your Mandarin skills, you can read the press release here.

Now, here’s the catch… while they have done a fantastic job pushing the green agenda in China, it’s likely that this bond won’t be included in our overall numbers.

The “pollution prevention” category is the tricky one. As we've pointed out, the Catalogue allows clean coal projects within this category.

We had a look at reporting on their previous green bond and unfortunately some clean coal projects were included (about 26% of the proceeds) so we have taken them off our list.

We do note that this bond fully meets regulatory requirements in China and we applaud that.

It’s not quite the size of the Chinese Industrial Bank’s bond but still a biggie – Shanghai Pudong have come back to the market with a RMB 15bn (USD 2.4bn) bond, issued on Monday.

Nominated projects include 6 categories under the PBOC Catalogue:

We are unsure at this stage about which projects the proceeds will go to, so it’s possible that these may turn out (like Industrial Bank) to be problematic – watch this space for more info.

EY provided a report on the bond to ensure its consistency with the Catalogue.

It’s Bank of Jiangxi’s debut into the market and nominated projects are aligned with the Catalogue.

Projects include recycling of renewable resources, production and supply of thermal power (we are researching what this includes), ecological agriculture, husbandry and fishery (agriculture is a tricky area when it comes to climate); water treatment and recycling; industrial energy saving (may include CHP); pollution prevention (may include clean coal); and environment restoration.

Given our reservation with some of these areas, we have not included it in our overall numbers yet but will continue to monitor reporting.

EY has provided a review confirming compliance with the guidelines on Green Bond Issuance in China’s Interbank Bond Market and the Green Projects Catalogue.

The CNY-dominated green bond is both the first green bond and first bond issued by the bank. It has a tenor of 5 years, a coupon of 3.07% and an AAA rating from local ratings agencies Chengxin and Lianhe.

The New Development Bank (NDB) was established by the BRICS countries - Brazil, Russia, India, China and South Africa. They officially grouped together in 2009 to press for a bigger say in global financial matters, and the NDB, headquartered in Shanghai, started work last year.

The bond is denominated in Yuan (CNY) and the bank also plans to issue further bonds in other member currencies. This is in order to mitigate the foreign currency risk of funding infrastructure projects and help develop local currency fundraising markets.

The proceeds of the bond will be used for infrastructure and sustainable development projects in the BRICS countries and will follow the green guidelines set out by the PBoC.

We’re unsure at this stage what these will include. However, in April, the bank announced its first four projects – loans worth USD 811m for 2.37GW of renewable energy assets. It expects to announce further projects soon.

The bond has a tenor of 10 years and a rating of A and A2 from S&P and Moody’s. Underwriters were Bank of China, Bank of America Merrill Lynch, HSBC and JP Morgan.

Proceeds are outlined in the review provided by Sustainalytics:

Waste Management: Link REIT aims to reduce waste to landfill by 40% by 2022.

Suzano is an interesting one for us – its bonds are part of the climate-aligned market in our annual State of the Market report, as all of its forests are certified by FSC or equivalent. We always said that this flagship report shows a source of future bonds and this bond demonstrates that.

Proceeds will be used in the following areas:

Sustainalytics provided a review of the eligibility criteria for the bond here.

The bond will refinance a three-unit run-of-river hydroelectric power generation facility, constructed on the Captain Meldahl Locks and Dam system, an existing dam on the Ohio River. The project entered into commercial operation in April 2016 has a capacity of approximately 105MW.

Hydro projects are always a bit tricky as there are so many factors which can make a project net positive or net negative from a climate perspective – factors include: reservoir size, geographic location and vegetation at the reservoir (tropical or non-tropical) and technology.

Climate Bonds has just convened a Technical Working Group to work on hydropower Criteria, but we note that the dam on which the hydro plant has been constructed was built in 1964. It is likely that the net impact of this project, not taking into account the impact of the already-constructed reservoir, is positive.

Sustainalytics makes the following point in its review:

“The Meldahl Project does not fall within the generally accepted limit for small-scale run-of-river hydro of 15 MW. However, because it is located at the existing Captain Anthony Meldahl Dam on the Ohio River, it will not result in the negative environmental impacts, such as loss of wildlife habitat and aquatic biodiversity, that are often associated with large-scale hydro development, which typically involves the construction of a new dam and reservoir.”

Proceeds of the bond will be allocated to the construction of a new seven story in-patient building for which they aim to achieve LEED Silver status.

LEED Silver seems a bit unambitious - especially given that they have achieved Gold in the past. But, they are going for Silver certification for two reasons:

1) it will be built on an existing site and will use the energy infrastructure of the existing plant. While the facility itself will be efficient, the project does not improve the efficiency of the central plant infrastructure

2) the facility will be the first new building to be certified under the LEED for Healthcare construction rating system.

Thrive Renewables (previously Triodes Renewables) is a UK renewable energy company. They issued an inaugural green bond (not bad considering it is their first-ever issued bond!) with a fixed 5.5% coupon and a 5-year tenor through the Oxford-based positive investment platform Ethex.

The deal will refinance 2 operating wind farms built in 2015 in Scotland, adding to the 38 UK turbines they already own.

ESSL to Issue in London?

Issuance from India is growing, we’ll keep you posted as more stories emerge.

Finland’s Munition plans to launch debut green bond in Q3, expected to be  around EUR 500m.

MuniFin provides funding to green projects in Finland at a discount to its conventional loans. The rate at which the funding is discounted is determined in accordance with Cicero’s Second Opinion project categorisation framework.

The ‘darker green’ the project, the better the cost of funds MuniFin offers – great idea, we look forward to seeing it!

US based Digital Realty Trust has posted its Green Bond Use-of-Proceeds Statement, which details the use of the approximately USD 493m of net proceeds raised through their June 2015 issuance of a Green Bond .

Could Kenya be next for green bonds? We’re seeing lots of activity on our Twitter feed today from the Kenya Bankers Association @kenyabankers  and the Nairobi Securities Exchange @NSEKenya, talking up prospects of new green bond issuance. Our CEO, Sean Kidney, has been speaking at various Kenyan green finance events this week. Remember, you read it here first.

London Calling: New Broadcast ‘LIVE from the City of London’ State of the Market 2016 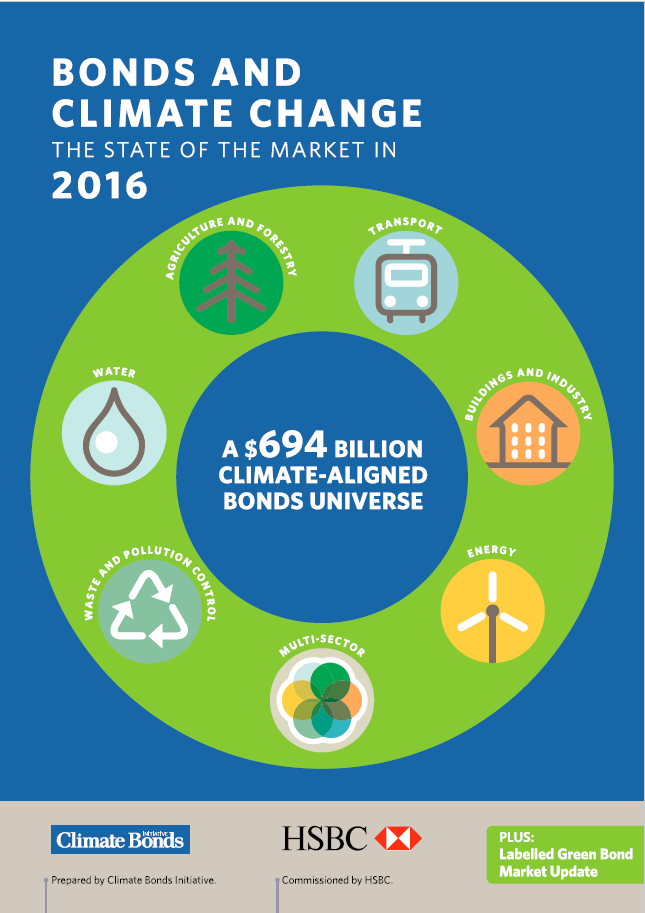 If you missed our earlier Bonds and Climate Change State of the Market launch, we're running a special LIVE webinar with a discussion of the report.