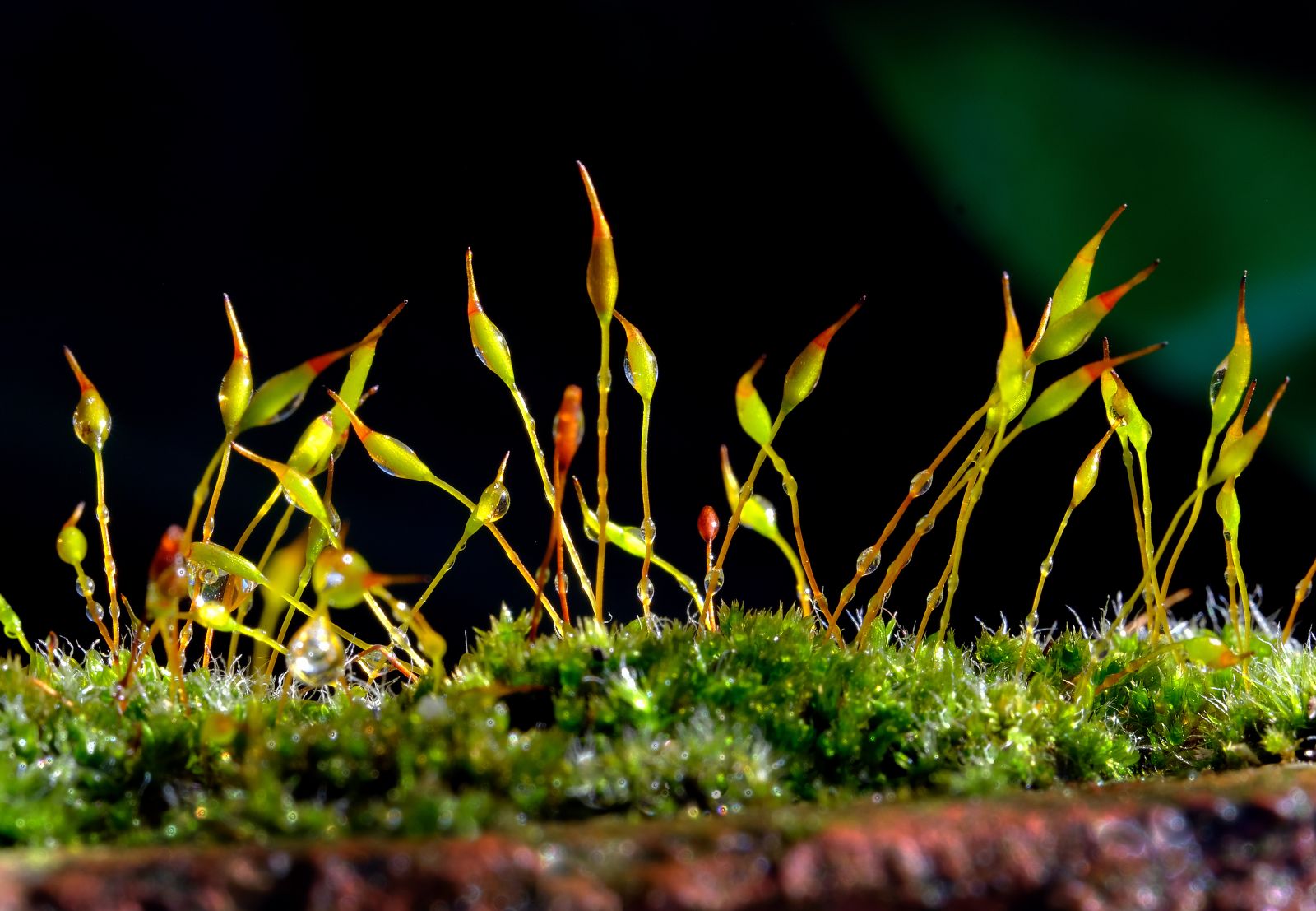 The global green and sustainable bonds market has rapidly grown (expected to get close to USD 2 trillion outstanding by the end of the year) and other sustainability-driven financial products including funds and ETFs have become an important part of the investment landscape. This has driven the growth of detailed guidance around what constitutes a qualifying investment to hold the title “green”.

In 2012, the Climate Bonds Initiative launched its voluntary guidelines for the market in the form of a “taxonomy” and related Certification scheme.

In 2015, the People’s Bank of China Green Finance Task Force (Sean Kidney was a member) recommended the adoption of what became a “Green Bonds Endorsed Project Catalogue”. Combined with robust regulation, this underpinned the subsequent rapid growth of a Chinese green bond market.

In 2016, the European Commission accepted a recommendation by the EU High-level Expert Group on Sustainable Finance (Sean Kidney was also a member of this) to develop a European “Taxonomy”. This Taxonomy is before the European parliament for final ratification, and is expected to come into force as the reference for Europe’s new disclosure regulation for financial actors.

The idea of regulatory guidance on what constitutes a green investment has now developed into a veritable “Taxomania”, with numerous taxonomies in development around the world.

Taxonomy projects around the world 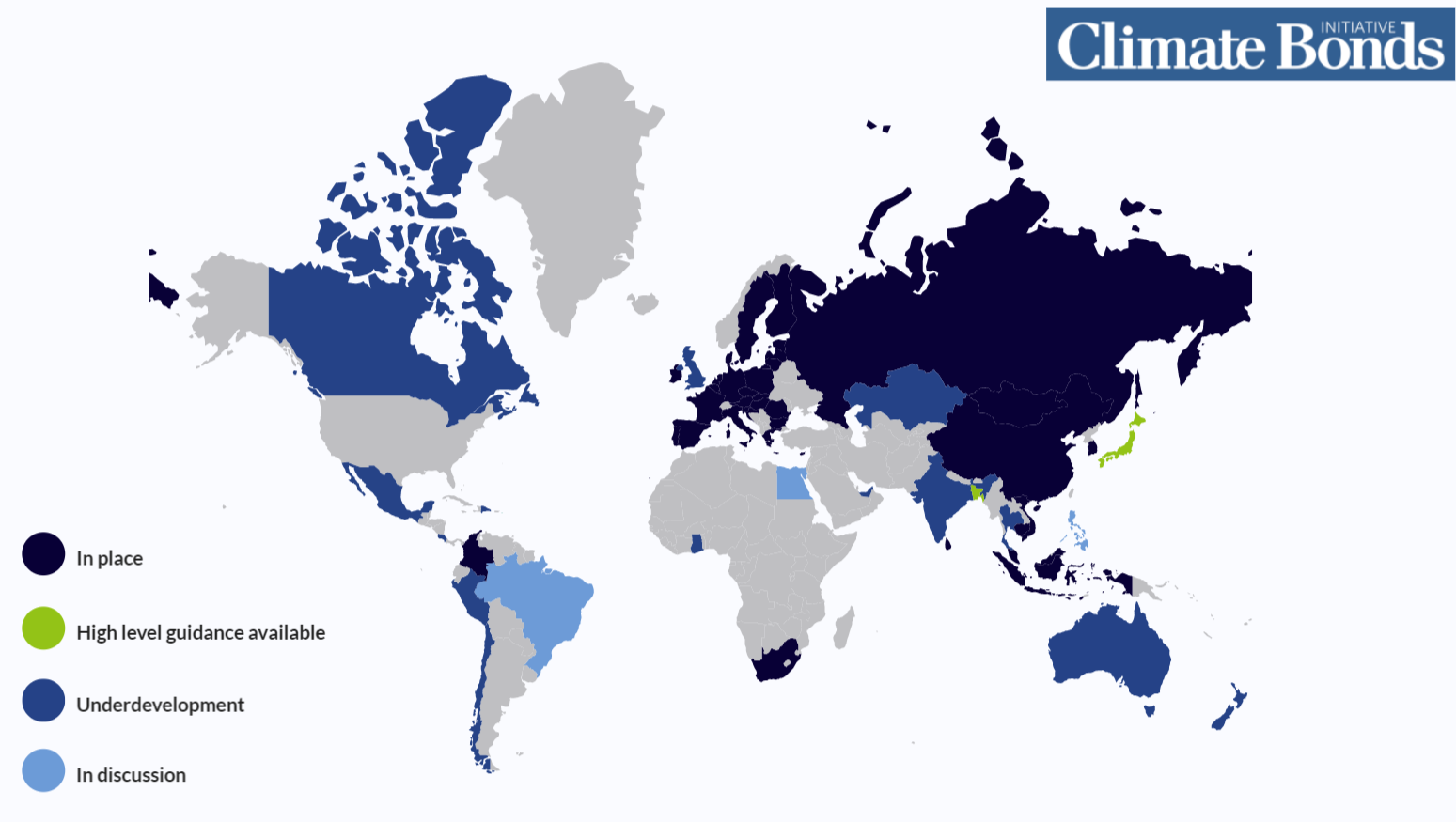 Regulation or guidance already in place

China: A “Green Bond Endorsed Project Catalogue” has been in use by regulators to guide the domestic green bond market since January 2015. An updated version of their Green Projects Catalogue for the green bonds market, backed by all major regulators, was confirmed on 21 April 2021. It removed fossil fuel electricity generation projects from the list, an action that made the catalogue consistent with international rules. The taxonomy addresses climate change, environmental improvement, circular economy, waste recycling and pollution prevention.

European Union: The EU co-legislators are expected to approve the first set of technical screening criteria for the EU Taxonomy before the end of 2021. This first set of the Taxonomy criteria is focused on climate change mitigation and adaptation measures.

However, an advisory expert group called the “EU Platform on Sustainable Finance” continues to work on further development of the Taxonomy, with a view to set out criteria for protection of water and marine resources, circular economy, pollution prevention, and biodiversity protection. (Climate Bonds is represented in the Platform).

The EU Taxonomy is notable because it has been developed as part of a wider EU Sustainable Finance Strategy and its primary use will be to support mandatory disclosure of sustainable investments and assets by investors, banks and corporates in the EU.

Japan: The Ministry of Environment first published its Green Bond Guidelines in 2017 (updated in 2020) which contain a 10-page appendix on ‘Possible examples of the use of proceeds’ that serves as a voluntary, non-exhaustive taxonomy. The Ministry of Economy, Trade and Industry (METI) released Basic Guidelines on Climate Transition Finance in May 2021 as guidelines on transition investments, although not yet a detailed taxonomy. METI has set up a Roadmap Taskforce to formulate sector-specific roadmaps.

Malaysia: Bank Negara Malaysia (the Malaysian Central Bank) published a “principles-based” taxonomy focused on climate change mitigation and adaptation. It put forward five Guiding Principles along with examples as to what types of investment qualify under each. This list is non-exhaustive.

Mongolia: A taxonomy, modelled on the Chinese Green Bond Endorsed Project Catalogue, has been developed, approved and is in operation. It includes requirements for independent verification for green bonds.

Regulation or guidance in draft, not yet final

Russia: A taxonomy is being developed by the state development bank (VEB), with relevant ministries and the Central Bank. A first draft was published in December 2020, drawing on both the EU and Chinese taxonomies. It covers pollution reduction, emissions reduction, energy efficiency and adaptation.

South Africa: A draft taxonomy has been developed by a range of domestic institutions and was published for consultation mid-year by the National Treasury. It is focused on climate change mitigation and adaptation, as well as sustainable water resource use. It draws heavily on the EU Taxonomy.

South Korea: A draft taxonomy has been developed by the Korean Ministry of Environment, closely aligned to the EU Taxonomy in objectives and structure. It has been published for consultation.

Regulation or guidance under development

ASEAN: The association of ASEAN Central Banks has set up an ASEAN Taxonomy Board to develop, maintain and promote an ASEAN Taxonomy. Work is currently underway on a first iteration of the taxonomy, expected to be announced at the November 2021 UN Climate Change Conference in Glasgow. The Taxonomy will complement the sustainability initiatives and taxonomies of individual member nations.

Bangladesh: The Central Bank has developed a taxonomy, mirroring the contents of the EU Taxonomy. It is being used to encourage and supervise banks and financial institutions to grant sustainable loans and conduct sustainable investments. The list of green products/projects/initiatives is also used as eligibility criteria for whether bank assets can be refinanced with the Central Bank under their Refinance Scheme for Green Finance. A more detailed Green Taxonomy is in development which will leverage the existing guidance as well as other international taxonomies.

Canada: An expert group of the Canadian Standards Association, made up of representatives of Canadian banks, pension funds, NGOs, asset managers, auditing firms and industry groups, with government representatives as observers, has been developing a “transitions” focused taxonomy since 2020. The stated approach was to build on existing global frameworks such as the EU Taxonomy and the Climate Bonds Initiative’s definitions. A recently appointed government “Sustainable Finance Action Council” is expected to take over supervision of taxonomy development.

Chile: A roadmap for taxonomy development was published in 2021, prepared by Climate Bonds and the Inter-American Development Bank, with development expected to start before end of year under the supervision of the Ministry of Finance and the Green Finance Public-Private Roundtable (La Mesa). It is expected to leverage the EU Taxonomy.

Colombia: Colombia’s taxonomy, developed by Climate Bonds and the IFC under the supervision of the country’s financial sector regulator and the Ministry of Finance, will be published in the Autumn of 2021. It follows the EU Taxonomy approach.

Dominican Republic: A taxonomy is under development, supported by the IFC.

India: Environmental and social objectives are currently being defined to support development of a taxonomy over the coming year. The initial focus will be on climate change mitigation and adaptation. The project is anchored by the Ministry of Finance, supported by a steering group comprising regulators and relevant ministries. The stated approach is to be in synch with international taxonomies.

Indonesia: A national task force of sustainable finance composed of relevant ministries/institutions and related stakeholders is formulating a taxonomy. It will consist of two categories: “green” and “towards green” and will be comparable to the EU Taxonomy in terms of economic classification systems and environmental objectives.

Kazakhstan: A taxonomy is under development under the auspices of the Ministry of Industry and Infrastructure Development and is expected to be published in late 2021.

New Zealand: A finance sector initiative called the Sustainable Finance Forum / The Aotearoa Circle, with government observers, is developing a taxonomy based on the EU Taxonomy. Additional work is being done on sustainable agricultural definitions. The government is also exploring the application of a taxonomy specifically for public sector procurement and policy, to be linked to the finance sector initiative.

Philippines: A Green inter-agency taskforce with the Philippines Securities and Exchange Commission and the Central Bank has started the process of developing a taxonomy.

Singapore: The Monetary Authority of Singapore published a consultation paper in January 2021, referencing the EU Taxonomy; the next phase of work is underway. Focus is on climate change mitigation and adaptation, biodiversity protection, and resource resilience. Proposed headline sectors for inclusion are agriculture, construction & real estate, transportation, energy, industrial. These sectors account for 90% of ASEAN emissions.

Thailand: A taxonomy is under development by the Central Bank, the Securities Commission and Insurance Regulator. The aim is to address local needs while also aligning with international developments. (Climate Bonds has provided training)

United Kingdom: An expert advisory committee convened by the City of London’s Green Finance Institute is currently working on a Taxonomy that the Government has said will be broadly in line with the EU Taxonomy. (Climate Bonds is represented on the expert committee).

Vietnam: A taxonomy is in development by the Ministry of Natural Resources and Environment, the State Bank of Vietnam and Ministry of Finance, with release expected in late 2021. The Taxonomy is expected to align with the EU Taxonomy. (Climate Bonds has provided training).

Discussion on possible taxonomy under way

Mexico: The Ministry of Finance, the Central Bank and financial markets regulators are in discussion about developing a Mexican taxonomy.

Sri Lanka: The Central Bank has started the process to develop a taxonomy, expected to draw on the Chinese and EU taxonomies.

While some commentators have expressed concerns about market fragmentation, it’s important to note that these taxonomy efforts are generally using common principles: science-based, dynamic, and conscious of the importance of harmonising with other taxonomies around the world so as to avoid barriers to cross-border flows of green capital.

Many of the taxonomies in development have also embraced the idea proposed in the EU Taxonomy of including “transition activities” focused on rapidly shifting high-carbon industries to alignment with the Paris Climate Change Agreement.

China and the EU are also working on what they call a “Common Ground” Taxonomy as part of the International Platform on Sustainable Finance (IPSF); Climate Bonds is supporting this work. A Common Ground Taxonomy draft report will be released in the near future, with the aim of promoting a commonly agreed set of green definitions that can be used by other jurisdictions in taxonomy development, follow this space for further updates.

This report by Sean Kidney was first published on the FOSDA web site.