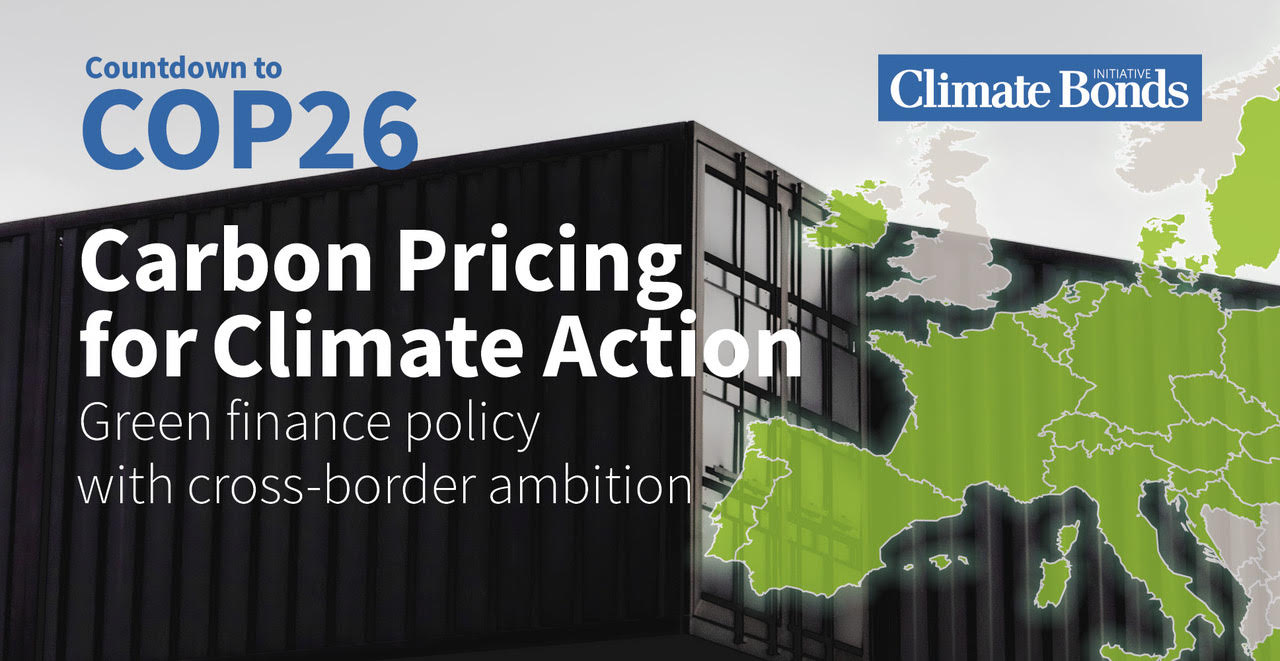 In the second of our ‘Countdown to COP’ briefings, the Climate Bonds Policy Team examine the EU’s extension of carbon pricing policies into the economic and trade arena through the Carbon Border Adjustment Mechanism (CBAM). We delve into the implications of this shift and suggest what action should be taken at COP26 to best make use of this major, but underused emissions reduction tool.

Building momentum over a decade

Carbon pricing is not new. The EU has had an Emissions Trading Scheme (EU ETS) in operation since 2005. 2021 prices are at record levels, currently trading at EUR60.6 per tonne of CO2.

China has spent has trialled emissions trading in designated regions following initial policy decisions in 2010 and 2011. Their national ETS formally debuted in July.

Twelve US states, accounting for a third of US GDP, have a form of carbon pricing. In May the World Bank reported a total of 64 carbon pricing instruments in operation, covering over 20% of global greenhouse gas emissions and generating USD53 billion in revenue. 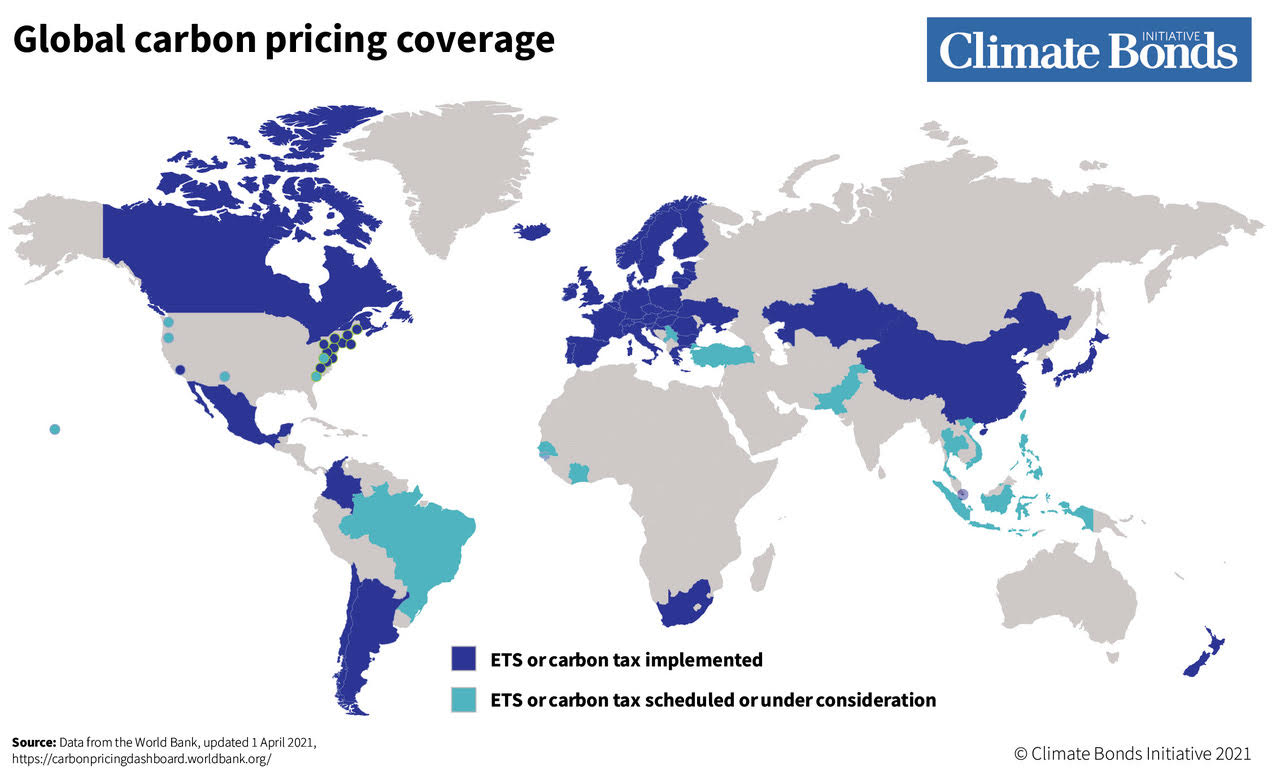 COP26 is likely to see increased commitments to the use of these mechanisms, but a key question remains: How to ensure these pricing levers drive effective change at the real economy level?

The European Commission’s Fit for 55 proposal includes the CBAM – a carbon price applied to imports of ETS-sector goods. This accompanies a major tightening of the EU ETS to achieve a 61% reduction in emissions in ETS sectors by 2030; and policy updates to support transition technologies.

The interconnectivity of the proposals means that such efforts have the potential to be greater than the sum of their parts.

The CBAM represents a shift in climate policy from the domain of science and technology to trade and economic policy. Climate considerations have entered some of the largest capital flows in the European economy.

The CBAM will be implemented to prevent potential carbon leakage, by applying carbon pricing to imports of selected goods most vulnerable to carbon leakage: iron and steel, cement, fertiliser, aluminium and electricity generation. Previously, free ETS allowances ensured these sectors' competitiveness with imports. Any carbon pricing paid in the country of production will be netted off the border adjustment.

This creates a virtuous circle encouraging a worldwide approach to to drive global climate transition in carbon-intensive sectors. Major manufacturing like countries like China and South Korea and regions in US and Canada are already implementing carbon pricing. The size of the EU’s market endows it with enormous soft power and consequently, the bloc’s trade reforms have the potential to create a domino effect of policy responses and green capital flows beyond its own borders.

International carbon markets and the possibility of linkages

China launched its long awaited national ETS on the 16th of July and trading at an average price of EUR6.45/tCO2. Even though limited to coal power, the Chinese scheme is set to extend to other sectors and become the largest in the world.

Hainan province is considering an international carbon emissions trading exchange to connect the national scheme with the global market.

On the same day as the EU announcement, the Democrats in the US Senate proposed a ‘polluters import fee’ to help pay for its USD3.5trn spending package and meet emissions reduction targets.

Whilst the proposal currently lacks details of tax rates and domestic obstacles to US climate action remain, the Inevitable Policy Response (IPR) forecasts US carbon pricing of USD65/tCO2 by 2030.

Carbon pricing is likely to stimulate investment in green products, services and technologies around the world, especially in countries which rely heavily on the EU market for industrial exports. As well as incentivising climate finance for transition efforts, the tariff is likely to give greater weight to arguments for a global carbon pricing system.

In their latest forecasting for institutional investors, the Inevitable Policy Response puts expansion of carbon pricing at 1 & 2 of their Top 10 policy forecasts. Digging deeper, IPR sees the emergence of a tiered system of global carbon prices in place by 2030, with higher bands for developed economies, led by the EU with backstop signal prices of USD60-85 by 2030 and lower bands in emerging and developing nations.

Overall, IPR identifies carbon pricing as one of several areas of higher ambition in the early 2020s, with growing pressure on policy makers past Glasgow, through to the COP 2025 Paris Ratchet, forcing an acceleration of economic and trade measures to address the climate crisis.

The increasing impetus behind carbon pricing in global economic and investment fora would back this view.

On the economic side, in late May, the updated NGFS climate scenarios projected the need for a global shadow carbon price assessment of over USD160/tonne within a decade if we are to meet Paris goals & reach net zero by 2050 in an orderly fashion.

The IMF is pushing for a global floor price on carbon, the G20 has recognised pricings’ future role and the OECD has suggested a global plan for carbon pricing, with a new proposal now being worked up for the G20 summit in late October.

The IEA and World Bank both back an extension of pricing schemes and in July the Net Zero Asset Owners Alliance, backed by United Nations Environment Programme Finance Initiative (UNEP FI), Principles for Responsible Investment and a host of heavyweight investor members, called for a binding carbon price applicable to every nation. 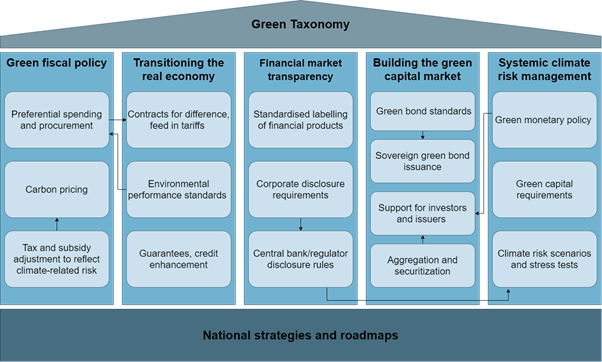 Whilst carbon pricing can stimulate green investment, it must be accompanied by economy-wide policies to support transition technologies, enabling green asset creation.

The green transition will be driven by a range of actors: central banks and regulators acting to green the financial system to support capital reallocation; asset owners and managers increasingly seeking transition strategies from corporates; and a range of carbon pricing measures that are incorporated into markets, investment & trade flows.

In addition to carbon pricing the EU could create a broad policy platform – a green window – providing preferential treatment for the international flow of green goods, services and capital.

COP26 offers an opportunity for bi- or multilateral agreements on a green window.

This could compensate CBAM’s trade curtailments and stimulate green capital flows by reducing restrictions on capital destined for green or transition projects.

MEPs have suggested that a portion of the CBAM revenue should go to the most vulnerable countries. Allocation of CBAM revenues could be made in a similar fashion to green bond proceeds.

Accompanying the CBAM with a green window and a just transition spending policy could tackle some of the criticism levelled at the CBAM.

The climate emergency requires faster responses from policymakers and the financial sector than we’ve seen to date. This structural change necessary to transition hard to abate sectors needs policy coordination, as seen in the EU’s ‘Fit for 55’ proposal.

Implementing carbon pricing as part of a package of spending and regulatory reform will increase green capital flows to fund transition. They provide the much-needed economic incentive encouraging issuers to innovate and invest.

Carbon taxes, pricing schemes and border tariffs represent a necessary progression of climate policy. As the price of carbon in the economy rises the consequences on trade and competitiveness become more important.

Stay tuned for more Countdown to COP26 coverage from the Climate Bonds Policy Team! Our previous blog in the series delves into the role of central banks in greening finance – read it here.