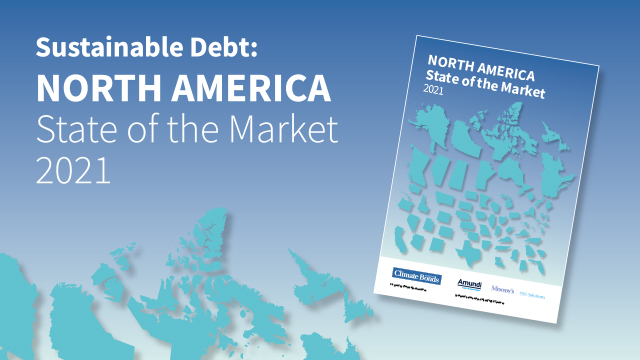 Climate Bonds has released the North America State of the Market report, revealing the remarkable growth of green finance in the US and Canada.

This report is Climate Bonds’ first stand-alone State of the Market for the North America, encompassing established green markets and a first of its kind analysis of the expanding social and sustainability bond labels, support was provided by Moody’s ESG Solutions and Amundi Asset Management. 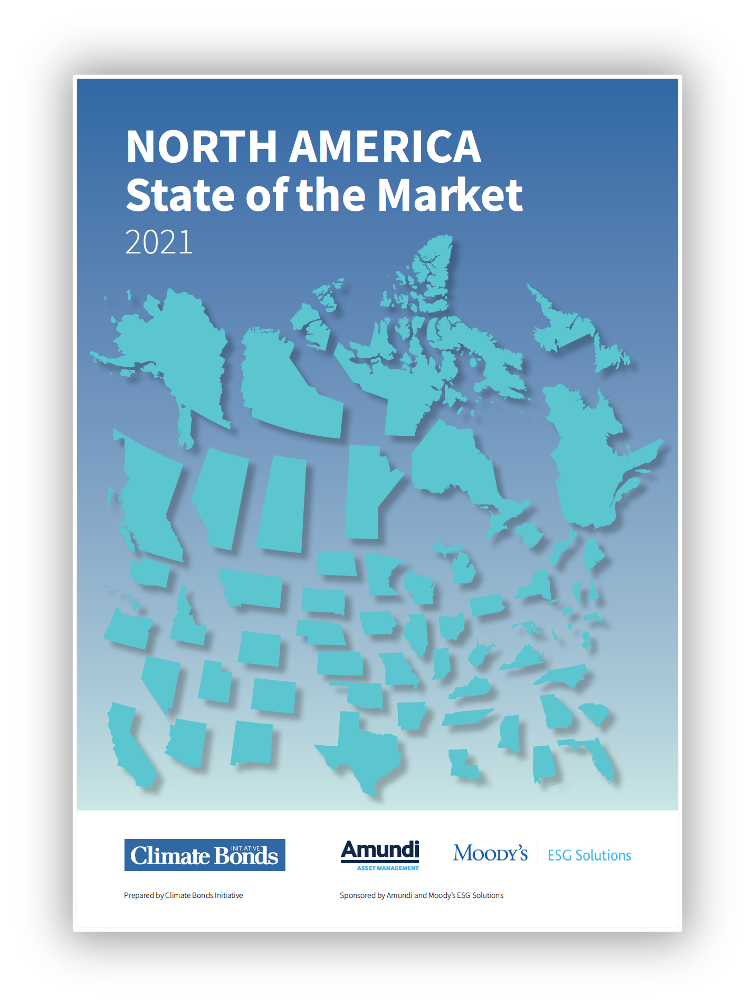 Reaching a cumulative USD311bn at the end of Q1 2021, North America has seen 6,000 instruments issued under Green, Social and Sustainability (GSS) labels since 2011. The majority of issuance is from the well-established green label with volume reaching USD271.4bn. Sustainability bonds hit a volume of USD24.3bn and social bonds reached USD15.5bn, both labels are in their infancy but growing quickly.

In the 5-years (2016-2020), the North American GSS market grew by an astonishing 76% year-on-year average and by 10% for the first 3 months of 2021. The US is the second-largest source of cumulative GSS debt globally (behind supranational issuance) and the largest single country, while Canada ranks eleventh overall, and is the tenth-largest country.

Between 2016 and December 2020, there were eight qualifying bonds originating from issuers based in Canada and 48 from the US. The analysis shows that green bonds from the US and Canada attract larger book cover and achieve greater spread compression compared to vanilla equivalents.

Three-quarters of green bonds achieved a greenium and around half of green bonds were allocated to investors describing themselves as green. In the immediate secondary market, green bonds tended to tighten by a greater magnitude than vanilla equivalents and matched indices after 28 days. This suggests that green bonds offer value to both issuers and investors.

At a Glance: US

Cumulative market totals are as follows: 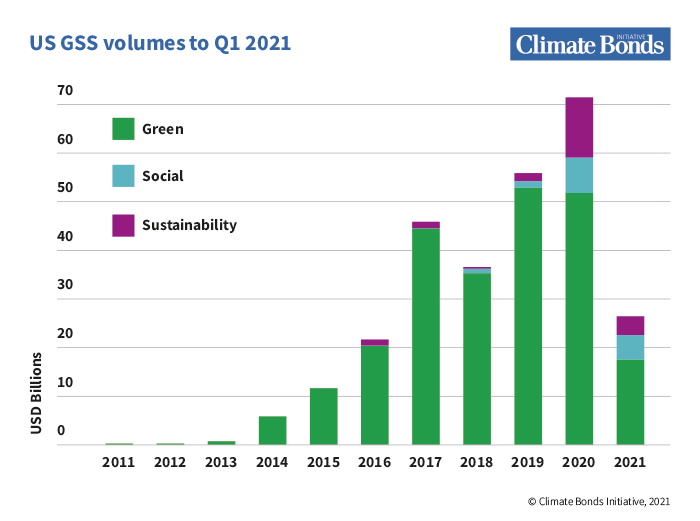 The market has several unique features, including the large volume of green Mortgaged Backed Securities (MBS) from Fannie Mae, which accounts for 39% of overall issuance, without which the US would fall behind China and France in national rankings. Green US Municipal bonds issued by local government authorities and government-backed entities make up 23% of the total volume.

The US GSS market remains largely characterised by numerous small deals, or tranches, mainly from municipal issuers which are mostly purchased by domestic retail or institutional investors.

The US social bond market is still in its infancy and the private sector has dominated issuance to date, but there is huge potential for the state sector to contribute to the growth of this market. The Biden administration’s emphasis on addressing social inequalities is expected to result in further development of this market.

The US sustainability bond market was opened in 2016 with Starbucks issuing a pair of bonds worth USD1.25bn. In 2019, new bonds totalled USD1.9bn and later in 2020, there was a dramatic increase that led to an extra USD12bn of bonds. 2021 began in a similar vein, with new bonds worth USD3.9bn having been issued by the end of Q1.

Strengthening reporting standards will ensure greater confidence and transparency in labelled markets. The US was found to be one of only four countries with post-issuance reporting below 80% and more than USD1bn issued, in a recent Climate Bonds report.

At a Glance: Canada 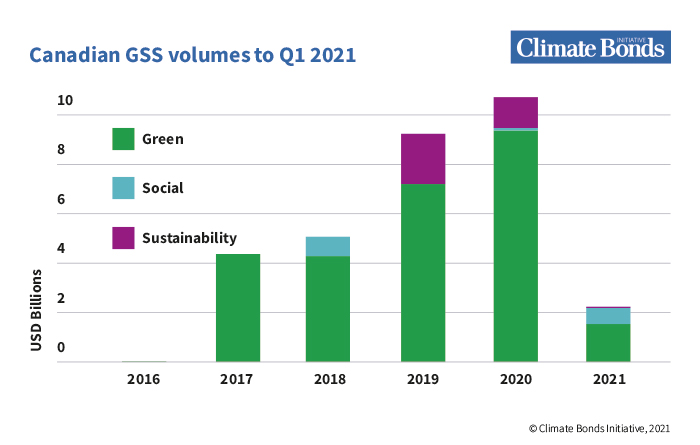 The Canadian market is populated by larger deals compared to the US, with an average size of USD366m. Larger deals help attract a broader range of international investors, which was also reflected in the fact that Canadian GSS bonds had been issued in six currencies.

Since the inception of the Canadian green bond market in 2014, the market has been dominated by financial corporates and local governments every year, except for 2015. The social and sustainability themes like the US, are in the early stages of development, with 15 bonds issued by the end of Q1 2021, cumulatively worth USD4.8bn.

Climate transition in the financial and real economy

Due to a continued reliance on fossil fuels to power much of their economies, there is a need for the public as well as private sector to transition to low-carbon energy systems. Labelled bonds present an opportunity to finance transitions that require companies to drastically change their business models.

The US campaign to tackle climate change is being revived through major policy commitments which are poised to send sustainable debt skyward. We hope the US joins the ranks of other sovereign GSS issuers like its close neighbour in the north, a move that's proven to bolster domestic sustainable debt markets and also, demonstrates real climate intent.

Sean Kidney, CEO, Climate Bonds Initiative: “The USA has led national green bond rankings for several years, however, significant upside potential and unmet demand remains, in both the municipal and corporate markets. This demand will only grow as large investors continue to seek sustainable investment opportunities, align towards emissions reduction goals and reduce long-term carbon exposure in their portfolios.”

Be sure to read the report for more detail and analysis and in case you missed the launch event watch it on YouTube here.