What's it all about?

Our recently launched 'Bonds & Climate Change: The State of the Market 2017' carries 10 city-based studies and finds that while on issuance volume US munis continue to lead, having reinforced their climate commitments, the mega cities of tomorrow are making their way onto the scene.

"70% of global greenhouse gas emissions come from cities, and many of

the world’s most populated cities sit on coastlines, rivers and flood plains,

they are particularly vulnerable to negative impacts from a changing climate."

33 of these cities will be located in Africa, South-East Asia and Latin America.

As populations concentrate and cities expand, the impact of poor air quality, flooding and extreme weather events will increasingly threaten these urban areas.

Simultaneously the development of new green infrastructure; the urban transport networks, energy and water systems of these megacities is a critical factor in meeting NDC targets and holding global warming at two degrees as well as achieving various SDG goals and contributing to the wider 2030 Agenda.

In combination with other investment and capital market tools, green bonds can be an effective capital raising tool for municipalities, city governments, energy and water utilities, public-private partnerships, transport groups and private companies.

This point has already been underlined in a plethora of reports and guides, too numerous to mention here. 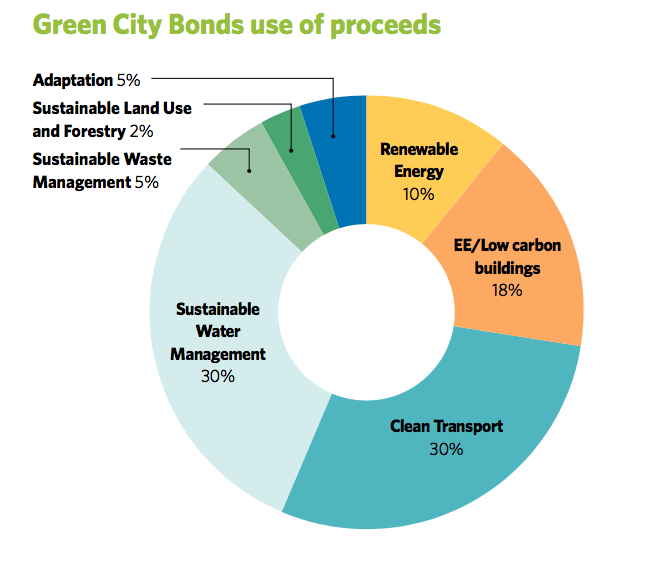 Our State of the Market 2017 report identifies upcoming opportunities for green city bonds and showcases 5 leaders and 5 potential issuers across the globe.

The focus is on expanding issuances from early adopters such as Gothenburg and Cape Town and build new issuance, especially in developing countries.

We summarise some of the report highlights:

The green bond is part of the financing strategy for the City’s climate action plan to reduce emissions by 13% and achieve 10% share of energy from renewable sources by 2020.

Look out for our upcoming Briefing and Webinar on Cape Town’s first green bond.

Lagos is seen as a potential candidate for green bonds issuance, given its presence in the debt market and its development plans.

Because of its unique planning and adaptation challenges, the City could benefit significantly from green bond issuance across a number of sectors, including water treatment and flood resilience projects.

Mexico City’s green city bond is part of its ambitious climate action plan, which aims to cut GHG emissions by 30%.

In Colombia, USD24.7bn worth of green city projects have been identified, with Medellín’s 2016-2019 development plan being a strong candidate for green bond financing.

Asia: The emerging Chinese and Indian markets are still small in green city bonds, but there are promising signs for growth.

Chinese municipalities are not traditionally able to issue bonds, but the establishment of pilot zones for green finance development is allowing selected cities to do so. One of these is Wuhan, where Wuhan Metro has issued two green city bonds to finance and refinance seven metro lines in total.

In India, where the population is projected to overtake China’s by 2050, reviving a muni bond market is high on the Indian government's agenda, with subsidies for issuers being granted under the Smart City Mission.

After a 10-year hiatus, the first muni bond appeared again on the market in 2017. Ten cities are slated to issue muni bonds by the end of the year, paving the way for green city bonds to be issued in the near future.

Mumbai is well-poised to become a green bond issuer in the short-term, given its projected growth rate and dearth of infrastructure projects under development, from waste management to public transit.

Megacities in developing countries should also look to some of their neighbour’s successful financing models for low carbon infrastructure development. In Hong Kong, the Mass Transit Railway (MTR) has been a leading green bond issuer. Its innovative land value capture model has permitted the rail network operator to develop new stations and metro lines by selling or leasing the property around or above the stations.

Similar models have been used elsewhere such as in São Paulo, Brazil, where air right sales for property development have been used to finance public transport, and could usefully be scaled up as megacities grow.

Green city bonds are a way to access low-cost financing for low carbon urban development. This includes the traditional infrastructure projects – urban transit, water and sewage systems, energy efficiency and smart energy solutions. Funding will be increasingly needed to build adequate levels of resilience against future conditions, heat and water supply impacts at one extreme, flooding and storm surge combinations at the other.

It is vital that growing megacities develop infrastructure in line with climate mitigation and adaptation goals, as they are not only the emitters of tomorrow, but also the most vulnerable.

While Superstorm Sandy caused considerable damage in New York, the state and city itself also had deep resources and the insurance coverage to respond.

Insurance as a fall back for large cities against ongoing climate risks or the damage from repeat events may not be so easily accessed in future decades.

SDG Goal 11 relates directly to cities, with many of its targets around transport, water, air quality, climate mitigation and resilience require the very development and infrastructure projects that greenbonds are well suited to fund.

There is also still much to be done to connect NDC targets to climate plans, and pipeline development, project finance and risk bridging by IDBs and MDBs.

Differences in creditworthiness, capacity to manage and domestic policy settings at a city level are all issues needing support and resolution.

Notwithstanding these hurdles, international banks, institutional investors and asset managers are increasingly being called upon to step up green capital investment by 2020.

We are looking to more innovation, development of sound risk sharing and robust investment models to accompany the trillions in investment that global finance can, and must, muster.

A decision to invest in anything is solely yours. The Climate Bonds Initiative accepts no liability of any kind, for any investment an individual or organisation makes, nor for any investment made by third parties on behalf of an individual or organisation, based in whole or in part on any information contained within this, or any other Climate Bonds Initiative public communication.