London/New York 18/09/2017 18:30 BST/13:00 EDT: HSBC and the Climate Bonds Initiative have launched the 6th annual‘Bonds and Climate Change: the State of the Market in 2017’ report at the HSBC Sustainable Finance and Investing Responsibly Briefing in New York, on the first day of Climate Week NYC.

Commissioned by HSBC and produced by the Climate Bonds Initiative, the State of the Market report has become the authoritative international analysis of both the labelled green bond and ‘climate-aligned’ bond universe**. This year’s datasetincludes all Climate-Aligned and Green Bonds issued after 1st January 2005 and before 30th June 2017.

‘Bonds and Climate Change: State of the Market in 2017’ quantifies all bonds where proceeds are being used to finance low carbon and climate resilient infrastructure. In this report, we uncover bonds that finance investments compatible with a 2- degree transition path rather than investments that are marginally environmentally beneficial. This takes a cue from the Paris COP21 Agreement that all investments should be in line with the steep emission reduction trajectory needed to achieve a rapid transition to a sub-2-degree Celsius world.

“The report demonstrates the increasing role of sub sovereigns, and cities in the financing of climate and emissions goals. We need to accelerate sustainable opportunities for long term investment to help meet these goals. More green and climate-aligned bond issuance will improve capital allocation, create market depth and help drive the climate outcomes we are all looking for.”

“We’re making a start on green finance. But banks, corporates and governments have to be working much more closely with cities to fund climate resilient infrastructure. They must increasingly align their investments with country climate plans and build economic resilience to deal with the climate impacts to come. This also means increasing linkages with the UN’s SDGs as a vital part of the transition we face.”

70% of global greenhouse gas emissions come from cities, and many of the world’s most populated cities sit on coastlines, rivers and flood plains. For this reason, they are particularly vulnerable to negative impacts from a changing climate. Bonds are a key tool to finance climate resilient infrastructure in cities.

The city has shown leadership in supporting best practice and potential for future issuance is substantial. New York is a frequent issuer with total issuance since 2012 exceeding $10bn. The planned and current climate infrastructure projects include $1.7bn for subway expansion and $315m for wastewater adaptation.

Lagos is one of the world’s fastest growing megacities, and an economic powerhouse in West Africa. As a waterfront city with aunique set of planning and adaptation challenges, Lagos could benefit significantly from city green bond issuance across a number of sectors, which have been identified as priority areas in the Lagos State Development Plan.

Japan is home to the world’s second largest bond market. In February 2017, the Tokyo Metropolitan Government (TMG) published a ‘Green Bonds Issuance Policy’ as part of a larger constellation of environmental goal setting, establishing a path to a greener city as Tokyo revamps its infrastructure for the 2020 Olympics.

The State of the Market Report is commissioned by the HSBC and is produced on an annual basis by the Climate Bonds Initiative. This is the 6th annual report, and can be downloaded here. Previous reports can be found here.

The dataset of this year’s report is comprised of a universe of $895bn climate-aligned bonds outstanding, made up of 3,493 bonds from 1,128 issuers across seven climate themes: transport, energy, multi-sector, water, buildings and industry, waste and pollution, agriculture and forestry. The dataset includes all climate-aligned and green bonds issued after 1st January 2005 and before 30th June 2017.

**Labelled green bonds: Bonds labelled as ‘green’ by the issuer and are financing green assets and projects and form the basis of green indices.

**Climate-aligned bonds: This label is increasingly used to refer to bonds that are financing green/climate assets that help enable a low carbon economy but have not been labelled as ‘green’ by the issuing entity. 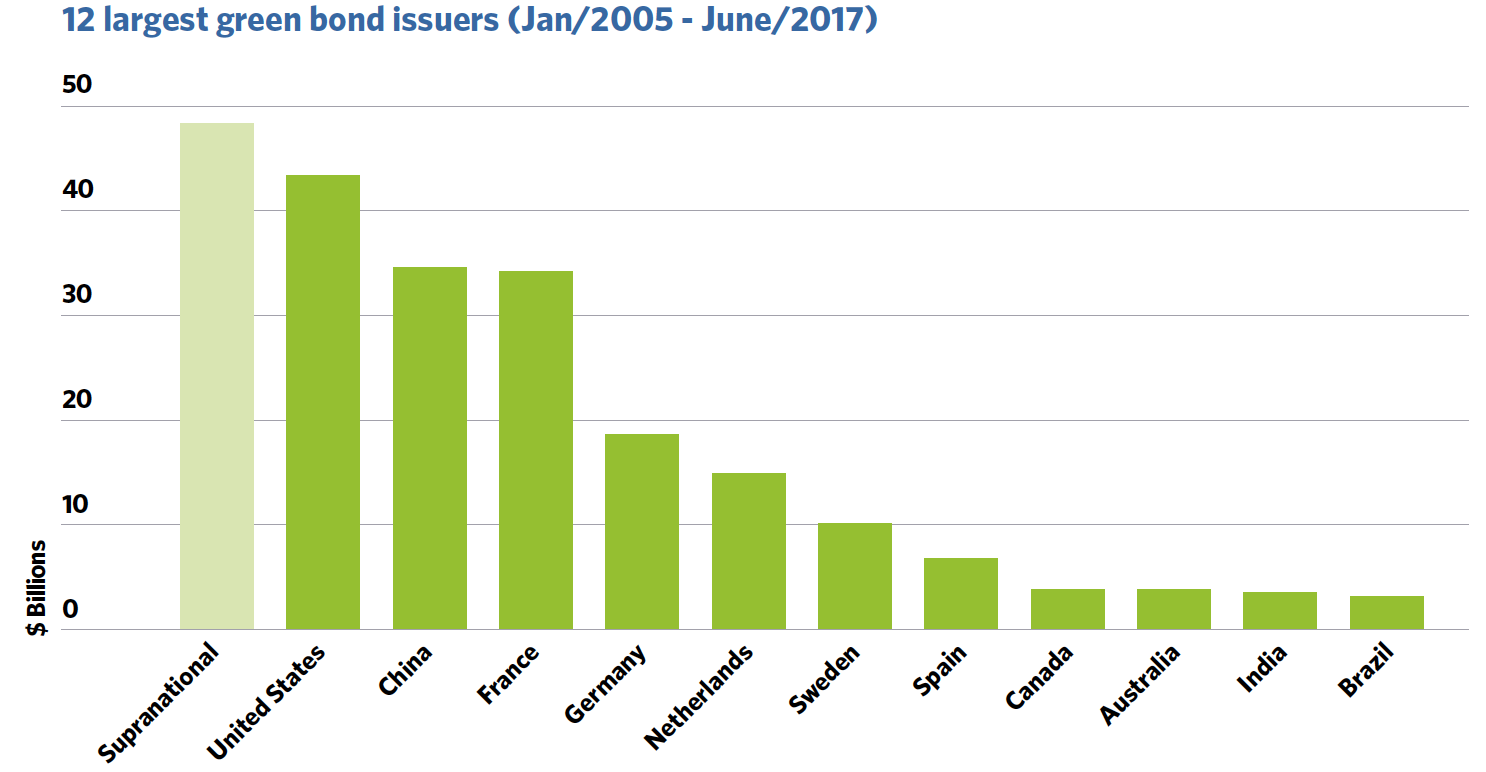 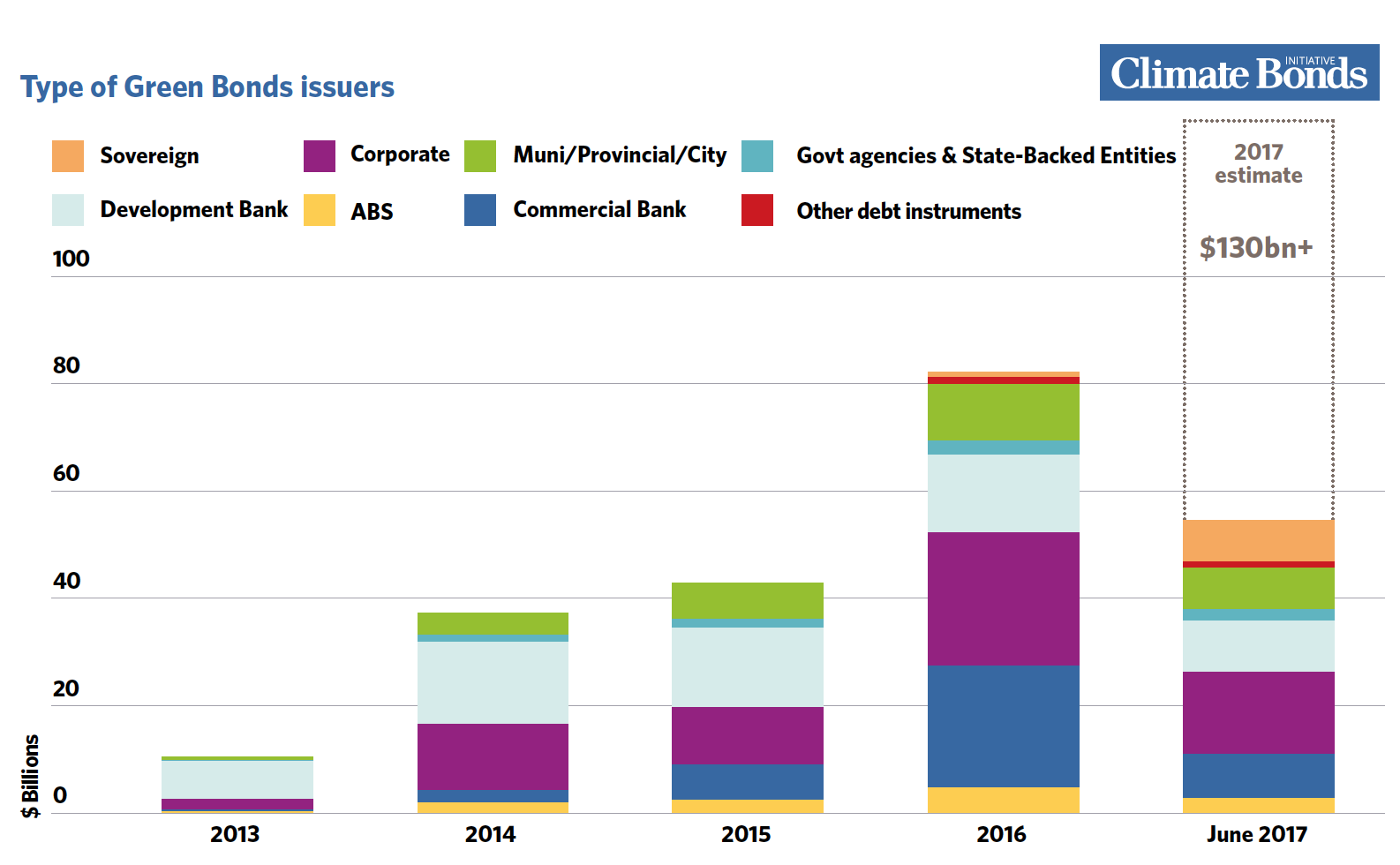 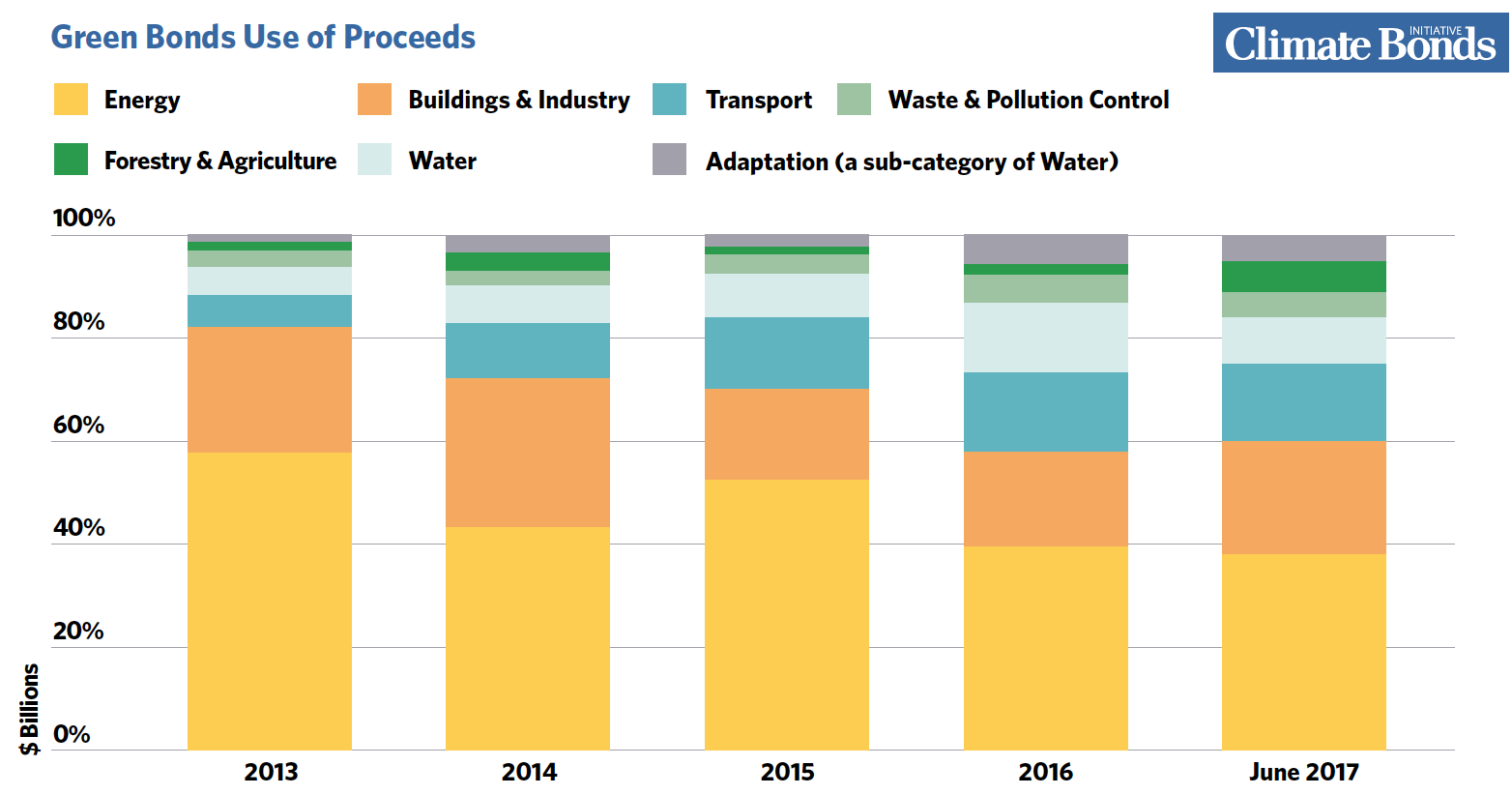 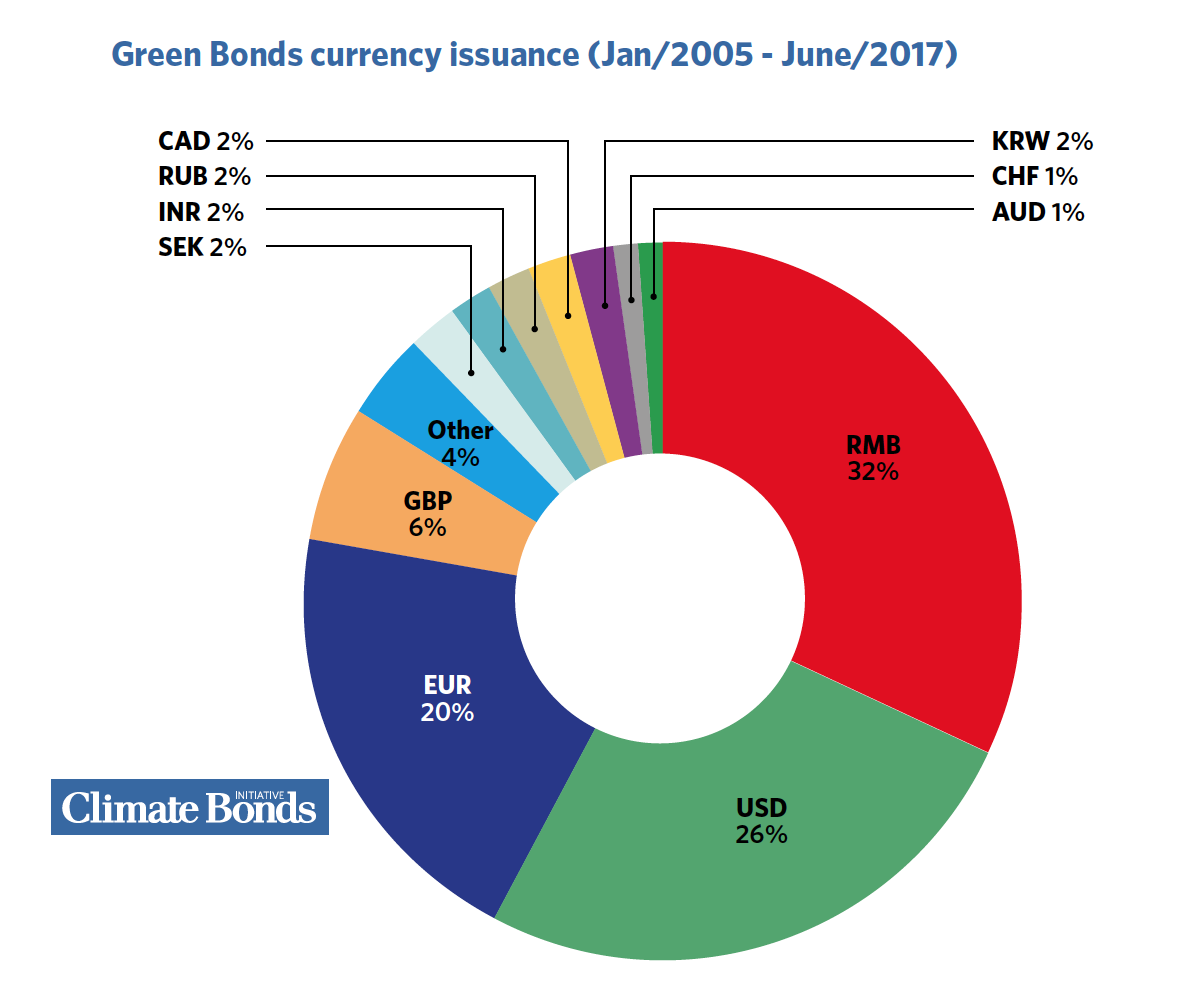 Certification under the Climate Bond Standard only reflects the climate attributes of the use of proceeds of a designated debt instrument. It does not reflect the credit worthiness of the designated debt instrument, nor its compliance with national or international laws.
A decision to invest in anything is solely yours. The Climate Bonds Initiative accepts no liability of any kind, for any investment an individual or organisation makes, nor for any investment made by third parties on behalf of an individual or organisation, based in whole or in part on any information contained within this, or any other Climate Bonds Initiative public communication.