Over the past months, Climate Bonds has been working with our partners at CPI and RMI to create guidelines for credible coal phase out projects in an effort to facilitate the rapid transition to clean energy globally. The draft guidelines are now available for public consultation on RMI’s website here. We welcome your comments and feedback. You can read more about the draft guidelines in the blog below, produced in conjunction with RMI and CPI.

It’s been an exciting few weeks for global energy and coal transition announcements. Two weeks ago, the South Africa Just Energy Transition Investment Plan was released after nearly a year of intensive development. While last week, Indonesia and a coalition of public and private funders, convened through a Just Energy Transition Partnership, announced US$20 billion in committed  support to accelerate Indonesia’s energy and coal transition goals. These announcements, alongside project-specific announcements by the Asian Development Bank (ADB), ACEN, and others, highlight the critical role finance will play in accelerating a transition from coal to clean energy globally.

Indeed, achieving a managed and just coal transition in line with 1.5°C goals will require a significant mobilization of capital. However, financial mechanisms for the coal-to-clean transition (known as coal transition mechanisms, or CTMs) are relatively new and underdeveloped. Reputational risks surrounding coal deals of any kind threaten to dampen momentum behind CTMs, hindering the flow of finance for the global coal transition. Many private financial institutions have set clear policies or finance taxonomies that limit any new investment in coal, further constraining investment in CTMs. Ensuring environmental and social integrity is critical to address the real and perceived risks of CTMs. Climate Bonds Initiative (CBI), Climate Policy Initiative (CPI), and RMI have developed clear guidelines to help funders and coal plant owners navigate the possible pitfalls.

We propose that CTMs can deliver a credible coal transition that results in positive climate and social outcomes. Here’s how.

The Road Since Glasgow: A Growing Role for Finance in the Coal-to-Clean Transition

Since COP26, which marked the first time “phasing down” unabated coal was included in an international climate agreement, we’ve witnessed an exciting shift from coal commitments to implementation. CTMs, or financing mechanisms that aim to accelerate the transition of existing coal plants, have played a major role in translating ambition into action.

In the Philippines, utility ACEN recently approved a deal to sell its remaining coal plant for retirement on an accelerated timeline. Indonesia’s utility agreed to a similar structure for one of its plants. And just last week, donor countries and the Government of Indonesia announced a major financing package to drive a coal transition in the country, where coal provides over 60 percent of electricity generation today.

While market forces will continue to push out existing coal in competitive markets, 93 percent of coal capacity remains shielded from market pressure by electricity regulation or long-term contracts. Financial tools offer a way to accelerate the closure of these plants in a way that expands financing sources for energy transition efforts and helps preserve the economic, regulatory, and financial stability that is likely crucial for achieving long-term climate goals.

Though we’ve seen a few pilot deals move forward, by and large, CTMs remain relatively unexplored territory. In addition to the financial risks CTMs face as innovative transition finance approaches, they also carry reputational risks that, left unaddressed, could make financial institutions wary to engage in deals. Even if they result in emissions savings, on the surface CTMs look like instruments that finance coal plant owners. This challenge is magnified if CTMs fail to deliver emissions savings or undermine long-term climate goals, or if they do not ensure protection for workers and communities that may be negatively impacted by a coal transition (see key challenges in exhibit below).

The Way Forward: A Framework for Credible Coal Transition Financing

CBI, CPI, and RMI developed a set of initial guidelines to help navigate these reputational risks (see exhibit below). These guidelines provide a framework to mitigate the largest risks of CTMs, demonstrate positive outcomes, and drive the transparency needed to inform financial institutions’ decisions on whether to engage in a transaction.

The guidelines provide recommendations across critical issues to ensure transactions:

While these guidelines put forward a set of minimum recommendations for CTM credibility, we expect the guidelines to evolve with CTM experience, stakeholder needs, and climate ambition. We approached this work with a view that enabling positive transactions can go a long way in creating the necessary proof points and demonstrating that capital can be mobilized for the coal transition. As these proof points are established, many of the guidelines will need to ratchet up their ambition to ultimately support achievement of 1.5°C temperature goals. Credible financial mechanisms can build momentum behind the coal-to-clean transition, ensuring that we have many more exciting announcements to look forward to in the global effort to phase out coal. 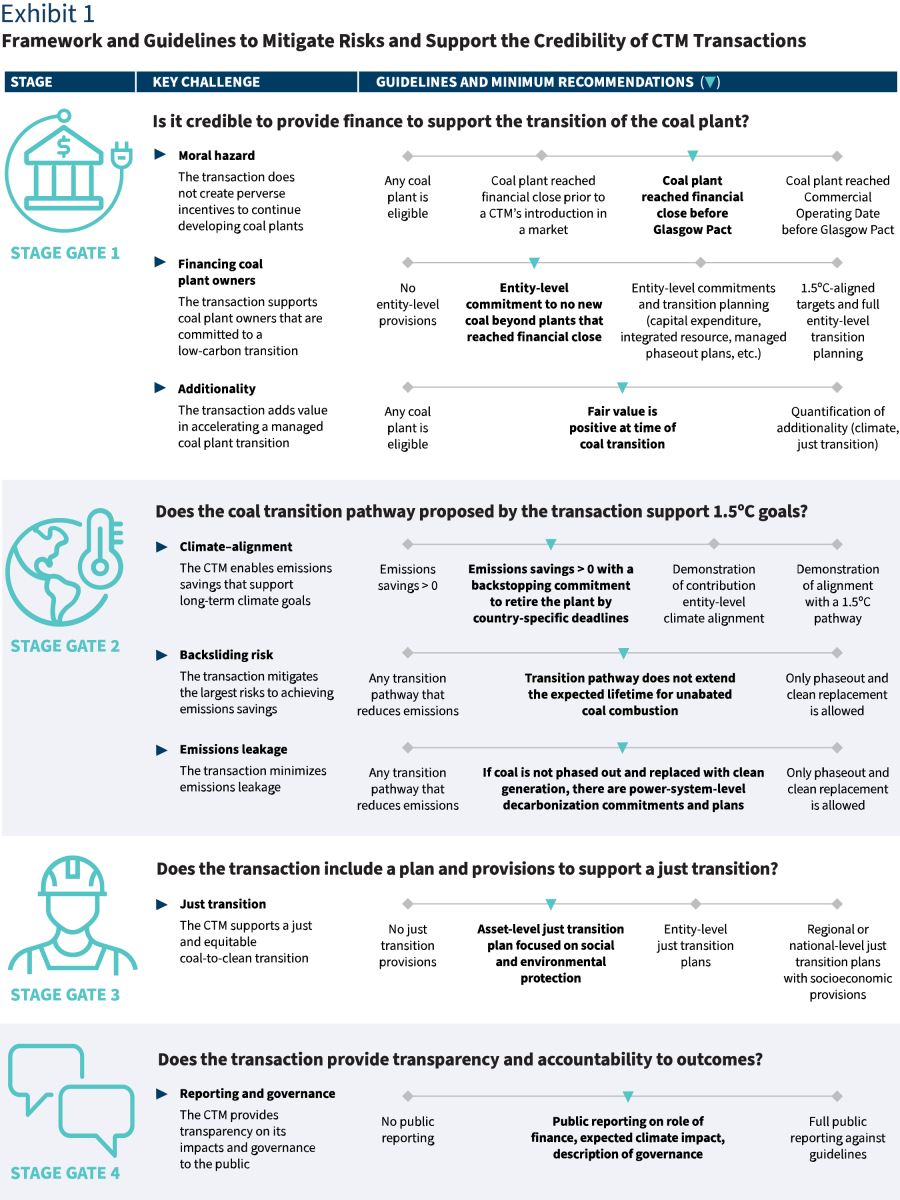