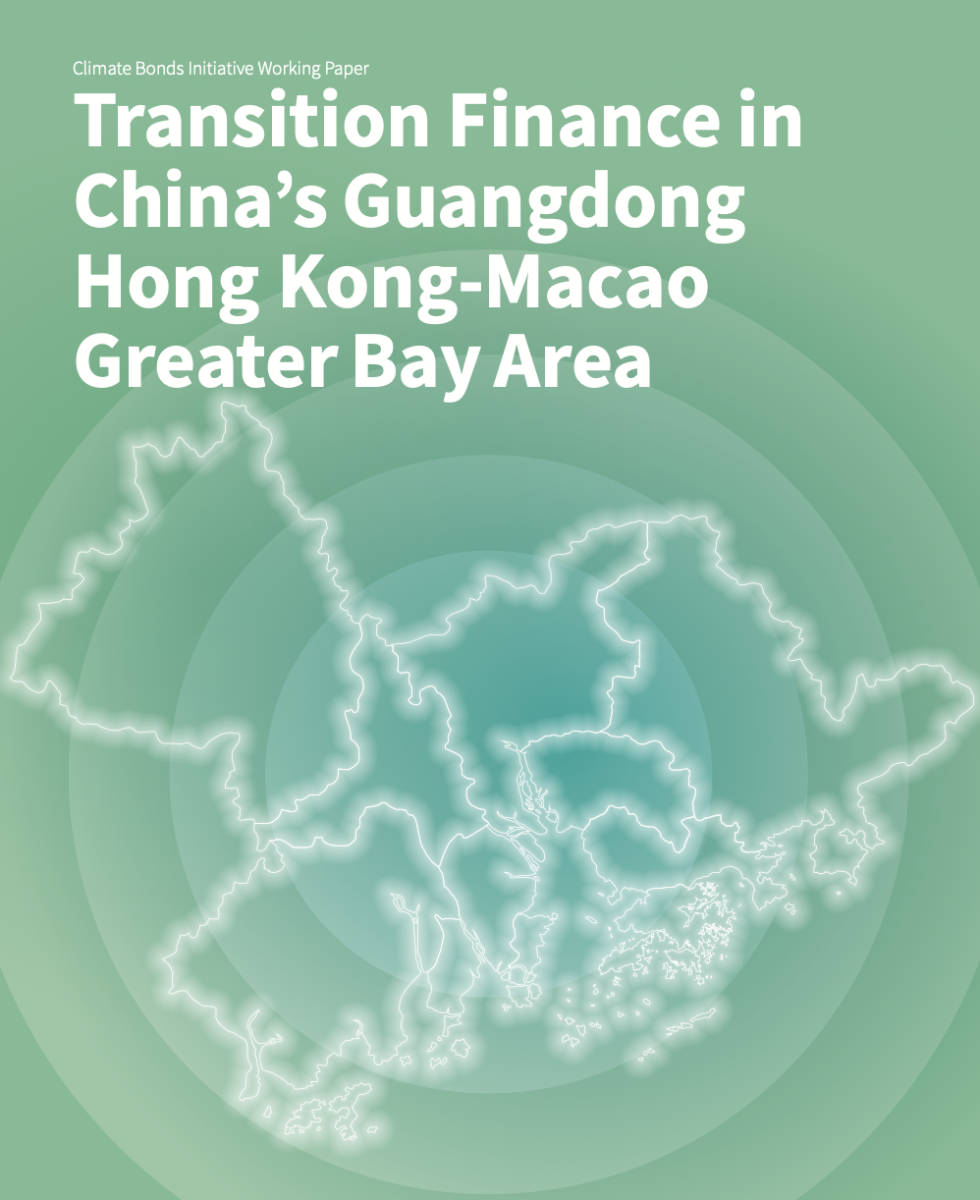 But what do we mean by Transition Finance? What does it take to finance credible green transition?

The release of the Sixth Assessment Report of the Intergovernmental Panel on Climate Change (IPCC) has sounded like a warning to the world. It is now an imperative for all countries to jointly face the climate crisis, enhance climate resilience, and strengthen mitigation actions. To stay within 2 degrees of temperature rise, it is not enough to support the development of green and low-carbon industries alone. Ensuring the rapid transition of high-GHG emitting sectors and so-called hard-to-abate sector is an essential component of facilitating a low carbon economy.

With the objective to present a framework for defining ambitious and credible transition pathways for companies, the Climate Bonds Initiative and Credit Suisse published in September 2020 the Financing Credible Transitions paper. The study has been perceived as an important document to support the rapid growth of a transition bond market, as it proposes a unifying definition of ‘transition’, addressing investor concerns around greenwashing. A year later, the Transition Finance for Transforming Companies, was launched to present Climate Bonds’ proposal of the five hallmarks of a credibly transitioning company. We highly recommend the reading of both reports.

Following up on the previous studies, this report provides some definitional underpinnings of ‘transition’ for the Guangdong Hong Kong-Macau Greater Bay Area. But first, let’s remember:

·      Transition means change over time: it is a journey, not a destination;

·      Transition can encompass interim activities along with long-term activities;

What you should know about Transition Taxonomy

Currently, the transition taxonomy is being discussed and proposed as a tool specifically for high-carbon emission entities and sectors to help their transition. In doing so, a transition taxonomy could also outline a clear and time-based pathway to achieve the alignment with the Paris Agreement.

It’s known that both green and the proposed transition taxonomies have a common goal – they can be seen as subsets of the broader sustainable finance taxonomy. However, the report proposes a useful distinction to be made between the two frameworks. The value of a separate transition taxonomy is that it can focus on activities of which the starting points are further away and the journeys to reach net zero are either unclear or have significant hurdles to overcome.

The report proposes that a climate transition taxonomy should be defined as “a classification system for high-GHG emissions activities and sectors to reach alignment with the Paris Agreement (net-zero) in the time frame required by climate science”.

Combing through existing research on transition finance, the report reveals:

·      The term ‘transition’ can be applied to whole entities or their individual activities;

·      The fields which financial service institutions focus on demonstrate a high level of consistency. The difference lies in the order and progress of the relevant standards and research in the key fields, as well as the differences in the specific technology choices among them.

The sectors and activities critical to the low-carbon transition in the GBA includes Electricity, Industry, Transportation, Building, and Information, Communication, and Technology.

This is one of the regions with the highest level of openness and the strongest economic vitality in the country. In the context of a global response to climate change and China’s goal to peak emissions in 2030 and to reach carbon neutrality in 2060, the development positioning of the GBA determines that it is expected to boost high-quality economic growth, while considering the environment and sustainable development.

Since the Huadu District of Guangzhou City took the lead in launching the pilot zone for green finance reform and innovation in 2017, the GBA has gained considerable experience and achievements in promoting green finance. The GBA Outline Plan emphasised the target of constituting a green financial centre in the bay area, as well as varied development plans for Hong Kong, Guangzhou, Macau and Shenzhen. The unique advantages due to the perfect location of the bay area, as well as years of green finance development experience, the GBA has turned into an ideal place to develop transition finance and explore relevant policies, standards and tools.

As one of the most economically developed regions in China, the huge production and residential demands have resulted in an extremely high demand on energy in the GBA. In 2017, the comprehensive energy consumption was about 239 million tons of standard coal. Demand for energy was made up of 32% for industrial use and accounted for 31% in transportation energy. Geographically, Guangzhou, Dongguan, and Hong Kong were the major energy consuming cities. 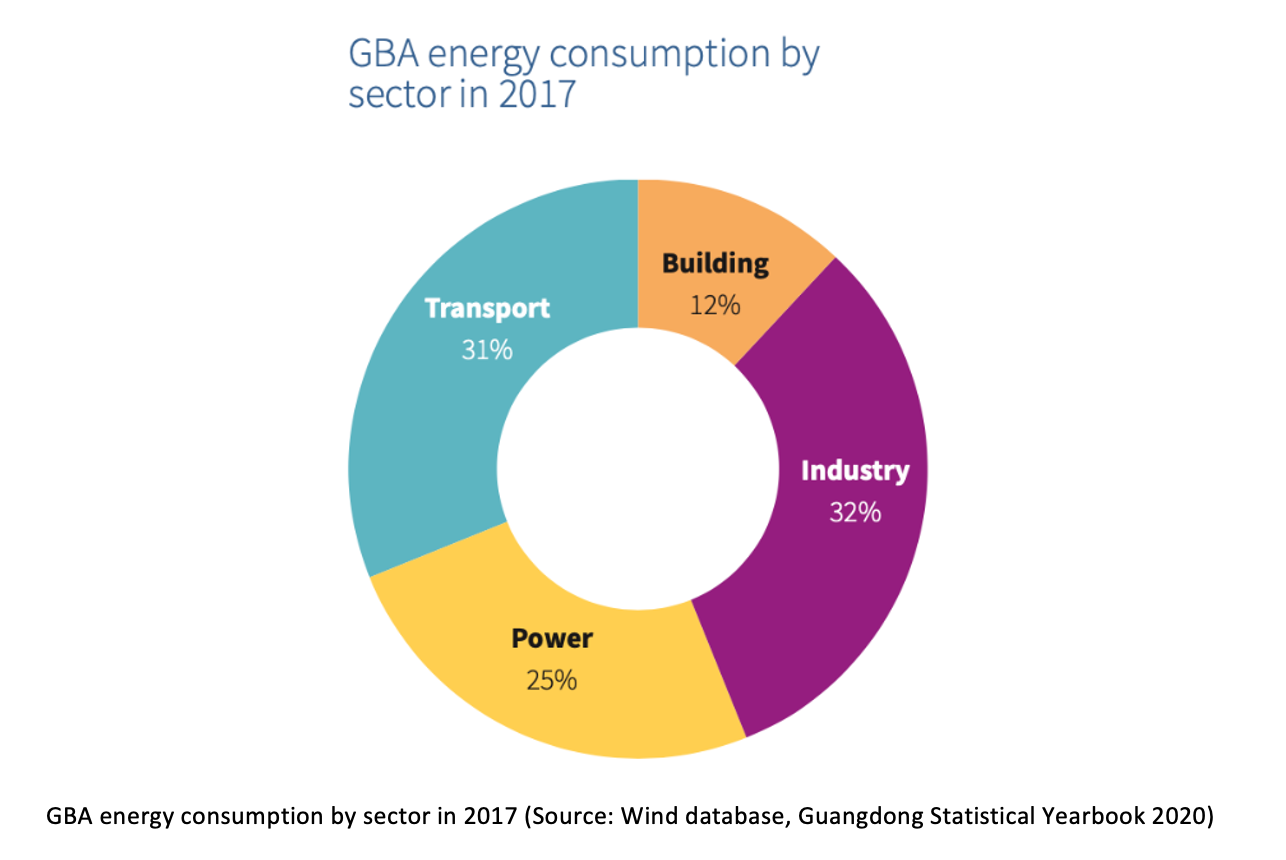 To further stimulate the development of transition finance in China and the world, the report proposes the following recommendations:

l  Research institutions can support industry to formulate and refine a granular and scientific transition pathway, and companies can use this as a basis to understand and make transition plans.

l  Transition finance can learn from the current green finance mechanisms and tools, and innovate in the selection of paths and objectives to ensure credible transition.

Addressing climate change is one of the most pressing global issues of our time. While vigorously developing green industries, it is now of crucial urgency to facilitate the transition of high-carbon industries to low-carbon business models.

Transition finance has emerged to fill this gap. As an important national strategy, the GBA has a solid foundation and practical experience in economic development, industrial upgrading, and green finance. These factors make GBA an ideal test field for the implementation of transition finance. Meanwhile, transition finance provides strong foundation for the formation of a world- class green bay area metropolitan cluster.

Through a series of transition reports, CBI plans to lay the groundwork for its upcoming “China Transition Programme”, whereby ambitious, accelerated decarbonisation of the industrial sector and the phasing out of the coal industry will be supported by the financial sector with robust and credible guidance. Stay tuned!