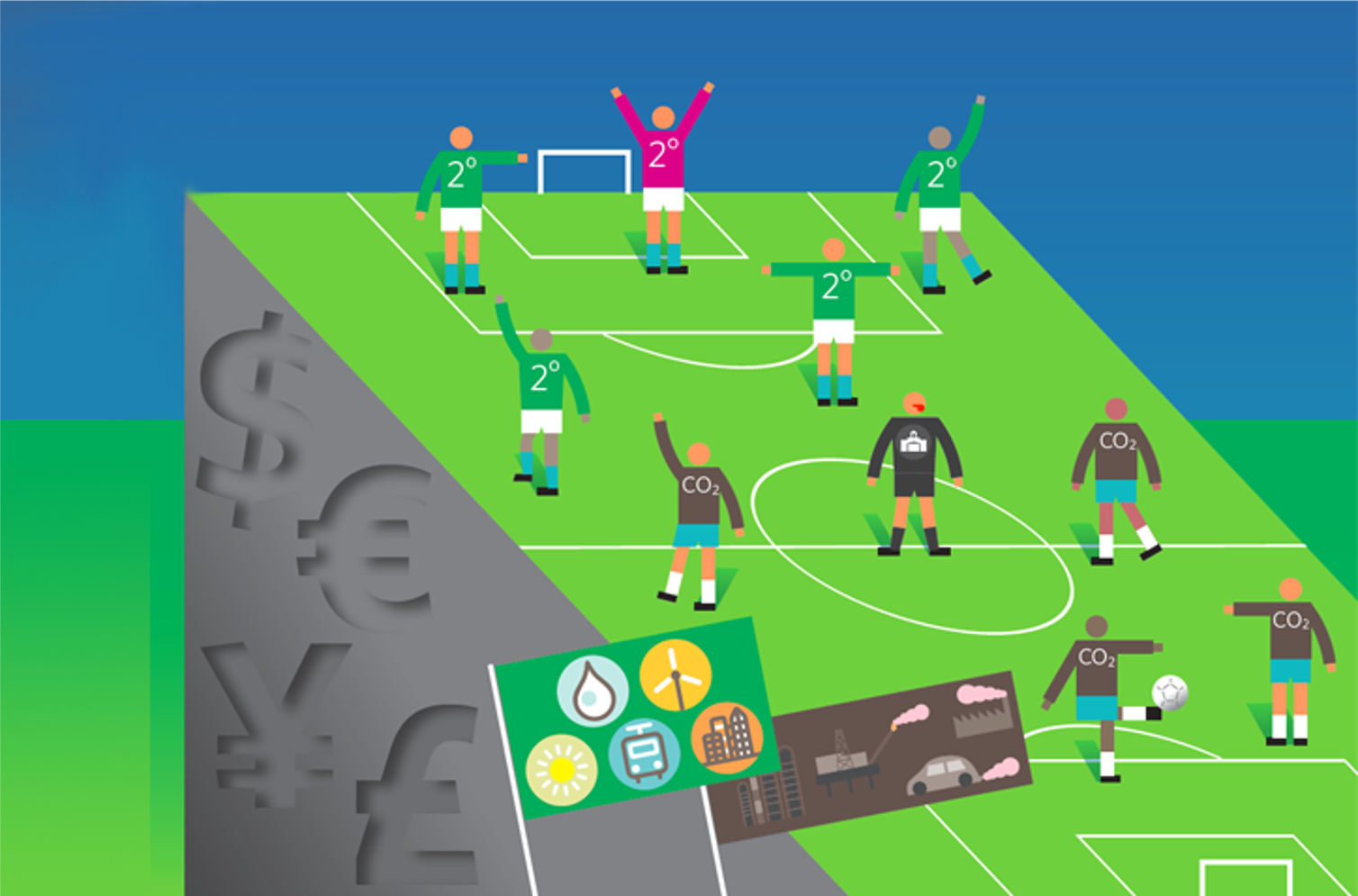 Members of the green central bank network - NGFS - had a busy first week of June organising the Green Swan conference 2-4th June and publishing the revised climate scenarios on 7th June. There are now 90 members of the NGFS, with the US Fed one of the most recent to join.

At the conference, heads of the central banks of the US, China, Eurozone and France (which hosts the NGFS secretariat) shared a platform and debated the commonalities and differences between their approaches to greening the financial system.

There was unanimity that better quality data is needed to understand climate risk exposures. But who this data is disclosed to, and who chooses what is disclosed is still up for discussion.

Jay Powell, Chair of the Federal Reserve, was the most cautious: “[The Fed] accepts the foundational need for better and uniform data on disclosures” but put the onus on the White House and SEC as the regulator to determine the mechanisms for standardising and increasing the uptake of a voluntary TCFD framework.

At the other extreme, ECB President Christine Lagarde argued that business-led initiatives like TCFD disclosures were too “light touch” and she would prefer the co-development of a mandatory framework with financial institutions. The EU has introduced regulations — the SFRD (Sustainable Finance Reporting Directive) and CSRD (Corporate Sustainability Reporting Directive) — for financial and non-financial company disclosures respectively, putting disclosure on a mandatory footing. The Chinese also plan to do so in 2025.

The EU and China are moving together to develop common ground on a taxonomy later this year (full disclosure: Climate Bonds is supporting this work). Now that fossil fuel power generation has been removed from China’s green catalogue, the taxonomies are “80 per cent similar” according to PBoC governor Yi Gang. Hong Kong’s Monetary Authority has already indicated it will be using the new common ground taxonomy, when available.

PBoC is ahead of other major central banks in establishing a range of incentives for green lending. Lending for green loans is given greater points in banks’ macro-prudential assessment. To date, PBoC has not published many details about the impact of this initiative. It is also trying to assess the green and brown assets of commercial banks and in the future may consider risk weighting based on the greenness of the assets.

The other area of significant activity is climate stress testing undertaken as part of the prudential regulation toolkit. Banque de France, the Monetary Authority of Singapore and the Bank of England have already, or plan, to ask banks and insurers to use scenario analysis to understand physical and transitional risks on their assets. (The UK set out its delayed Biennial Exploratory Scenario, on 8 June using the freshly minted NGFS net-zero scenarios, and most of the UK’s big banks and insurers will be participating in the exercise.)

The Fed is still undecided but recognises such analysis can be a key tool in raising awareness and communicating climate risks within financial institutions. The ECB has published the preliminary results of its stress tests. Christine Lagarde spoke about the scale of the effort needed for these, which involved simulating the impacts of different scenarios on four million corporate accounts on 1600 banks and insurers over a 30-year time horizon.

Earlier in the conference, the Bundesbank adopted a conciliatory stance to incorporating climate risks into Eurozone management. President Weidmann said, “That is why I have recommended that in the future the Eurosystem should only purchase securities, or accept them as collateral, if the issuers meet certain climate-related reporting obligations.” This is a critical development. This will now allow a green screen to the ECB’s substantial corporate bond purchase programme and collateral framework.

Could central banks be sued?

NGFS chair, Frank Elderson, raised the prospect of central banks risking litigation if they failed to use their toolkits to manage the systemic risks from climate. Already ClientEarth is litigating in Belgium and the NGO hopes to raise the issue to the European Court of Justice.

"While central banks and supervisors should of course not overstep their mandate, there is also a legal risk of being sued for failing to act and comply with legal obligations. In recent years, we have observed a steep increase in climate-related and environmental litigation, which has more often than before been successful," Elderson remarked in his keynote address.

The conference also hosted a session dedicated to the financial risks arising from the loss of nature and biodiversity coinciding with the launch of the Taskforce on Nature-related Financial Disclosures (TNFD), which has already received G7 backing.

On 8 June, the NGFS launched the second version of its climate scenarios. These are intended to provide supervisors running stress tests on banks or insurers with a uniform and comparable set of scenarios looking 30-years ahead in terms of climate mitigation policies and unfolding physical risks. The scenarios have been developed by international experts[i] that integrate climate, energy technology, land-use and economic models to provide six integrated scenarios for assessing how well bank balance sheets hold-up when dipped into climate chaos.

The ‘equivalent carbon tax’ (through regulations, trading schemes, fossil fuel subsidy removals) as well as taxes needed to hit net-zero before 2050 is an eye-watering $700-$800/tCO2 by 2050 (the global average in 2019 was around $20/tCO2) and EU-ETS price is currently around $50/tCO2. This is a stark reminder of how far away the current climate mitigation policies are from decarbonising our economies.

The main changes to the scenarios, since the first version issued a year ago, is the addition of a net-zero trajectory, an increase in the number of variables being output for each scenario, and the use of clever algorithms to disaggregate the outputs of the seven regions to individual countries.

The net-zero scenarios impose a strong set of greenhouse gas mitigating policies to rapidly reduce emissions. This work falls hot on the heels of the IEA net-zero scenarios released a few weeks earlier. NGFS modellers are also downbeat about the potential for carbon removal. This measure accounts for around 8MtCO2 reduction by 2050 – a fifth of current emissions. The heavy lifting in terms of emissions reduction is through increased electrification and high renewables penetration. Solar and wind together provide around 70 per cent of electricity generation by 2050, gas with CCS, nuclear and other renewables provide the balance.

One of the most interesting diagrams in the report is a depiction of risk factor pathways. These set out the emissions trajectories for different sectors if the economy as a whole decarbonises by 2050. An example of the results is shown below. 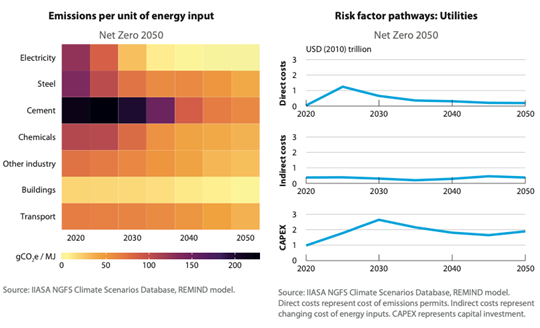 The scenarios are a tremendous intellectual achievement, in conjunction with the IEA’s assesments, they will set the tone for a great deal of the modelling efforts over the next year or two. But there is a question about the amount of effort that emerging market financial institutions will need to expend applying the scenarios to their loan books. The scenarios would seem to be feasible for larger financial institutions in OECD countries to use. But is it the right tool in countries that primarily face physical risk, especially acute risks, which are the least well developed in the scenarios?

Even if the scenarios are successfully modelled and financial institutions' high degree of exposure to climate-risks is laid bare (a big if), a question remains over how crucial this information will be in redirecting finance. In this area, Jerome Powell is surely right in saying that responsibility for further action lies with governments.

Under the current policy scenario, we are likely to exhaust our carbon budget in 10 years. So it’s important for all actors to move now, rather than wait for more and better data about unknowable unknowns. Acting now is one of the central messages to institutional investors from the climate-forecasting consortium the Inevitable Policy Response.

What is needed are taxonomies to help identify the investments we want and those we would wish to exclude. To safely cross the road, one doesn’t need to know the location of every vehicle in the city and compute which is going to hit you. One simply needs to find the zebra crossing.

Stay tuned for more policy coverage in the countdown to COP26.

Click here to join the conversation on green infrastructure investment opportunities in the Greater Bay Area!