The first issuer from Latin America and the Caribbean (LAC) entered the market in 2014. LAC issuers have contributed 2% of global green bond issuance volume (1% of bonds and 5% of issuers) through 2 July 2019. Brazil alone accounts for 41% of issuance.

Other key findings of the report 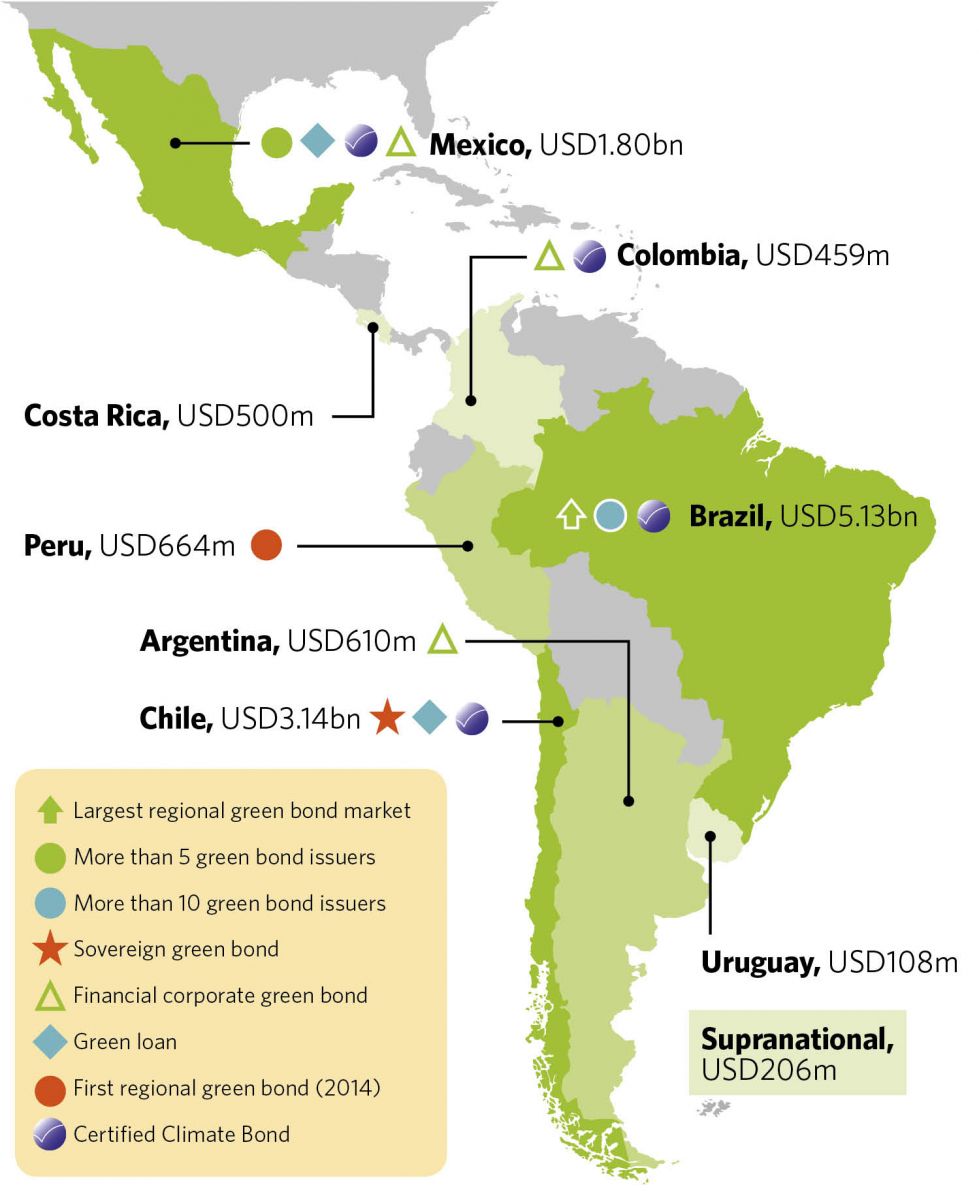 A few more deals have closed since then, already making 2019 a record year with USD4.6bn as of 20 September, bringing total LAC issuance to date to USD13.6bn.

Still, only 9 of LAC’s 33 countries have seen green bonds issued so far, including the recently Certified Climate Bond from Barbados' first green bond issuer (included after the cut-off date).

Brazil is the largest market for labelled green bonds, followed by Chile and Mexico.

There are significant differences in issuer types between countries: Brazil is dominated by non-financial corporates, Chile by the sovereign deals, Mexico by development banks, and Argentina by local governments.

More diversity would be a welcome development. Peru and Colombia have already indicated potential sovereign deals. In a scoping exercise for public sector issuers, we identified the highest potential for green bond issuance among Mexican entities, but we expect continued issuance from existing issuers. We also identified potential in the Caribbean, e.g. in Trinidad and Tobago.

Over 80% of issuance is in hard currency, mainly USD, but this again varies by country. In some markets local currencies dominate, e.g. all deals from Colombian issuers are denominated in COP.

There is a high share of private placements compared to other regions. Many have been issued by local financial institutions and/or are supported by development banks.

Similar to other markets, Energy allocations are high. However, Land use and Industry represent a relatively high share compared to the global market, while Buildings and Water have a lower share.

Driven by Brazilian and Chilean issuers, Water is the largest sector financed by unlabelled climate-aligned issuance, ahead of Energy.

Looking closer at issuance to date

Following a weak 2018 due to the global slowdown in bond issuance and regional factors, green bond issuance from LAC issuers has picked up pace significantly in 2019. Chile’s two recent green sovereign deals, totalling USD2.4bn, made the country the first in LAC and 12th globally to issue a green sovereign. They contributed 19% of LAC’s total volume to date. 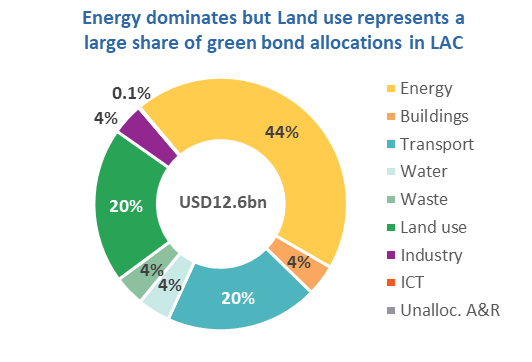 More interestingly, Land use and Industry – two significantly under-funded sectors globally – represent almost a quarter of LAC issuance. Land use industries contribute heavily to the region’s GDP. However, despite most of this stemming from agriculture, the sector represents a very small share of Land use projects financed by green bonds. The majority consists of certified forestry and paper, especially from Brazil.

We expect LAC’s GB market to expand considerably, in large part to fund the region’s infrastructure gap. With a few new deals since the cut-off date for this report, mostly from Brazil, 2019 has already surpassed 2017 as LAC’s record year. COP 25, to be hosted later this year by Chile, could also catalyse this growth.

The development of LAC’s capital markets presents substantial opportunities to scale up investment in green projects. This is urgently needed. In cities, low carbon transport and sustainable water and waste management projects are required. Mexico City, for example, has invested heavily in these areas, with medium- to long-term programmes such as the Green Plan (Plan Verde) and Climate Change Action Plan (Programa de Acción Climática) aimed at greening the city.

Part of future issuance may come from companies that already operate in climate-aligned sectors such as sustainable water management, renewable energy, rail and public transport. This represents an important opportunity for local issuers to support the growth of LAC’s green bond market via labelled issuance. We identified 30 climate-aligned issuers with USD12bn of outstanding bonds from Brazil, Chile, Colombia, Mexico and Argentina.

Further, a spotlight on public sector entities has highlighted examples of issuers which could also be entrants in the market, if their climate-aligned assets are sizeable enough to be (re)financed via a labelled green debt instrument.

More issuance from sovereigns and financial corporates could boost the market, especially if combined with supportive policy and further stock exchange initiatives. The introduction of climate policies and related initiatives has grown rapidly in LAC in the last two years. Governments and industry groups are increasingly aware of the urgent need to invest in green infrastructure and promote sustainable development, and are becoming more active.

However, in order for countries’ NDCs and other climate goals to be met, green finance needs to scale up significantly. Much more needs to be done on the policy front to achieve this, especially considering the significant differences by country. Governments should be bold in encouraging investments in green projects. The market’s development can also be supported by development banks, for example as “anchor investors” for local issuers and by creating credit enhancement mechanisms and setting up specialised funds.

In addition, increased engagement of the wider banking and finance sector in green bond issuance is crucial. A number of promising initiatives, such as Brazil’s Green Finance Initiative and Mexico’s CCFC, already exist in this space and can be developed further.

Finally, we expect greater transparency and better visibility to support the market, for example through a green bond platform providing aggregated information, possibly even including standardised reporting by issuers.

Acknowledgements: The Latin America & Caribbean: green finance state of the market report is sponsored by United Nations Development Programme (UNDP) through the Partnership for Action on Green Economy, and by the Inter-American Development Bank and IDB Invest.