The “Green Bond Pricing in the Primary Market” report, marking the period July-December 2018 is now available.

The report monitors the performance of 24 EUR and 10 USD denominated benchmark size green bonds with a total value of USD29bn issued during H2 2018.

For this report 24 EUR (to the value of USD21.5bn) and 10 USD (to the value of USD7.5bn) labelled green bonds issued in H2 2018 were analysed, with 18 out of 34 bonds from repeat issuers. Among the 16 debut issuers were the Republic of Ireland, Société du Grand Paris, Terna, and Royal Schiphol Group. Emerging Market bonds from Korea Hydro, Chengdu Nuclear, and State Bank of India also met the criteria for inclusion in the analysis.

The total data pool comprised 33% of the USD89bn of green bonds issued in line with the Climate Bonds Taxonomy during the second half of 2018.

This is the 7th iteration in a long-term analytical series by Climate Bonds, supported by International Finance Corporation (IFC), commencing with Q4 2016 Snapshot released in early 2017.

“Green Bond Pricing in the Primary Market” includes a special EM section looking at China and guest commentary by Jason Mortimer, Senior Portfolio Manager at Nomura AM, Tokyo, discussing the concepts around ‘greenium.’ 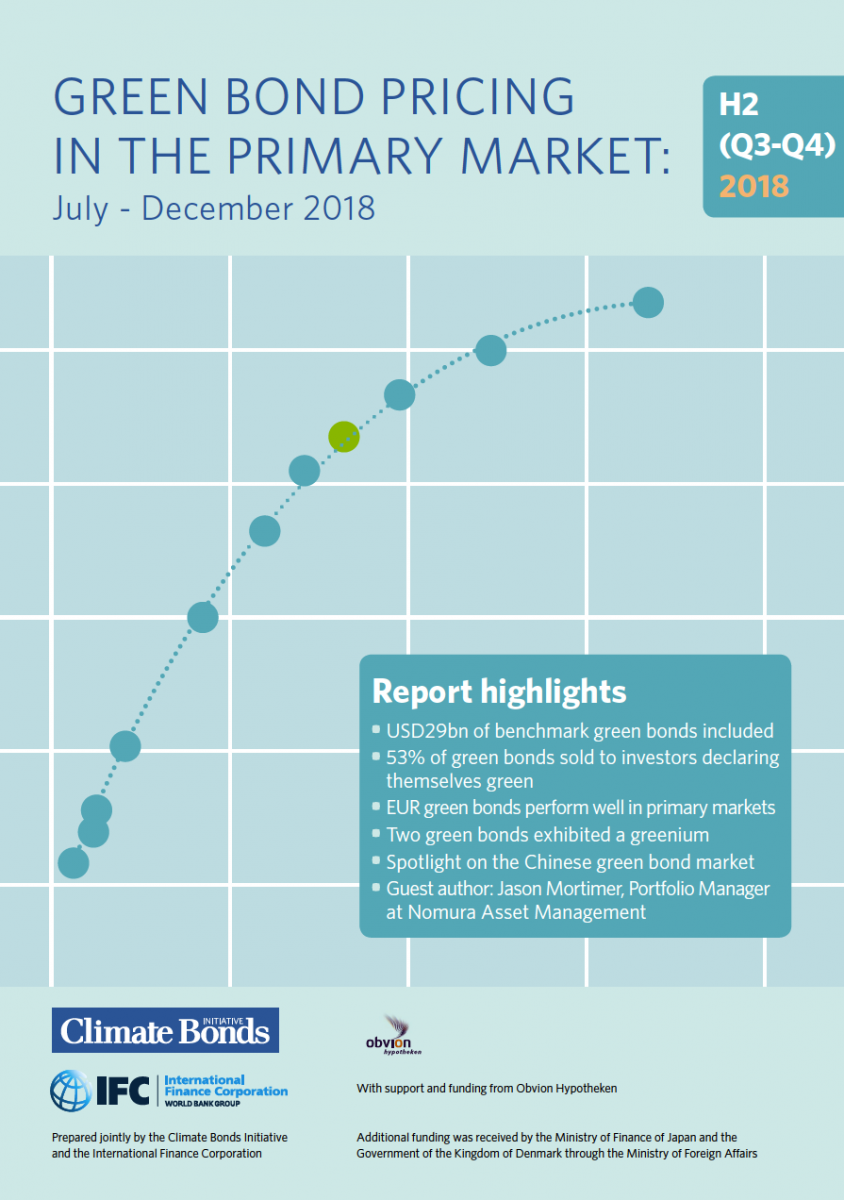 “Green bonds will play a vital role in mobilising the capital needed to confront climate change. This joint research with CBI adds to the body of evidence about green bond pricing and shows that issuers and investors continue to see the benefits of green bonds. IFC supports the sector through advisory services and investments, work with regulators, and technical assistance programmes.”

“The latest report reflects the continued investor appetite for quality green product in the market. We expect this demand to increase as investors increasingly seek to hedge climate risks and look for opportunity. For issuers, structural pressure to accelerate transition will come from processes like TCFD and the wider impact of the Climate Action 100 and other engagement initiatives.”

“As annual issuance in the early 2020s grows towards that critical first trillion, pricing signals will multiply form the initial examples we’ve seen in this and preceding reports.”

This is unusual for USD green bonds, which historically, have performed better than vanilla equivalents during the book building process and may be due to the small number of vanilla bonds suitable for comparison.

Green bonds appear to have performed well compared to matched indices after both 7 and 28 days. When compared to baskets of vanilla bonds, more green bonds are tighter 7 days after pricing, but less than half have tightened by more than vanilla bonds after 28 days. Fewer USD green bonds performed better than their matched baskets in the secondary market, which is consistent with our past observations.

Green bonds attract a range of investors, but on average, 53% of green bonds in our sample were allocated to investors describing themselves as green.

USD green bonds had lower participation compared to EUR but were supported by all types of investors. We reiterate that green bonds are included in all broad market indices, and therefore, most investors have no reason to avoid green bonds.

Climate Bonds built yield curves for 21 out of 34 issuers. Two bonds exhibited a greenium: Terna Elettrica 2023, and EIB 2026, both EUR. EIB 2026 priced off its secondary market green curve, which sits inside the vanilla curve.

Green bond issuers highlight many benefits of issuing green bonds. The enhanced disclosures and monitoring required from green bonds can bring improved transparency which is attractive to investors, and all types of stakeholders.

China is the largest emerging markets (EM) issuer in the green bond market and has the world’s third largest onshore bond market. It can be difficult for green bond investors to find suitable opportunities in EM and most green bonds issued from China are issued in Renminbi (CNY) which we do not capture in our pricing work to-date.

In the EM section the report examines some of the features and highlights the opportunities for offshore investors to gain exposure to this rapidly growing investment space via qualified investor schemes, Bond Connect, or directly via the China Interbank Bond Market (CBIM).

Jason Mortimer is a senior portfolio manager at Nomura AM, Tokyo. Jason explores whether green bonds can deliver superior returns, and offer protection from downside risks, and whether this could justify the notion of a ‘greenium.’

Acknowledgements: Green bond pricing in the primary market January-June 2018 was prepared jointly by the Climate Bonds Initiative and the International Finance Corporation (IFC).

Support and funding were provided by Impax World Mutual Funds and Obvion Hypotheken. Additional funding was received from the Ministry of Finance of Japan and the Government of the Kingdom of Denmark through the Ministry of Foreign Affairs.

Previous reports can be found here.