Skip to main content
North America stands at a USD311bn growing at 76%, what's the state of the market? Hear all about it on 13th July, register now!
Out now our Sustainable Debt Global State of the Market 2020, Climate Bonds flagship report.
Record year for Green, Social and Sustainability Debt Issuance in ASEAN in 2020, read our latest report.
2020 Marked $1Trillion in Global Cumulative Green Issuance: read a complete breakdown of the green bond market since inception.
New! Post Issuance Reporting 2021 brings you issuers' reporting practices on UoP & enviro-impact metrics. Read our full post.
Sovereign Green, Social & Sustainability Bonds Survey is released, reporting on the experience of the sovereign issuance
Climate-aligned investment mounts to $913bn, our latest report uncovers these opportunities.
Groundbreaking ‘Financing Credible Transitions’ Paper lays out Entity & Activity based approaches for Transition Finance Labels.
Conference21 is back on! The 2030 Green Window: Framing a sustainable future, from 6-10th Sep, find out more...
We are back with our latest Pricing Report reflecting on the whirlwind of 2020 & the German Bund & more greenium!
2020 ends with record $269.5bn green issuance, here is our full analysis.
EU leads the drive on furthering sustainable finance, watch the full series of Practical Briefings on the EU Taxonomy.
New Criteria for Sustainable Hydropower Projects now available for Certification under the Climate Bonds Standard.
Get connected with our webinar programme, covering a range of sustainable finance subjects, click to find out more!
Desalination Certification now available under the Climate Bonds Standard!
Conference21: Agenda is available, 5 days spanning across Training, Markets, Transition, Regions, and more...
Resilience is one of the biggest climate issues for emerging economies, read our think piece on agri in India.
New central banks & market neutrality blog post, a climate bonds policy view.
Green Infrastructure Investment Opportunities – Greater Bay Area report is out now! Find out more...
Aiming high & aiming well, Transition needs Ambition, read the latest in our 3-part series

Q3 volumes were driven by both banks and corporates, which accounted for 18% each. Government-backed entities were also active in the market representing 16% of the total, with issuance equally split between developed and emerging markets.

As of Q3 2018, USD66bn worth of green ABS have been recorded in the CBI Green Bond Database, and that represents 14% of cumulative green bond issuance. Covered bonds account for just under 2% of the market with USD7bn, while other secured bonds (including debentures) represent a 1% share of cumulative issuance at USD3.8bn. An in-depth analysis of the diverse bond structures to which the ‘green’ label has been applied to date is available on pages 22-27 of our recently released flaghsip State of the Market 2018 report.

State of the Market 2018: The scale is there in Developed Markets but where are the green bonds?

Climate Bonds’ recently launched Bonds and Climate Change: the State of the Market 2018 report identified a climate-aligned bond universe of USD1.45tn, made up of USD1.2tn from fully-aligned, strongly-aligned and green bond issuers, plus USD250bn outstanding bonds from US Muni fully-aligned issuers.

Green bonds account for a third of the USD1.2bn total – or USD389bn – pointing to a large pool of issuers financing green infrastructure through unlabelled bonds. This highlights the extensive opportunities for growing and diversifying the green bond market.

As underlined by the recently published IPCC special report, upscaling investment flows directed towards financing the low carbon transition is an urgent imperative if we are to achieve net-zero CO2 emissions by 2050.

Developed markets account for 62% of aligned outstanding figures in the climate-aligned universe. Over 50% come from fully-aligned issuers, 15% from strongly-aligned issuers and 35% from green bonds.

The top 10 developed countries represent the majority of volumes (87%). If scale is what we are looking for, then this seems like a good place to start.

We picked the three countries with the largest bond markets among the top 10 DM ranking to highlight opportunities for catalysing green debt issuance: USA, UK and Japan. Read more on pages 3-4 of the Q3 summary. 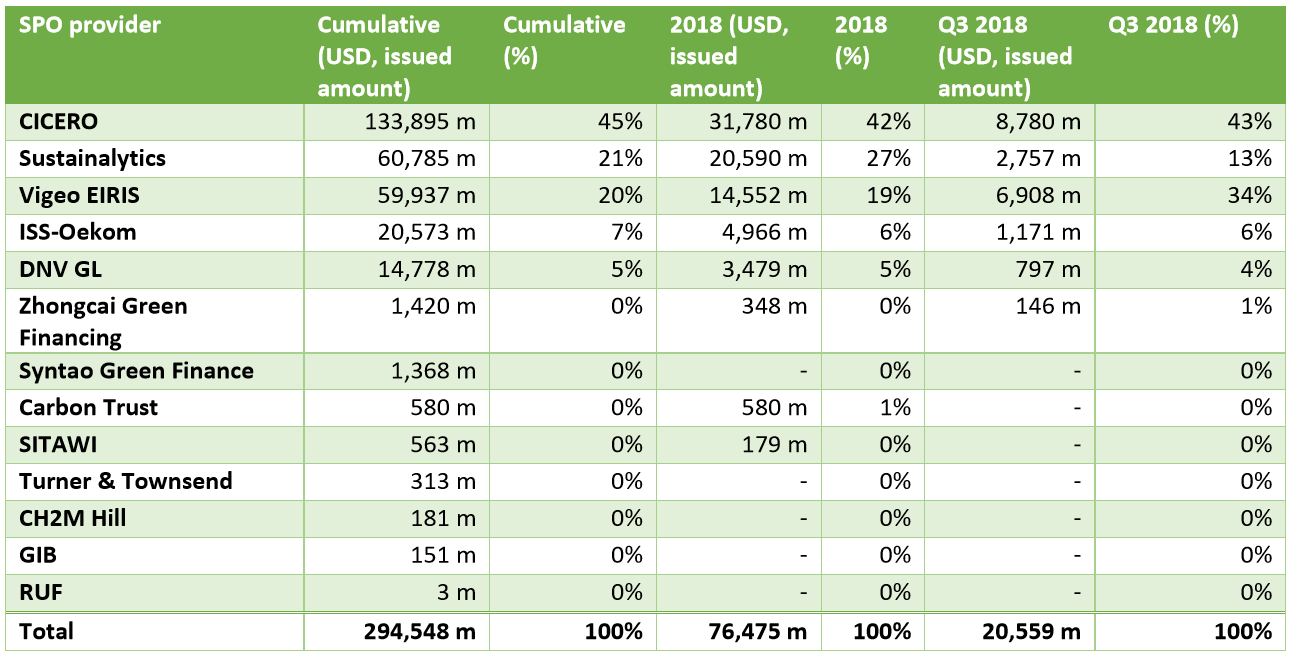 Methodology note: The ranking is only for external reviews which are second party opinions. In addition, external reviews can be provided in the form of verification for Certified Climate Bonds, assurance reports and rating agency green bond assessments/evaluations. 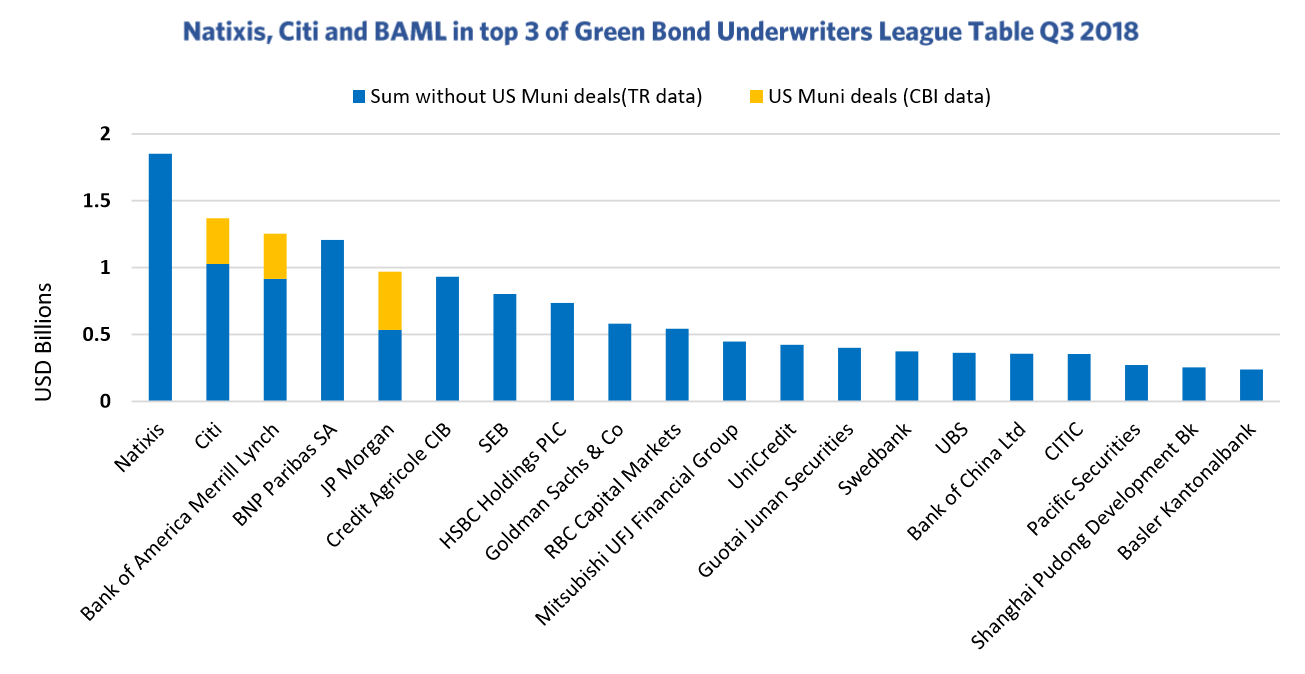 Q3 2018 Underwriter League Table shows Natixis steadily climbing to the top, from 7th place in Q2 and 15th in Q1.  Citi moved into to 2nd place and Bank of America Merrill Lynch retaining a top 3 spot.

Natixis duly deserves applause this quarter since their volume climbed from just under USD500m in Q1 of 2018 to over USD1.8bn in Q3.

In Q3 2018, USD20.5bn worth of green bonds has been listed on a variety of trading venues, accounting for 69% of the total green bonds issued in the same period.

In the trading venue league table below, we have grouped venues under the same stock exchange group. The numbers on top of the bars indicate the rankings of the top 20 venues. 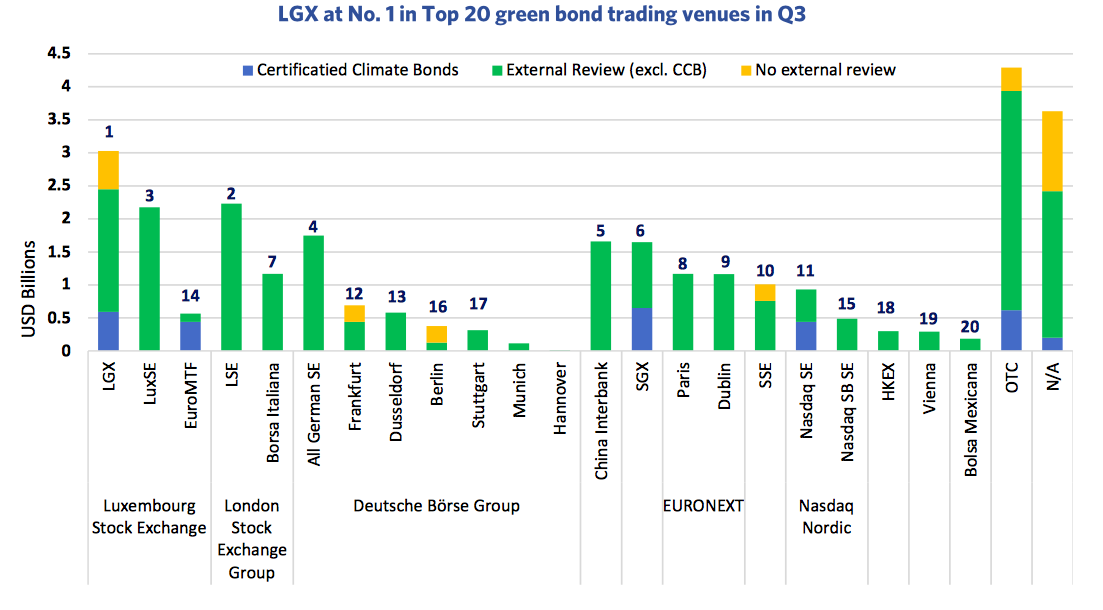 * All charts and analysis are based on preliminary figures for Q3 2018 issuance volume and number of deals, pending the inclusion of Fannie Mae’s September Green MBS deals and 32 deals still under assessment for inclusion in the CBI green bond database.

Since Q3 2016, the underwriters league tables are collated using data from Thomson Reuters except for US municipal bonds which are calculated by the Climate Bonds Initiative. As such, ranking volumes differ from Thomson Reuters tables. Volumes may differ from other league tables as they include all ABS deals and US municipal bonds and exclude bonds which have less than 100% of proceeds going to environmental assets/projects or aren’t within the Climate Bonds taxonomy.