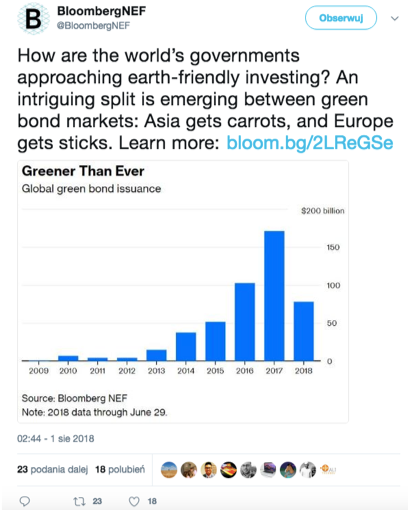 Article analyses tactics of governments, in different regions of the world, aimed at scaling up green finance.

Whether it is national carrots and sticks or local motivations, government-led green bond initiatives are mobilizing billions of dollars every year. In this regard, green bonds are following a path trod by clean energy a decade ago, when many governments around the world took similar approaches to intervention with the renewable energy market.

US green bonds are on the rise. Author looks at reasons why corporates decide to issue.

Sales of green bonds by U.S. companies in 2018 have already topped last year and are on pace for a record, according to data from the Climate Bonds Initiative.

The Climate Bonds Initiative is the closest thing to a gatekeeper for the industry. Through its Climate Bonds Standard and Certification Scheme, it provides the option — but not the requirement — for green-bond issuers to verify that they adhere to a set of principle. (…)

The Bond Buyer, For green bond issuers, the purpose is vital, Paul Burton 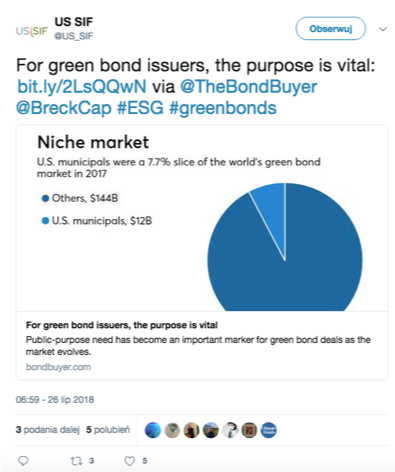 Author dives into US municipal green bonds market after speaking with experts from the investor side as well as academia.

Green bonds, said Wurgler, are slightly larger than average at the CUSIP level and with slightly longer maturity; they are more likely federally taxable, tracing to issuance around 2010; they are typically new-money revenue bonds associated with specific projects; and a subset, around 7%, has certification from Climate Bonds Initiative or other third parties.

FT Alphaville, An environmental run on the bank, Thomas Hale

Thomas Hale looks at an example of reputational damage and subsequent withdrawal of deposits experienced by banks that participated in the financing of environmentally-harmful Dakota Access Pipeline. He thinks that this aspect of environmental activism is one of the important factors behind a rapid growth of the green finance market.

The topic is critical for any understanding of the new field of green finance, which has exploded over recent years. Around $155bn of green bonds were issued last year, almost double the total in the previous year. Banks have established their own green funding rules and frameworks, alongside those established by NGOs. They have also issued green bonds of their own, which implies calibrating certain assets as green, causing green-ness to ripple through the financial system.

Article looks at the Chinese paradox – country that’s world’s biggest emitter is, at the same time, planet’s biggest hope when it comes to reduction of emissions.

In this context the ‘green’ sector in China has boomed: green nergy, green loans, green mortgages, green supply chains, green bonds, emissions trading schemes – the list of policy initiatives, subsidies and incentives is endless. It is expected that China will be ahead of most of the world on phasing out production of petrol cars and it is already leading the way on solar energy and clean technology. 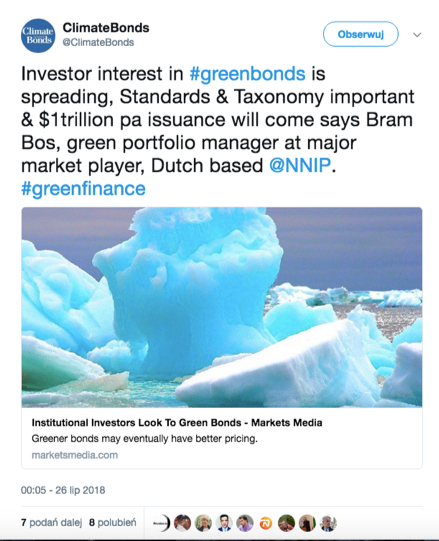 Bram Bos, lead portfolio manager green bonds at NN Investment Partners, said there is “overwhelming” demand for green bonds and there are the first signs of institutional investors in the market.

Article cites chief representative for Asia-Pacific at ICMA who stressed a need of increasing availability of green products to retail investors. 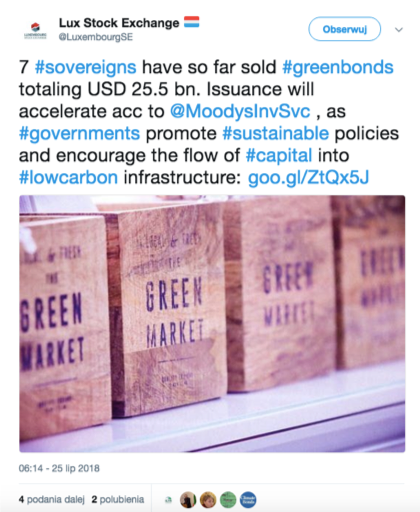 7 countries have already issued sovereign green bond and Moody’s, in a recent report, predicted that the pace of governmental issuance will be on the rise over coming years.

Moody’s also said the deployment of sovereign green bond proceeds to a diverse array of projects will support investor demand. This is in contrast to the broader green bond market, where funds are mostly used for energy-related projects.

Governing, Green Bonds Are in High Demand, But Are They a Better Deal?, Liz Farmer

Author of the article questions the price benefit that some municipal bonds issuers to date obtained when labeling their bond as green.

Another factor driving better rates for some green bonds is the reputation and transparency of the government issuer. 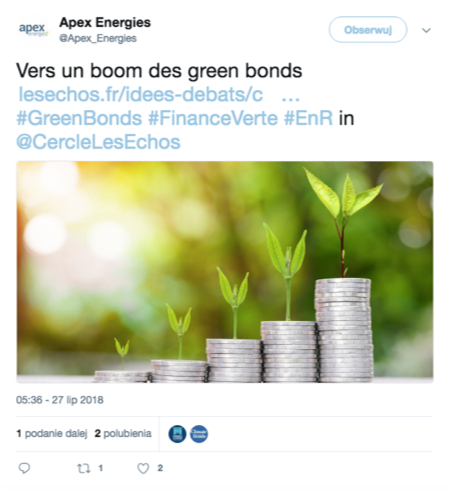 Ireland has been tipped to join a growing number of sovereigns raising finance from the sale of “green bonds”, which may command lower interest rates than mainstream debt at a time when the European Central Bank (ECB) is winding down its €2.5 trillion stimulus programme.

BVP, a leading green investment firm, is aiming to raise €7.5 million which it will use to invest in a number of renewable energy projects and companies across Ireland.

Yet, as Bank of America country head and president Kaku Nakhate points out, local markets have still not understood the concept of green bonds as the West has. Thus, India has raised only $6.15 billion from 16 issuances. 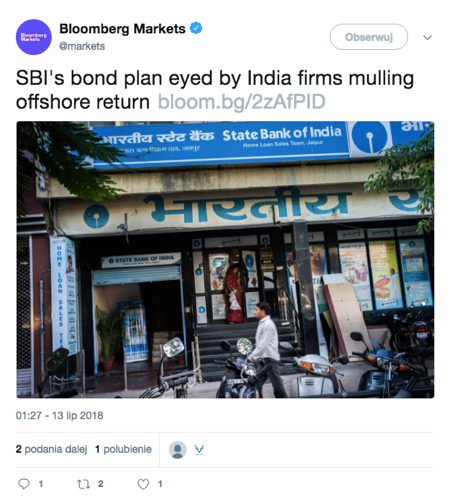 State Bank of India started a roadshow for a dollar-denominated green bond in a time of uncertainty for Indian offshore bond market.

Author claims that since debt issuance in India stalled, there are several green bond issuances on hold and awaiting lower interest rates.

Green bonds of huge amounts from India are stuck because of rising interest rates and global uncertainties, even as the country’s largest lender, SBI, is in the process of going through its maiden issue of green bonds of at least $500 million

Australian ESG market experienced a four-fold increase in less than three years with rapidly growing green bonds accounting for 85% of the $6 billion figure.

Since 2015, Australian public and private institutions have issued over $4 billion in green bonds, with most coming in 2017, compared to the global market with over $US120 billion of certified green bonds issued in 2017, according to the Climate Bonds Initiative (CBI).

According to the report, property and infrastructure investments are the biggest type of investments after green bonds, which RIAA said was responsible for avoiding or abating more than 2.1 million tons of carbon dioxide equivalent.

Guidelines for Morocco’s green bonds market have been released by the country’s capital markets authority.

The new guidelines have been developed by AMMC with advisory support from IFC, and comprise updated guidelines for Morocco’s green bonds market, as well as a new framework for the social and sustainability bonds market, combined into a single reference document.

In July, Egypt approved a legal framework to issue green bonds to support the financing of renewable energy and clean transportation projects.

“We will unveil regulations and measures necessary for the issuance of green bonds in accordance with the best international applications, as part of a partnership with the International Financial Corporation [IFC] (…)” said Mohammed Omran, head of the Egyptian Financial Supervisory Authority (…)

An important speech from the Economic Secretary to the Treasury, in which he expressed an ambition for “green finance” to become simply – “finance”.

Glen, who also serves as City Minister, said the green finance sector was making encouraging progress, citing this week's launch of the largest green bond listing on the London Stock Exchange in the form of a $1.58bn offer from the Industrial and Commercial Bank of China.

The bond have also been certified with the Climate Bonds Standard & Certification Scheme, which ensures that the projects where the resources will be allocated contribute to the reduction of carbon emissions and the mitigation of climate change.

The IFC pointed out that Epsa would be the first company in the real sector in Colombia to use this fixed-income financial instrument exclusively for environmental projects or projects related to climate change.

The bond has been verified by Bureau Veritas, an international verification agency, and Certified according to the Climate Bond Standard & Certification Scheme

The bond will be used to finance distributed solar power projects across the country – the company says Brazil’s solar market is growing rapidly and green financing solutions are “critical” to enable the market to continue to scale. 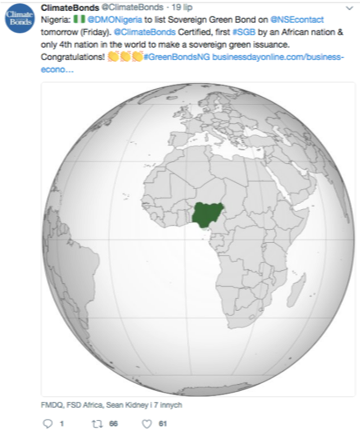 Nigeria’s Minister of State for Environment Ibrahim Usman Jibril says the listing of the 10.69 billion naira, 5-year Sovereign green bond is the first of many to come, as the ministry aims to return to the market before the end of the year.

An interview with Patience Oniha, Director General of Nigerian DMO. 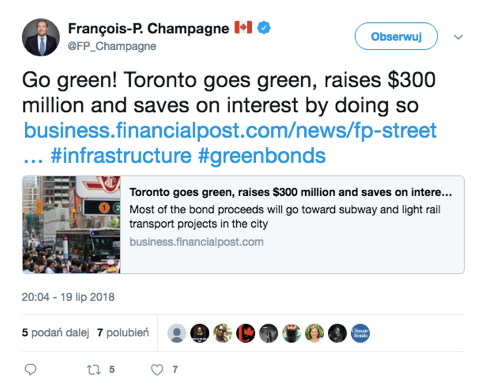 And for the citizens of the country’s largest metropolis, the 30-year, $300-million transaction brings a financial benefit: the yield (3.213 per cent based on a 3.20 per cent coupon) required to clear the market was a tad lower than what a traditional debenture would have cost.

Toronto follows Ottawa as the second Canadian city to engage in green financing.

The National Wildlife Federation is selling about $11 million of bonds Wednesday to refinance a loan that was used to build its headquarters in the Washington, D.C. (…)The foundation’s headquarters, which opened in 2001, is designed to reduce energy usage, bond offering documents say, and uses solar panels to heat its water.

Asian Development Bank piced up €600 and was able to tighten pricing as it sold a green bond in euros for the first time.

Proceeds of the green bond will support low-carbon and climate resilient projects funded through ADB’s ordinary capital resources and used in its non-concessional operations.

The green bonds are part of the Indonesian government's efforts to turn the Sustainable Development Goals (SDGs), which came into effect in January 2016, into a success.