The Climate Bonds Initiative just released a new report examining the latest green bond market developments in Europe both at a regional and country level.

Sponsored by White & Case, the report was launched at a joint event between Climate Bonds and White & Case in Frankfurt yesterday. The report presentation launch was followed by a panel discussion of financial, corporate, technical and legal experts, including our Director of Investor Outreach, Manuel Adamini. In case you missed it, there will be a launch event in London on the 22 May. An event in Paris in June (date TBC) completes the European launch.

Sponsored by White & Case, the report is the latest in the new 2018 series of Overview and Opportunities-based analysis following the Green Bond Opportunities in France report published in April.

Europe at the forefront of green bond issuance

The first green bond issuance was issued in 2007 by the European Investment Bank (EIB) to raise funding for climate-related projects. Europe has remained a cornerstone of the global green bond market, with cumulative issuance totalling EUR122bn, representing the largest regional market.

European issuers span the continent and the spectrum of issuer types. 145 entities have come to market, or around a third of the global total. They have issued in a variety of debt formats, currencies and tenors. Sector diversity has grown over time. 98% of issuance benefits from external reviews and reporting standards are high. 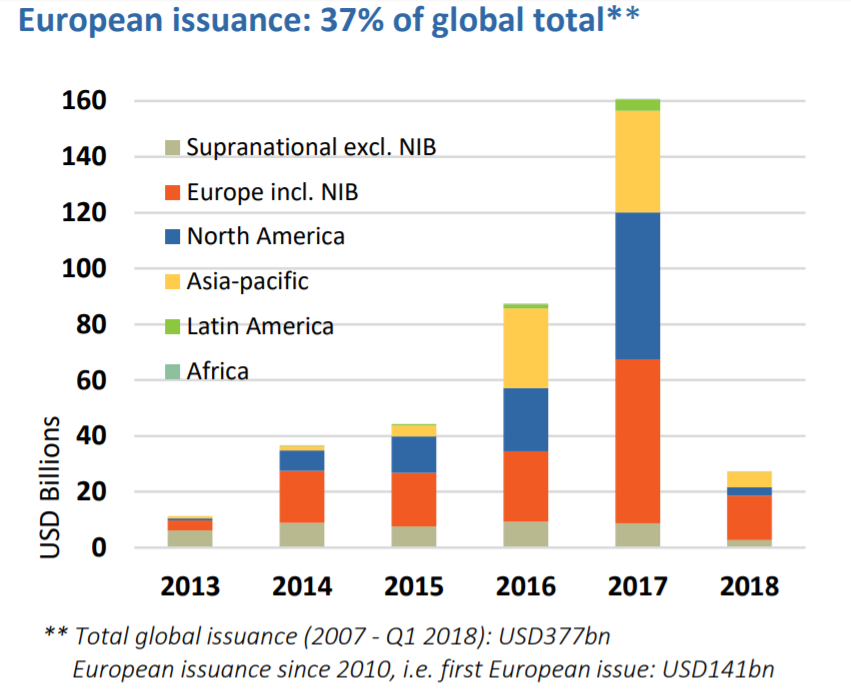 Issuers as of end of Q1 2018 include 48 companies in the energy sector, 35 financial institutions, 23 property companies, 17 local governments and three sovereigns. The 7 debut issuers from 2018 and 48 from 2017 have already contributed over EUR34bn to the market: half of that linked to sovereign issues from France and Belgium.

Diversification to date is a big accomplishment but it would be good to see more corporate issuance, especially from nations with large economies and highly-developed and active bond markets including the UK, Germany and France. 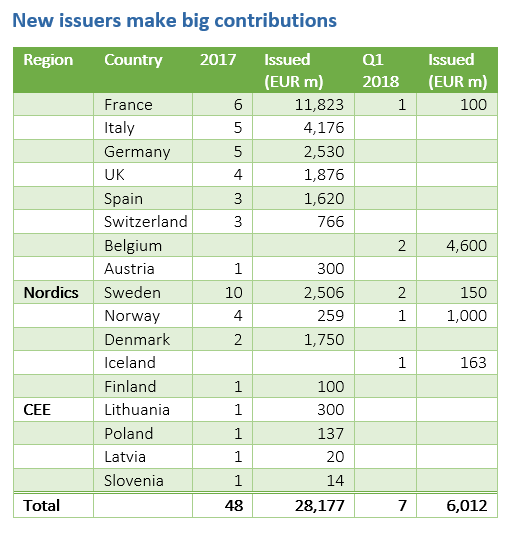 Energy at top spot for allocations, but Buildings and Transport rising

European issuers have always allocated a substantial part of green bond proceeds to the energy sector. However, the share of Energy in the overall mix has dropped in recent years as the amounts channelled towards Buildings and Transport have risen. 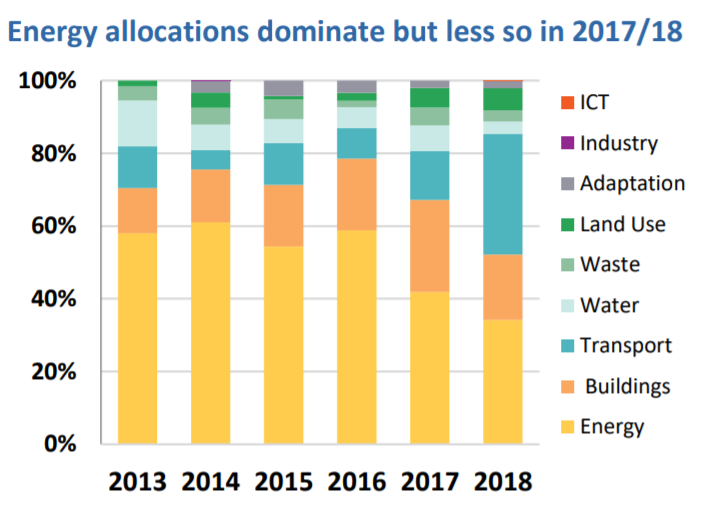 Europe has spearheaded the development of the green bond market, fostering engagement at a global scale. The sample of identified potential green bond issuers spanning the climate-aligned sectors in our taxonomy proves that the region is still far from reaching its full potential.

As the market keeps expanding, we expect to see the corporate and banking sector taking on a bigger role, with green bond deals diversifying further.

Strong political impetus is expected to continue driving market evolution and improvement, such as through the adoption of a common EU green asset taxonomy in 2019 as part of the Commission action plan on sustainable finance, banks implementing the reporting recommendations set out by the Financial Stability Board’s Taskforce for Climate-related Financial Disclosure and starting to green-tag loans.

Initiatives around energy efficiency such as EeMap for mortgages and the development of European Property Assessment programme (E-PACE) should provide further support.

Don't forget: Join us and White & Case in London on May 22nd for more on the European green bond market. We'll update you soon on the launch event in Paris.