“The market needs strong leadership now. 2016 will be a tell-tale year for Canada. With leadership, 2016 can be the year Canada’s green bond market really goes mainstream.”

Yesterday saw the 2016 Canada Edition State of the Market report launch with our long term partner the Smart Prosperity Institute, kindly hosted by HSBC and supported by Corporate Knights.

The report marks specific highlights from the current year, emerging trends, and identifies specific opportunities for market development of green bonds in Canada. 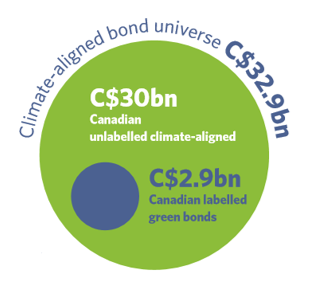 Speaking at the launch, Yvan Baker MPP announced on behalf of the Minister for Finance that Ontario would issue its third green bond during the current fiscal year.

Ontario made its inaugural CAD 500m green bond issuance exactly 2 years ago with the proceeds allocated to public transit projects, in particular the Eglinton Crosstown light rail in Toronto, as well as to other projects under their green bond framework including green buildings, clean energy and technology.

For its second CAD 750m green bond issued earlier in 2016, the Province will use the bond’s proceeds to finance eight environmentally-friendly infrastructure projects including the Eglinton Crosstown, the GO Transit Regional Express, Next Bus Rapid Transit and other green projects.

Michelle Brownlee, the report’s co-author and Director of Policy at the Smart Prosperity Institute.

“Green bonds have the potential to be a key tool to help finance Canada’s transition to a low-carbon economy and to meet global, national and local sustainability objectives. The market needs strong leadership now. 2016 will be a tell-tale year for Canada.”

“With leadership, 2016 can be the year Canada’s green bond market really goes mainstream.”

“With a number of major investments required in Canada in the coming years in the areas of clean water, public transit, clean infrastructure, climate adaptation, climate mitigation and eco-innovation, now is the time to understand how green bonds can be used to raise capital.”

“Canada has a unique opportunity advance on green finance. Large pension fund investors, and a well-developed banking and insurance sector can act as building blocks for a domestic green bonds market, to help Canada meet its climate objectives and emissions goals.”

“This report identifies the key policy shifts that advance investment in smart, clean and green infrastructure on a national scale using green bonds as a financing mechanism."

2016 remains an important opportunity for the federal and provincial governments to take action and show the leadership necessary to accelerate market growth.

Ontario is now well in the lead with plans to issue its third green bond.

This is our 5th State of the Market Report and our 5th Canadian edition of the report. Thanks to the foresight of the Smart Prosperity Institute, Canada was the first special market report from Climate Bonds way back in 2011.

Together, we are committed to growing green finance opportunities and sustainable investment in Canada.

PS: Let’s not forget Canadian born banker Mark Carney and his Berlin call to action on green bonds and green finance; see our last blog for the highlights.