Q3 sees the biggest single issuance this year so far of $1.1bn (thanks to NWB Bank) and overall total issuance is $6.9bn for the quarter. The green bond market has slightly slowed from a high in Q2. But, it seems like the issuance is going up in size – the average in Q3 bonds ($204m) is well above the Q2 figure of ($144m).

A big leap forward by HSBC to rank second in Q3, first time to join the quarterly top five underwriter this year! All of the green bond deals it took part in are joint underwriting with other entities, adding up to $894m. Three of its deals – NWB Bank, KfW and EIB – are among the five largest deals of the quarter, pushing HSBC much forward this quarter. HSBC were also the bookrunner for the first corporate green bond in India issued by CLP Wind Farms India.

BAML, who is the leader in the YTD league table (see below), remained in the top 3 but slightly slipped to the third this quarter. It remains active in the market, underwriting a total of eight deals worth of $845m, in which three are among the five biggest deals of Q3. It is the bookrunner for all of its green bond deals – two bonds for TerraForm Power, EIB, two bonds for SolarCity, NWB Bank, and Nordic Investment Bank, and the sole underwriter for the green guarantees by OPIC.

Closely following BAML is Barclays made a big jump from 13th place in Q2 to the 4th in Q3. All of its six green bond deals are jointly underwritten with other entities, in which four of them are listed in the five largest deals of the quarter. Although the number of deals it underwrote is less than the top 3 underwriters, the total amount issued is not much less at $849m. 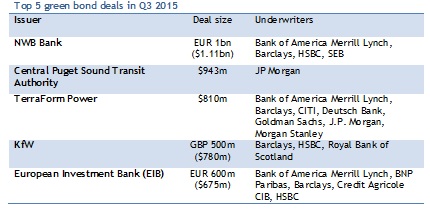 New in the top 20 is Bank of China, signalling the recent proactive initiatives in mobilising green bond market in China. With the exciting momentum for green bonds in China and Asia, we are expecting some new underwriters from Asia in Q4 scoring in the league table!

Zoom out to the year-to-date league table, the places shuffled around a little bit while the underwriters often sit at top 5 remains – Bank of America Merrill Lynch, JP Morgan, CITI, Credit Agricole CIB and Morgan Stanley. 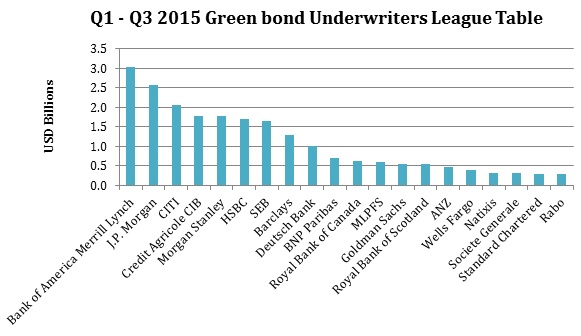 There are quite a few green bond league tables around these days; Environmental Finance launched its green league table last week with very similar results to our Q3 findings. Bloomberg New Energy Finance’s (BNEF) league table has the same underwriters in the top 5 for Q3, but the ranking is slight different because BNEF also includes unlabelled project bonds, US municipal Clean Renewable Energy Bonds (CREBs) and Qualified Energy Conservation Bonds (QECBs) in their numbers.

There are plenty of ways to make a league table and each bring with them different outcomes, so here are a few notes about our league table: