SEB tops annual Green Bond Underwriters League Table – by a whisker, but Q4 results have Morgan Stanley & JP Morgan on top. Plus we set banks underwriting targets for 2015. Cheeky, yes, but someone has to push them.

Morgan Stanley (MS) tops the Q4 underwriter league table, making $1.1bn of green bond deals during the quarter, with JP Morgan following closely in second place with $887m of deals. Both were carried over the line by big municipal green bonds, which pushed them ahead of staunch rivals Bank of America Merrill Lynch (BAML) and Citi, who come in third ($763m) and fourth ($756m) respectively. 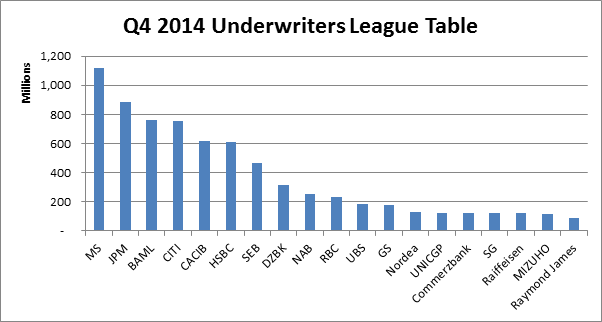 Last quarter’s (Q3) leaders, Credit Agricole CIB (CA-CIB) and SEB, slipped down to fifth and seventh place for Q4, with HSBC sneaking in between them to come in sixth, climbing up the rankings by being involved in two of the five largest deals of Q4.

KfW’s $1.5bn green bond was the biggest deal of the quarter and helped push BAML (ranked 3rd), Citi (4th) and Morgan Stanley (1st) to the top of the Q4 table. Morgan Stanley’s victory was also through their co-lead on the EIB $1bn green bond along with JP Morgan (ranked 2nd), while BAML was also involved in the Ontario green bond.

NAB and DZ Bank also made it to the top 10 – both on the back of only one deal: NAB managed its own inaugural green bond, A$300m, in December, while DZ Bank’s only deal in Q4 was NRW Bank’s second green bond offering, of which DZ co-led with HSBC,

Commerzbank, JPM, Raiffeisen, Societe Generale and Unicredit all made the list from being part of Verbund’s inaugural green bond deal.

Moving on to the year as a whole, it’s clear that it’s been a busy year for the banks’ green bond teams, completing $36.6bn of deals in 2014.

SEB was the winner of the top spot of the 2014 green bonds underwriter league table; over the year, SEB was involved in $3.8bn of green bond deals. Though it was a close race between SEB, BAML and Credit Agricole; in fact, BAML actually finished ahead of SEB in Bloomberg’s version of the green bond league table. The difference is because Bloomberg includes unlabelled ABS and project bonds linked to clean energy in their numbers, while we only include the labelled green bonds for our league table – this is the same divergence that explains the difference between our total for 2014 issuance of $36.6bn and Bloomberg getting the tally up to $38bn.

The battle for second place was just as close with less than 40m (!) between BAML in second with $3.68bn and Credit Agricole in a close third with $3.65bn.

Despite leading the Q4 2014 league table, Morgan Stanley came in fourth in the overall year standings with $2.8bn. JPM, the runner-up for Q4, had a strong second half of the year, underwriting green deals for several US municipalities and supranational issuers, but they only claimed 5th place for the year overall, with final total of $2.4bn.

Looking ahead to 2015: Giving the bankers a challenge!

You may ask - why do we care what deals what banks are doing? Well, without investment banks, there would be no green bonds market: they are important in seeking out potential issuers and bringing the bonds to market. After a great year in 2014 we figure the bankers will soon be setting their performance targets for 2015. We believe we can reach $100bn of green bonds issuance globally in 2015, and doing so would take a powerful message about investors and issuers driving change to governments at the UN Climate Conference in Paris in December.

Towards that end, and as bankers are competitive creatures who love a good challenge, we have set some targets for each bank for green bond underwriting for 2015. We’ve assumed we’ll see some $20bn from new entrants we expect to see in the market, such as ANZ, Wells Fargo, Industrial Bank of China and Standard Chartered. So we’ve set targets below at 2.5 times 2014 levels – eminently achievable; but of course we hope they do much better! 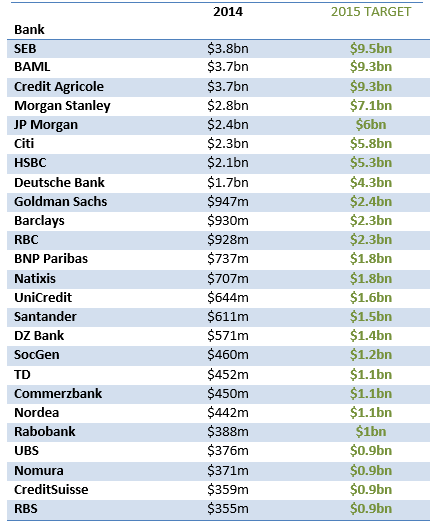 There are plenty of ways to make a league table and each bring with them different outcomes so here are a few notes...

Our blogs are written by a team: Sean Kidney, Tess Olsen-Rong, Beate Sonerud, with a bit of help from Justine Leigh-Bell.