2013 has been a big year for green and climate bonds - it was the year that everyone started talking about them. It was the year that totals outstanding of explicitly green “labelled” bonds doubled, the issuer list diversified and investors in both the mainstream and ESG/SRI markets became interested. Here is short overview of developments.

While the terms green and climate bonds are generally used interchangeably, they refer to bonds whose use of proceeds is tied to climate change related investments, or, in some cases, wider environmental projects. They can be general corporate bonds where the finance is earmarked for climate projects but backed by the issuer’s balance sheet, or asset-backed where the bond payments are linked directly to the performance of the asset.

They have cause. The International Energy Agency (IEA) says the current global emissions trajectory will lead to 6ºC “catastrophic” global warming. They estimate that the extra investment required for the world to stay within 2ºC of global warming is approximately $1 trillion per annum until 2050 (they also note that in doing so the world would save itself $100 trillion in fossil fuel costs).

The key word is “investment”, not “cost”. If structured correctly these generally high capital expenditure investments will be able to deliver stable returns to investors over a long period. Bond financing is an ideal tool for high capex, long payback infrastructure projects (like renewable energy or transport infrastructure); moreover bonds have been successful in financing vast infrastructure projects throughout history – rail, sewers and highways. Given that bonds are the largest single pool of capital ($80trn vs $53trn in equities), mobilisation of the bond market is key to meeting climate finance targets.

While bonds have been issued to raise finance for low carbon infrastructure for decades, particularly for rail, they have rarely been labelled as ‘green’ or ‘climate’. The Climate Bonds Initiative estimates that this unlabelled market linked to climate change stands at over $340bn outstanding predominantly in transport but also in energy, finance, agriculture and waste.

Taking ESG issues into account in fixed income is very different to equities. Bonds can be directly linked to low carbon infrastructure rather than a whole company thus giving investors a rare opportunity to invest directly into infrastructure of technology with a high environmental impact. This means that company-level equity metrics such as ESG scores have limited ability to determine what a bond is financing and whether it has an environmental impact. It's therefore possible that companies with good ESG scores could issue bonds that have zero impact on reducing emissions while those with low scores could issue bonds with a significant impact. For example, a utility might have a low ESG score due to coal assets but as energy generators they are also a vital part of the solution.

They could therefore issue a bond specifically to build a wind farm which would qualify as a green bond (if it meets pre-determined criteria and financial tracking) thus enabling investors to invest directly in the transition without being invested in the company as a whole.

The first bond specifically labelled as green was issued in 2007 by the European Investment Bank (EIB) – a ‘Climate Awareness Bond’ where proceeds were specifically linked to renewable energy and energy efficiency. Since then, other issuers have joined this labelled market, including the World Bank, African Development Bank, the International Finance Corporation (IFC, a division of the World Bank) and the European Bank for Reconstruction and Development (EBRD) - but until 2013, the market was limited to AAA-rated development bank issuers. By the end of 2012, approximately $7.8bn had been issued in this labelled market, $6.2bn of which was still outstanding. 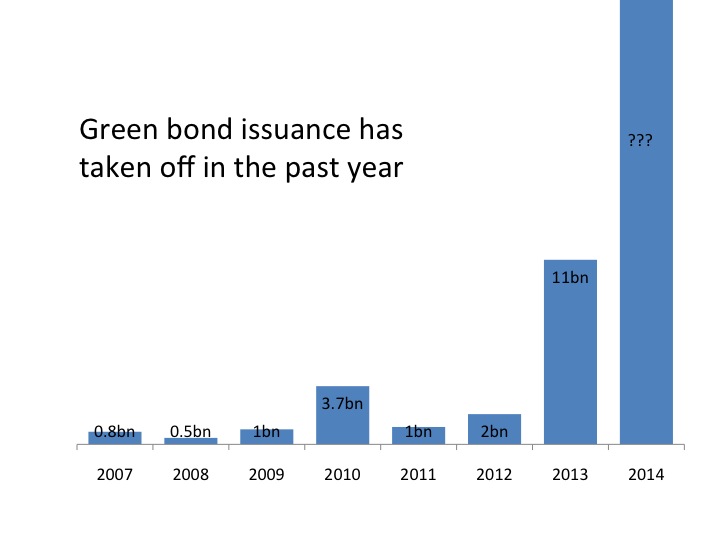 For five years, the labelled market meandered along with a few bonds issued each year and then in 2013 it went crazy. In early February 2013, the IFC issued a $1 billion green bond, followed shortly later by the EIB  issuing a EUR650mn Climate Awareness Bond, which it then tapped again to make it a EUR900mn. These bonds made heads turn – banks became interested in structuring similar deals and investors began to see that the market could meet size and liquidity requirements.

Over 20 new green bonds followed making 2013 a bumper year and broadening both the issuer and investor base. By the end of 2013 the market stood at approximately $15bn outstanding, with most new bonds larger than $250mn.

There are a few notable features about this market growth:

So 2013 has been a landmark year for green bonds and the one which we think has set the stage for rapid growth ahead. But we would like to add a cautionary note - with such rapid market growth there is always a risk that the market may deviate from its goal and greenwash will prevail.

In November, the World Bank hosted a Green Bonds Symposium where they stated that the goal of the market is ‘to mobilize finance for environmental challenges at scale’. The best way to ensure that finance is truly addressing environmental challenges (and meets the $1 trillion required to head off catastrophic climate change) is for each bond to meet clear, transparent (publicly available) environmental impact criteria in order to be called ‘green’ or ‘climate’. Such criteria (and whether the issuer meets them) should be determined by independent experts and academics rather than by issuers or investors (and yes, full disclosure here, we do organize one such scheme: the Climate Bonds Standard).

Why criteria? Well, there are plenty of investments that can have a positive environmental impact but only with strict caveats – think of biofuels, some biofuels offer a genuinely low carbon alternative to fossil fuels (2nd generation, some sugar ethanol etc.) while others have highly negative impacts on the environment and are highly carbon intensive to farm and produce (palm oil, corn ethanol) so we need criteria to define which is which. This doesn’t have to be a complicated carbon accounting system but it should be determined using a science-based framework.

At the moment, the market is on a knife edge and could go either way – a mush of greenwash or a benchmark for good standards leading to high-impact investments. Currently, there is limited understanding of the value of third party certification in avoiding greenwash, partly because the market is still small and the majority of issuers have been 'trusted' development banks. However, as more corporates join the market, standards will become more important - hopefully it won't take a big scandal for investors to be asking the right questions and demanding standards.

As the market grows, we hope this will not be the case and that rigorous, transparent third party certification will be the norm. There are signs that this could be the case – in January 2014 a coalition of major global banks launched the Green Bond Principles, a call for issuers to be transparent about what is included as green. All the banks involved in the Green Bond Principles are now actively working to have green bonds issued. We expect the size of the now $15 billion labelled green bonds market to nearly double in 2014 we now must work to ensure that it is truly addressing environmental challenges.